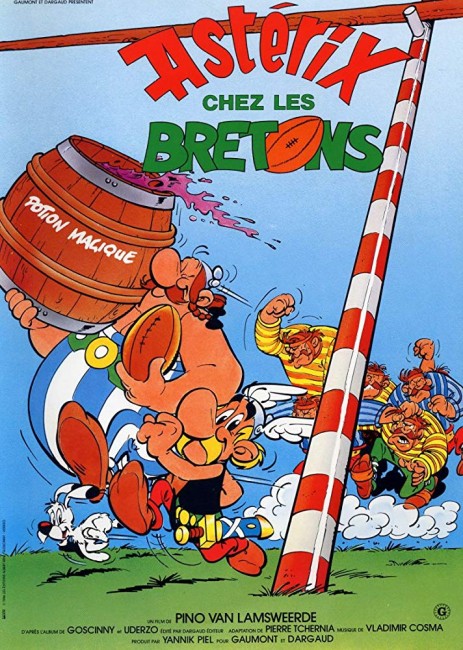 The Romans invade Britain so the Britons go to enlist the help of their cousins in Gaul. In Gaul, Asterix and Obelix are bored because all the Romans are away and eagerly take the opportunity to go to Britain and help defeat the Romans there. However, once in Britain, the barrel containing the magic potion that grants them super-strength is confiscated by the Romans.

Frenchmen Rene Goscinny and Albert Uderzo created the comic-book character of Asterix in 1959. The character of the little man Asterix, his lovable oaf of a companion Obelix and the comic exploits of a single village in Gaul standing up against the entire Roman army proved a massive hit with audiences the world over. The characters have passed through 34 books to date and been translated into 28 languages.

This film adapts the 1966 comic-book story direct and is very faithful to the original. As such, it is lively and entertaining, although the story does drag somewhat in the middle. As always (and as with the comic-book originals), while essentially children’s stories, there is another level of sly satire to the work – part of the reason that made the comic-books so popular with adults. Here the film gently satirises the foibles of the English – with parodies of cricket and football, and the Britons breaking off in the midst of battle to have tea and refusing to conduct battles because of something called ‘the weekend’.

The English-language voicing of Asterix is absolutely perfect, with Jack Bearber catching just the right sense of the diminutive man’s chirpy happy-go-lucky nature. Obelix however comes across as far thicker than he does on the comic-book page. It is also slightly peculiar to see that when Asterix and Obelix reach Britain the signs are not, as one might expect in English, but in French with the translators clearly not having made the effort to draw new scenes for the English-language release.

The other Asterix films are:- Asterix the Gaul (1967), Asterix and Cleopatra (1968), The Twelve Tasks of Asterix (1976) – the latter two both being co-directed by Goscinny and Uderzo – Asterix Vs Caesar (1986), this, Asterix and the Big Fight (1989) and Asterix Conquers America (1994), all made by the French animation company Dargaud; several animated films from other companies with Asterix Conquers America (1994) and Asterix and the Vikings (2006) and then the CGI-animated Asterix: The Mansion of the Gods (2014) and Asterix: The Secret of the Magic Potion (2018); and the live-action productions Asterix and Obelix vs Caesar (1999), Asterix at the Olympic Games (2008) and Asterix and Obelix: God Save Britannia (2012), the latter being based on the same comic-book as this film, which all feature Gerard Depardieu as Obelix.