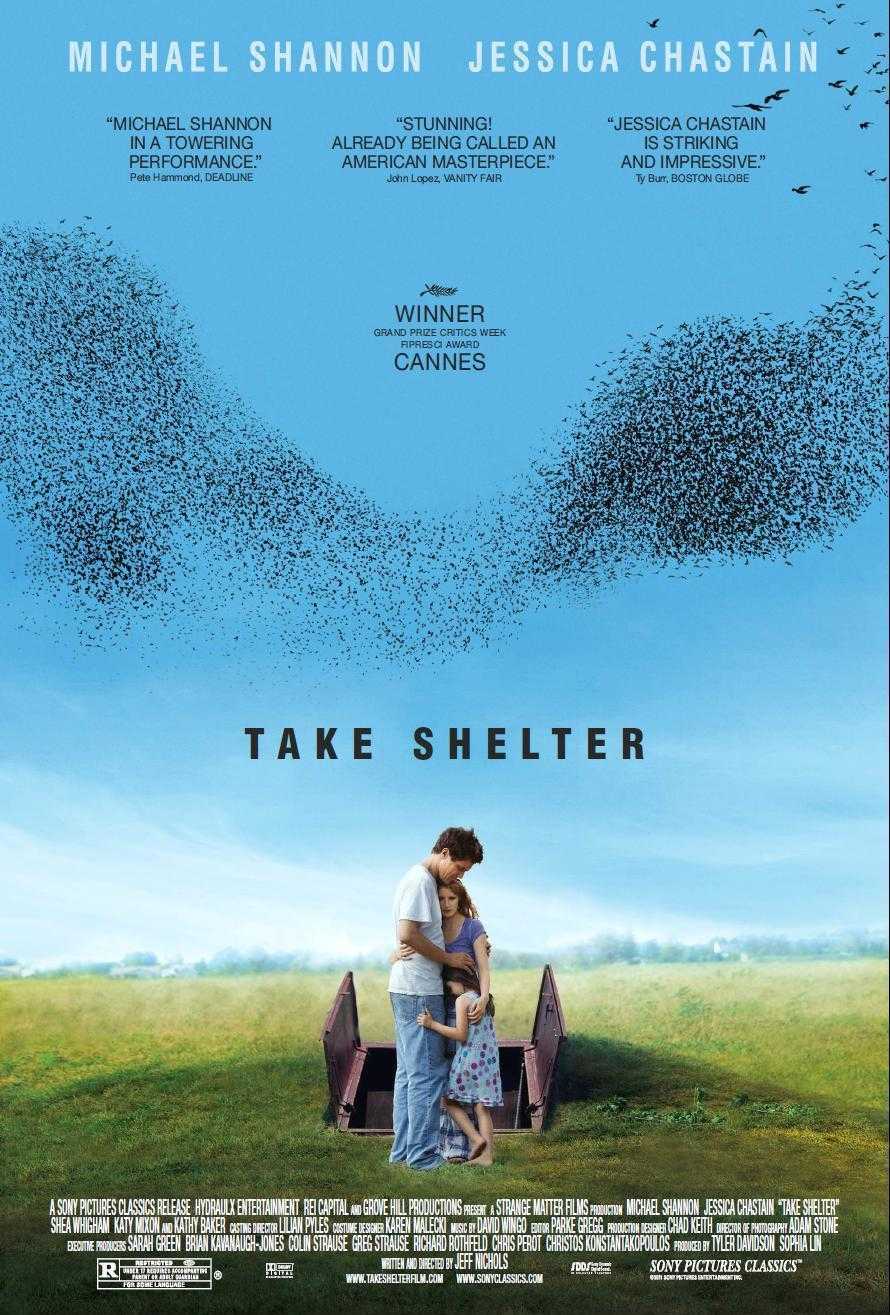 Curtis is a construction worker living in rural Ohio with his wife Samantha and a young deaf-mute daughter Hannah. Curtis suddenly becomes troubled by a series of visions and dreams – of a coming storm of vast magnitude, swarms of birds, and being attacked by his dog and co-worker. The dreams and visions become deeply troubling. He seeks psychiatric help and medication, thinking that maybe he is developing paranoid schizophrenia as his mother did. The visions persist and Curtis is driven to take out a loan so that he can expand the tornado shelter in his yard. However, the costs, the risks he takes and his unpredictable changes in behaviour have everyone around him, including his wife and friends, thinking that he is going crazy and his boss then deciding to fire him.

Take Shelter is a film that emerged with a great deal of buzz following its premiere at the 2011 Sundance Festival. It was the second film for Jeff Nichols who had previously made the little-seen Shotgun Stories (2007), a similar slow, naturalistic dramatic work set in rural America (and also starring Michael Shannon) and went onto the equally acclaimed Mud (2013) with Matthew McConaughey as a wanted fugitive on the run, followed by the sf film Midnight Special (2016) and Loving (2016).

The surprise about Take Shelter is that it comes from Hydraulx Entertainment, a company better known as the producers of visual effects on high-profile films such as Fantastic Four (2005), Avatar (2009) and 2012 (2009), among many others. The names of Hydraulx founders, brothers Colin and Greg Strause, who also directed AVPR: Aliens vs Predator Requiem (2007) and Skyline (2010), are on the credits as executive producers.

Seeing the names of the Strause Brothers and Hydraulx’s presence gives Take Shelter a certain focus that it might not have had without them – for one, it pushes you to regard it as a fantastic film and a special effects vehicle, whereas the promotion gives all impression of Take Shelter being an indie film about a man with possible mental illness. Effects do turn up – flocks of attacking birds, storm clouds brooding on the horizon – but they are not Take Shelter‘s focus, merely there at the behest of the story. Certainly, this is not the sort of film that you would imagine a special effects company co-producing, as the work they deliver throughout remains unobtrusive rather than highlighted. If nothing else, it shows the Strause Brothers branching out and seeking to make a film that is very different to the effects vehicles that they have made so far when they have taken the director’s chair.

The film that Take Shelter most resembles is Field of Dreams (1989), which similarly had ordinary everyday Midwest farmer and family man Kevin Costner receiving a vision that directed him to build a baseball diamond in his cornfield. Field of Dreams was an optimistic work that nostalgically pined for the past and the loss of the American dream. You could describe Take Shelter as maybe the anti-Field of Dreams. Where Field of Dreams was lit up by nostalgia and boundless optimism, Take Shelter is a film of deep pessimism. Field of Dreams left its audiences with no doubt about the veracity of Kevin Costner’s visions and regarded others as lesser for failing to take the leap of faith to believe too; by contrast, Take Shelter shows that nothing that Michael Shannon sees can be regarded as sure. Indeed, his first step before he even starts building things in the field is to consult a psychiatrist and start taking medication, believing he is suffering from schizophrenia.

The entire way through the film, we are left in a state of uncertainty, unsure whether Michael Shannon’s visions are real or the hallucinations of a mentally ill mind. As opposed to Field of Dreams, which was about the belief that having great optimism and faith in an unseen idea would eventually bear fruits, Take Shelter shows the price of having visions beyond the pale in terms of fraying marriages, looming financial ruin, the loss of friendships, social ostracism and with Michael Shannon eventually being fired from his job – and moreover with no guarantee that Shannon’s faith will be rewarded for his perseverance. Rather than Fields of Dreams, maybe the film that comes closer to what Take Shelter does might be The Rapture (1991), which had Mimi Rogers following visions about the Biblical End of the World and coming to an end that showed her bowed under the weight of following the course of such faith.

Jeff Nichols’ approach the entire way through is naturalistic and ordinary – the film rarely moves out of being a slow observation of life in a rural backwater. Michael Shannon gives a fantastic performance as a regular family man who slowly makes a descent into something that tears him apart. Shannon’s slightly lugubrious slowness and oddly lumpen face adds a blankness to the character that makes his struggle all the more expressive. It is a performance that takes place in slow absences and when Shannon does finally erupt during a scene at a public gathering, the results are explosive. Jessica Chastain – in her second venture into Midwest familial turbulence this year, she also making a major breakout in Terrence Malick’s The Tree of Life (2011) – does a fine, subtly nuanced job, even though largely being confined to standing on the sideline wringing her hands.

The only disappointment is how Take Shelter falls back on a very traditional ending. [PLOT SPOILERS]. The film essentially paints itself into a corner with its hovering in a state of ambiguity about Michael Shannon’s visions – the only choices for its denouement is either to confirm that he was deluded or was right all along. Instead, the film tries to offer up an ending in which both are true. We get an appearance of the storm, see Michael Shannon and Jessica Chastain rushing to the shelter and spending the night, before a long suspensefully drawn out scene where they debate about leaving, with he insisting that the storm is still raging outdoors and she claiming that it is not, which ends with him opening the door and going out – only to find that nothing has changed, that life seems to be happening as normal as the neighbours clean up in the aftermath of the storm. It is an emotionally shattering letdown that finally seems to come down on the side of his being mentally ill after all.

[PLOT SPOILERS CONTINUE]. There is a subsequent scene where they undergo counselling and go on vacation. At the fadeout, there comes a maddeningly cliched twist where Michael Shannon is playing on the beach with daughter Tova Stewart and suddenly Jessica Chastain comes out to see vast storm clouds on the horizon and feels drops of viscous brown liquid falling onto her hand. It is an ending that you could easily see coming. I was disappointed in that Take Shelter follows a great build up with something so predictable when that it had the capacity to end in far more interesting ways than that.

Both Michael Shannon and Jessica Chastain received a number of awards for their performances in 2011 year end critical awards, although none at the major awards.

(Nominee for Best Actress (Jessica Chastain) at this site’s Best of 2011 Awards).