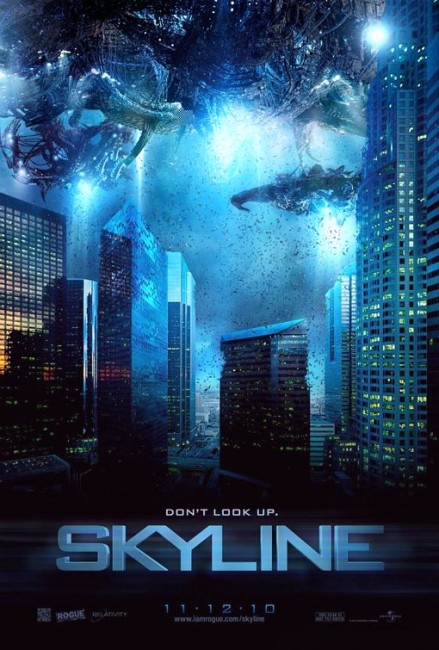 Jarrod and his girlfriend Elaine arrive in Los Angeles as guests of his best friend Terry who has found great success since they last met. At a party, they learn that Terry has been making arrangements for them to move there. Elaine also reveals to Jarrod that she is pregnant. They are woken at 4:30 am as strange pillars of blue light appear out of the sky. It becomes apparent that if people stare into the lights it mutates their body chemistry whereupon they are sucked up into the clouds. Jarrod starts to be affected but they are able to drag him back and shut the curtains. As they watch outside, the entire city is devastated as bodies are sucked up into the lights en masse. Soon after, giant alien ships appear out of the clouds. As they debate about the best means of survival, giant monsters and robotic probes appear and scour the streets and apartment buildings looking for survivors.

The Brothers Strause made their directorial debut with AVPR: Aliens vs Predator Requiem (2007). Almost nobody, not even the die-hard fans of either series, had anything good to say about Aliens vs Predator Requiem and it did negligible business at the box-office. In most other Hollywood circles, that would have meant the end of the directorial careers of the Brothers Strause and we would have never heard from them again outside of the effects department. Determined that this would not be the case, the Brothers Strause went away and financed Skyline out of their own pockets. The script came from two Hy*drau*lx employees, the entire film was shot around Greg Strause’s apartment building in Marina Del Rey using largely unknown actors and the effects completed with the use of the Hy*drau*lx facilities, with the film being brought in on only a modest $10 million budget. Some controversy occurred when the producers of the subsequent Battle Los Angeles (2011) sued, claiming a conflict of interest over the fact that they were also producing a film about an alien invasion in Los Angeles and had contracted Hy*drau*lx to provide effects and not made aware that the Strause Brothers were making a rival alien invasion film.

Skyline was largely an unknown until the first trailers and posters started to appear two months before the film’s release. There was scanty material available on the film and it was impossible to tell what Skyline was about from its posters alone. The appearance of the first trailers certainly elevated interest, making Skyline appear to be a successor to Independence Day (1996). One greeted it somewhat dubiously with AVPR: Aliens vs Predator Requiem still standing as a black mark against the Brothers Strause. This was at least counterbalanced by the fact that they had financed and made Skyline themselves, with this presumably meaning that what we would be seeing on screen would be a largely uncompromised artistic vision on their part.

The Brothers Strause certainly hold one’s interest. Unlike a great many effects people that turn directors, they know how to stage their effects dramatically and come up with some amazing set-pieces – the appearance of the beams of light over the city and images of hordes of bodies being sucked up into the sky; the UFOs emerging out of the clouds; the scenes with squadrons of fighter planes and stealth bombers attacking back against the alien ships, culminating in the launching of a nuke (although I find it hard to believe the military would sanction launching a nuke over domestic civilian areas); the abrupt first appearance of one of the monsters crushing a car with its foot; the flying robotic creatures that invade the underground parking lot.

The Strause Brothers’ marshalling of the effects in these scenes is enthralling and absolutely expert. They create an intriguing and unusual menace. The film holds a great sense of building mystery – for one, it is never made clear if the ships are alien or not. Maybe we could have done without the scenes where staring into the lights starts turning people into what would seem to be zombies as the zombie film has been feeling worked out of late. The film keeps the characters inside the apartment and tightly builds the drama through the debate over their best means of survival.

However, the great disappointment about Skyline is that we never do get to know what is going on. What are the aliens? Why are they here? Why are they snatching bodies? Why does looking into the light turn people into zombies? We can vaguely surmise some answers at the end – something to do with requiring pregnant woman for purposes unknown and needing human brains to house in their machines – but explanations are more a matter of guesswork than anything that is clearly presented. What this makes for is an alien invasion film that has been designed almost exclusively in terms of its special effects set-pieces and little more beyond that. (No surprise perhaps given that most of the principal creative talents behind the film, including the directors, writers and producers are special effects people).

This becomes even more frustrating when it comes to the end of the film where [PLOT SPOILERS] both Eric Balfour and Scottie Thompson are snatched up into the alien ship, she scanned for her pregnancy and then encounters him placed inside one of the machine bodies in a scene that reminds a good deal of the meeting between Galyn Görg and her former boyfriend in Robocop 2 (1990). The film ends abruptly there, leaving everything hanging on a point of frustrating irresolution. Maybe the intended effect was one of a jolt twist ending but the lack of story resolve is infuriating. All that seems to be missing is a ‘To Be Continued’ title card before the end credits roll.

This focus on the effects and lack of interest in the traditional expectations of a plot also produce a number of problems elsewhere. The characters are badly under-characterised. They are cast with largely unknown faces – the biggest name in the cast is Eric Balfour who I have always maintained was an actor worthy of a higher profile, he having floated around various tv roles and supporting parts in films without finding a breakout role before now. This does have some effect when members of the cast start being bumped off and the victimology does not follow expected patterns. On the other hand, the characters are little more than first names. We never find out what it is that Donald Faison has done to become a success, nor anything about the big issue for which he wants Eric Balfour to move to Los Angeles. In the introductory scenes, the people seem more denoted by their lifestyle of conspicuous consumption than they do their personalities – fast cars, an apartment filled with technological gadgets, bottles of alcohol all around, hot-looking women at the pool and so on. (The fact that Skyline is executive produced by notorious Hollywood party boy Brett Ratner may well explain something about this).

This has a downside when the drama kicks in as these largely blank characters give little resonance to it. An alien invasion film – or any type of large-scale disaster film – usually deals with this by creating drama either where the heroes of the show are racing to find a means to combat the resident menace or are trying to escape from it. At most, Skyline seems to weakly fall into the latter but most of this transpires as a debate for and against whether the party should leave the apartment with no clear decision ever made one way or another. In many respects, Skyline reminds of Cloverfield (2008), another similar movie about a twentysomething cast trying to survive in an urban area with giant monsters on the rampage, which saw its menace as an overwhelming one and arrived at a downbeat ending. The same lack of connection between the menace and the human characters exists here. You half expected the film to have them finding a means of fighting back in the end scenes, or else to allow the lovers to get away to safety. Neither happens and as a result Skyline is a film essentially lacking in dramatic drive. For the characters, it merely amounts to a pessimistic surrender to their too becoming bodies eventually sucked up into the light.

The Brothers Strause next produced Take Shelter (2011) about a man who has possible visions of a vast looming disaster,d the ecological catastrophe film The Bay (2012) and the cloning film Elizabeth Harvest (2018).

(Winner for Best Special Effects at this site’s Best of 2010 Awards).