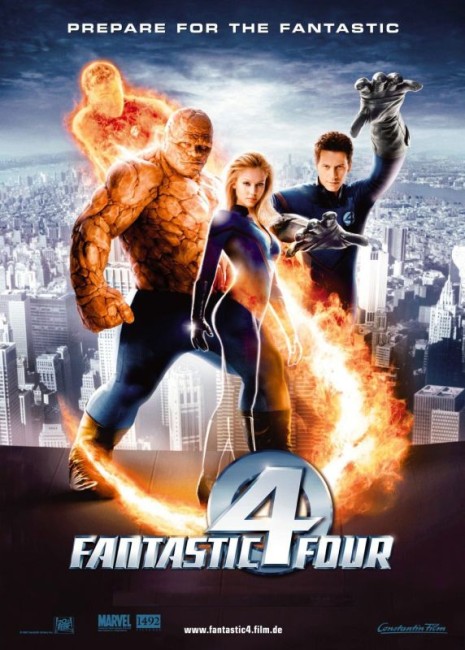 Scientist Reed Richards asks his old university roommate Victor Von Doom, now a billionaire industrialist, for funding to launch a mission to Von Doom’s space station to study the effects of a cosmic storm. Von Doom agrees but asks Reed to sign away 75% of the proceeds in return. The expedition launches with Reed, Von Doom, Von Doom’s chief geneticist Susan Storm (Reed’s old flame who is now wooed by Von Doom), her hotshot brother Johnny as pilot, and Reed’s friend Ben Grimm. Once on the station, they discover that the storm is accelerating. Von Doom cold-bloodedly prepares to bring the shields down and abandon Ben outside the station. The others race to his rescue but are hit by a full blast of radiation. Back on Earth, they discover that the radiation has left them with strange abilities – Reed finds that he can stretch and contort his body like elastic; Susan can become invisible and project a forcefield; Johnny has the ability to burst into flames and generate heat equal to the temperature of the sun; while Ben develops a massive rock-like orange outer skin. They gain media attention after using their abilities to save people at a crash on a bridge and are nicknamed The Fantastic Four. Meanwhile, due to the disaster on the station, Von Doom is fired as CEO of his own company. He finds that he too is starting to mutate, developing a skin of metal and the ability to control electrical energy. Seething with revenge, Von Doom seeks to find a means of destroying The Fantastic Four.

The Fantastic Four have not exactly had a very successful screen career prior to this. There was a cartoon series The Fantastic Four (1967) produced by Hanna-Barbera, which only lasted for 20 episodes. Johnny Storm/The Human Torch was originally announced as a stand-alone character in his own tv series as part of the slate of Marvel tv adaptations made during the 1970s – along with The Amazing Spider-Man (1977-8), The Incredible Hulk (1977-81), Dr. Strange (1978) – but was nixed because of the cost of the visual effects and when some tv executive decided that this might inspire kids to set fire to themselves and jump off buildings.

The Four were next incarnated as an animated tv series The Fantastic Four (1978) from DePatrie-Freling, where Johnny Storm was ignominiously replaced by a new character Herbie the Robot (who was briefly incorporated into the comic-book). Around the same time, Hanna-Barbera produced their own version of The Thing (1978), where Ben Grimm became a teenager who merely transformed into The Thing whenever he put on a special ring. The Fantastic Four also appeared more successfully, along with various other Marvel characters, in a further animated series The Fantastic Four (1994-6).

There was considerable interest in the Fantastic Four as a film property during the 1990s. The rights fell into the hands of B-budget producer Roger Corman, who also owned Spider-Man around the same time. Along with Germany’s Constantin Film, Corman produced a movie The Fantastic Four (1994), directed by Oley Sassone and featuring Alex Hyde-White as Reed Richards, Jay Underwood as Johnny Storm, Rebecca Staab as Susan Storm and Michael Bailey Smith as Ben Grimm. The film has a bizarre legend to it in that it was purportedly made with the intention that it never be released. It appears that around this time the rights to The Fantastic Four were also sought by Chris Columbus, the director of Home Alone (1990), Bicentennial Man (1999) and Harry Potter and the Sorcerer’s Stone (2001), who wanted to make his own big-budget adaptation. Constantin Film’s option on the rights was due to expire unless a film was made. Making a film meant that the rights would vastly increase in value. Constantin realised that they needed to make their film quickly before the rights expired and so turned to low-budget producer Roger Corman and expended only a miserly $2 million budget. The cast and crew were reported to not know that the film was made with the intention of never being released. However, this version survives in bootleg versions and is not entirely as bad as its reputation has it. An entire documentary Doomed: The Untold Story of Roger Corman’s The Fantastic Four (2015) was made in an attempt to get to the bottom of what happened.

Chris Columbus stays on as executive producer here but one is glad that he did not end up directing – one suspects, going by the banality of his films, which substitute mindless effects for anything of dramatic substance, that he would have made an insipid adaptation. Some of the other names that were once announced to direct this version – from Raja Gosnell of Scooby-Doo (2002) fame and actor Sean Astin – did not exactly inspire either. Nor did the director finally assigned to this version, Tim Story, whose previous films, Barbershop (2002) and Taxi (2004), failed to get one enthused about anything. On the plus side, the film did boast a script written by Mark Frost, a writer on tv’s Hill Street Blues (1981-7) and the co-creator of the cult tv series Twin Peaks (1990-1).

Despite all indications to the contrary, Fantastic Four emerges as a far better film than it might have done. It is extremely faithful to the comic-books. Mark Frost and co-writer Michael France shift the Victor Von Doom origin story around a little (most notably in placing him in the path of the cosmic storm along with the Four) but the characters all look as though they have stepped out of the comics panel and come to life. There are all manner of trivia details from the strip – the suits made of unstable molecules, the Baxter Building, Victor Von Doom’s rulership of Latveria, The Thing gets to roar “It’s clobberin’ time” and Johnny say “Flame on,” while Stan Lee himself turns up in a cameo as the Four’s mailman Willy Lumpkin.

Frost and France’s script gives depth to the characters. We get a sense of their distinctiveness as individuals – the geeky Reed Richards unable to see the romance in front of his face, the doleful alienated Ben Grimm, the cocky hotshot Johnny Storm. France and Frost introduce the characters at odds and conflicting – just as they often are in the comic-book – and part of the pleasure of the film is in seeing the way these aspects come together and the four unite as The Four. Certainly, Fantastic Four is not a film that echoes with the psychological drive and complexity or the mythological resonance of say DC’s Batman Begins (2005), which opened only three weeks before, but then the original comic never had that depth either.

The film is well cast with Welsh actor Ioan Gruffudd making a wonderfully handsome Reed Richards, Chris Evans (a few years before going on to greater fame in the more famous Marvel comic-book role of Captain America) projecting equal amounts of cocky arrogance and enormous charm as Johnny Storm, and Michael Chiklis’s marvellously expressive Ben Grimm being the sympathetic scene-stealer of the show. Only Jessica Alba seems colourless as Invisible Girl. Julian McMahon, the hot new flavour of the moment imported from Nip/Tuck (2003-10), this author’s current favourite tv show, glowers with handsome menace but does little more. Mindedly, Von Doom is fairly one-dimensional as a character – after all, how more obvious a villain can you get than having a name like Victor Von Doom?

Tim Story sets up some exhilarating superhero sequences – the Four on a bridge rescuing a toppling fire truck; Johnny Storm taking to the skies in full flame to deflect a heat-seeking missile; and the climactic battle in the streets that is somewhat reminiscent of Superman II (1980) with the Fantastic Four using their powers in unison to defeat Von Doom. The script is a little thin on the ground. At one point, it incredulously has Johnny Storm generate a temperature of 4000 degrees Kelvin – which is said to be the temperature of the sun (the actual figure is around 15.71 million Kelvin) – yet fail to even melt the titanium box he is sitting in. Fantastic Four may not rank as one of the comic-book to screen masterpieces, but everything that it sets out to do – bring the characters to life, give them three-dimensional depth, create some exciting screen superheroics – it does satisfyingly.