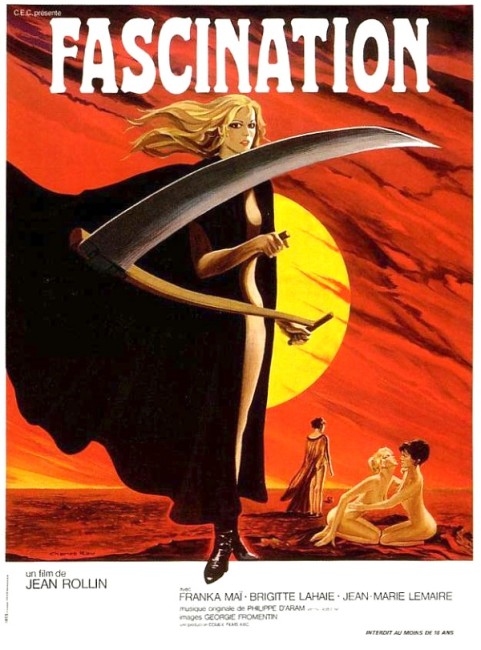 1904. Mark and his comrades have stolen a bag of gold coins but Mark double-crosses the others and flees with the coins. As the others pursue trying to kill him, Mark seeks refuge at a chateau. There two women, lesbian lovers Elisabeth and Eva, welcome Mark in and seduce him. Mark’s pursuers gather outside. Eva goes out, offering to return the coins. Instead, she slaughters all of them with a scythe. The two women use their wiles to persuade Mark to stay until midnight where they and several other women are going to engage in a ceremony that promises “death and Satan”.

Jean Rollin’s films are a strange mixture of artiness and horror. His earlier films in particular are works of artily surreal effect, although his later work becomes much more traditional in matters such as plot. Rollin has also delved into the erotic/pornographic genre with works such as Fly Me the French Way (1974), Hard Penetration (1977), Sexual Vibrations (1977) and Sodomanie (1983), almost as much as he has horror. Frequently, horror and erotica blend into one in Rollin’s work. Fascination is one such case – the film, for example, is available around the world in various hard and soft cuts. The version seen here, which hails in at a brief 70 minutes, gives strong impression that much has been cut out – other versions of the film are listed as being 80 minutes.

Jean Rollin’s earlier films were vampire films with a touch of erotica. Fascination falls into the mini-genre of lesbian vampire films that emerged during the 1970s, including the likes of Hammer’s The Vampire Lovers (1970) and sequels, Vampyros Lesbos (1970), Daughters of Darkness (1971), The Velvet Vampire (1971), The Blood Spattered Bride (1972), Lemora: A Child’s Tale of the Supernatural (1973) and Vampyres (1974). (In many other ways, Rollin dispenses with the traditional iconography of the vampire movie. Indeed, Fascination could be a lesbian vampire film that throws out all supernatural elements and models itself on the more mundane blood-drinking fetish of Countess Bathory).

The horror is contrasted with gauzy, dreamily photographed scenes of the two female leads tumbling together. In between the softcore element, Rollin throws in some striking images. The film captivates from the first scene where we are focused on a woman in medium wide angle, perfectly attired in Victorian dress but standing in the middle of a charnel house, where she is joined by a husband who brings his wife, making her drink the animal blood (as a cure for anaemia), while one of the other women then stands licking her finger in lascivious closeup.

However, it is the shock images of the film that stay with one – in particular, the striking image of Brigitte Lahaie in a black hooded gown, naked underneath, stabbing a man in the stables after having sex with him and then beheading a woman with a scythe as she crosses the causeway to the chateau. Lahaie, who is better known as an actress in various erotic/pornographic films, including many made by Rollin, has a beautifully mysterious presence in the film.