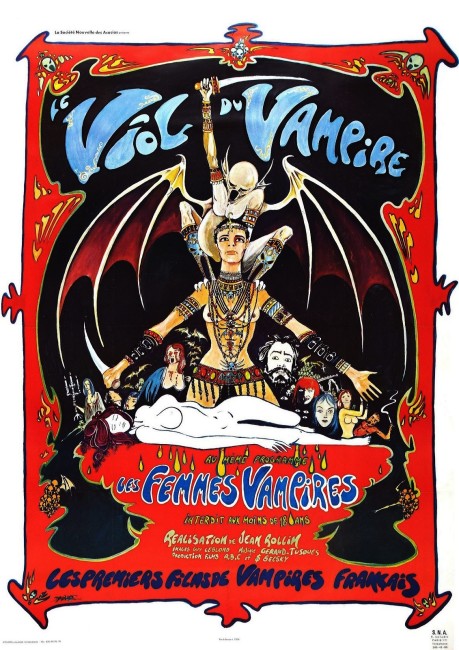 The Rape of the Vampire:- Three experts arrive at a rundown chateau to deal with the four sisters who live there. The sisters believe they are vampires but the experts are equally certain they are not and proceed to try and convince them using a number of methods. They soon come to discover that the sisters are in fact real vampires. The Vampire Women:- The vampire queen and her cohorts arrive at the chateau. Meanwhile, a doctor at a nearby clinic is certain that he has found a means to cure the vampirism.

The Rape of the Vampire was Jean Rollin’s first film. At the time, he was thirty years old and determined to become a director. He had been working as an assistant director and making short films on various subjects since the late 1950s. The Rape of the Vampire came after an arthouse theatre offered Rollin money to make a short film on the subject of vampires. Rollin went away and shot the film in and around an abandoned chateau in Paris. He was unable to afford actors on the budget he had and so the roles were filled with strippers and local non-professionals. These scenes comprise the first part of the film entitled The Rape of the Vampire, which lasts for 31 minutes.

It was then decided to expand the film to feature length and so Rollin was given some money to shoot more material to pad the film out. Thee scenes comprise the second half of the film The Vampire Women, also known as The Queen of the Vampires, which run for 59 minutes. Rollin claims to have lost his script and essentially made up these sections of the film. This may well be why people regard the film as incoherent – things such as characters who are killed in part one are alive again in the second half, different actors play characters with the same name and so on. Reportedly when the film premiered, audiences were so irritated with it that they pelted the screen. The film premiered during May of 1968, a turbulent period in which all of France had been brought to a standstill by strikes and civil unrest.

Part of you balks at reviewing a softcore erotic film entitled The Rape of the Vampire (the literal translation of the French title – in the US it was retitled Vampire Women), particularly in this era of Woke sensitivities and post-Women in Refrigerators and the assertion that rape should not be regarded as a topic for dramatic purposes. In defence of Rollin, the film does not depict any actual rapes – it is merely something that happened to one of the characters in the past and is offered as explanation for why she became a vampire. Furthermore, the film was made in 1968 when such sensitivities were not in the public consciousness. I am not a fan of erasing works from consideration just because of current moral mores (or that the personal lives of their makers do not meet contemporary standards).

The Rape of the Vampire is an early treatment of the ideas that Rollin would develop in his subsequent vampire films. It features all the trademarks of these other films – vampires, much in the way of softcore nudity from the vampire women, assorted happenings around a decaying building, strikingly arty and eroticised poses. Crucially, none of the proceedings have much in the way of a plot (as was also the case with Rollin’s other vampire films) and often seem a series of artily surrealistic images strung together. If anything, what we have is less a vampire film and more of a student art film.

There may have been incoherence forced on the film by Rollin’s method of shooting and a lost script but in truth the problems are wider than this. None of what happens makes a whole lot of sense. There are certain plots that drive the two films – the arrival of the group to convince the women they are not vampires, the arrival of the vampire queen for purposes unclear, the doctors who offer a cure for vampirism – but these seem like scenes that Rollin only occasionally remembers to get back to and never develops much. The best of these is probably the arc about the rationalists who realise the women they are trying to cure actually are vampires after all.