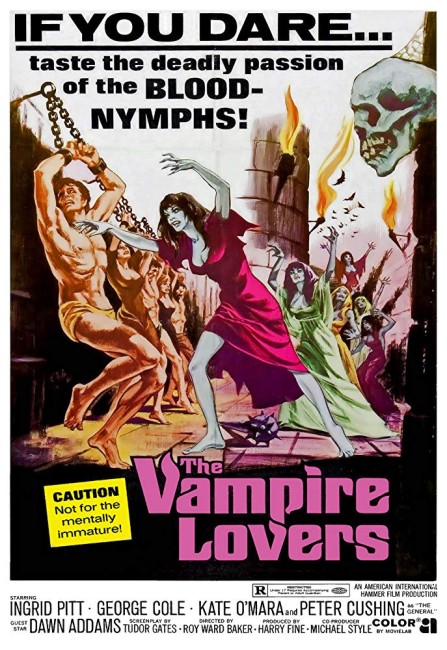 A countess and her daughter Marcilla attend a ball held by General Spielsdorf. When the countess is called away by the death of a friend, the General chivalrously agrees to allow Marcilla to stay. Soon after, the General’s daughter Laura starts waking at night, claiming a big cat is in her room. She grows weak and dies in a matter of days from vampire bites at her neck. Marcilla vanishes and is next encountered by wealthy Britisher Roger Morton with a crashed carriage in the woods, now calling herself Carmilla. Carmilla quickly moves in on and seduces Morton’s innocent teenage daughter Emma and her language tutor.

The Vampire Lovers was a Hammer film. It was made at a point during the studio’s history when the old guard was passing away in favour of new management. Unfortunately, the new management had far more commercial prospects in mind and quickly began to milk Hammer’s staples for as much as they could – notably turning out one Dracula film a year and reviving Frankenstein – The Horror of Frankenstein (1970), Frankenstein and the Monster from Hell (1974); Dr Jekyll – Dr Jekyll and Sister Hyde (1971); and creating a spate of new vampire films where the emphasis was now on the sexual element. Spearheading this new sex vampire trend, breaking the bonds of repression that the original Hammer Dracula films represented, was their Karnstein trilogy, which began with The Vampire Lovers and continued on through the puerile Lust for a Vampire (1971) and the reasonable Twins of Evil (1971).

On purely a plot level, The Vampire Lovers is a reasonably faithful reading of J. Sheridan Le Fanu’s Carmilla (1872) – albeit padded in the middle with scenes of Carmilla/Marcilla seducing the Morton household – something the other two Hammer Karnstein films could make scanty claim to. Unfortunately, the crude and obvious direction of the film’s appeal – to the sexual element (the film’s poster has the tagline “Taste the deadly passion of the blood-nymphs”) – considerably obviates any of the atmosphere of the story. Sheridan Le Fanu’s original story was something delicate and subtle, where both sexuality and the deeper hideousness of vampirism lurked beneath a girlish naivete.

By contrast, The Vampire Lovers puts everything upfront. It is rife with heaving bosoms in lowcut necklines and push-up bodices. When the sexuality does get out of the bag, it comes with the giggly self-consciousness of an adolescent masturbatory fantasy. A scene with Ingrid Pitt chasing Madeleine Smith around and onto the bed with both unclothed is, when one considers that this is supposed to be a serious vampire attack, rather embarrassing.

Director Roy Ward Baker does have his one moment of pure Hammer Gothic – the opening scene where Douglas Wilmer stands in a ruined abbey as a hooded figure slowly drifts through the mist, dropping its hood to reveal itself as a woman who tries to sink her teeth into his neck, only to have him decapitate her with a sword.

The Vampire Lovers makes for interesting comparison to Hammer’s original Dracula/The Horror of Dracula (1958). The plot followed by the two films is not dissimilar and there are other similarities such as the team of four vampire hunters led by Peter Cushing (although Cushing’s role in The Vampire Lovers is, despite his top-billing, a secondary one). The major change is in the attitude toward the vampire – Christopher Lee in Dracula was out-and-out animal evil; in The Vampire Lovers, sympathy has changed onto the side of the vampire. Her vampirism is seen more as a girlish lesbian affectation than a need to plunder people for their blood, while the film treats Carmilla’s desire to take Madeleine Smith away and live forever with her with surprising sympathy. In contrast, the vampire hunters are the usual bunch of cutting sword rationalist/religionists. In a dilemma that increased in the subsequent Carmilla films, the film’s sympathies are divided as to whether they lie with the vampire’s nascent sexuality or with the traditional forces of repression.

Ingrid Pitt gives a performance of unusual sympathy. There is one well written scene where she describes her fear of getting old. Ingrid Pitt’s thick native Polish accent suggests an effective alienness but at the same time she lacks a finesse with the emotional subtleties the part requires, resulting in a breathily melodramatic reading of the role – she seems perpetually on the verge of swooning. If anything, she suggests a female Bela Lugosi – thick-accented menace and doing all her acting by the dilation of her eyes.