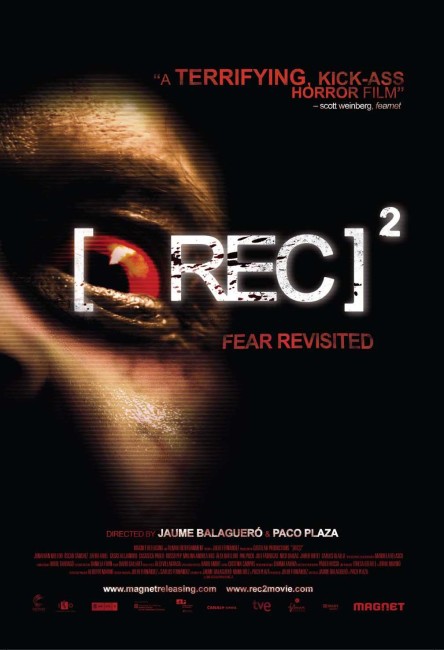 A team of armed soldiers is sent into the Barcelona apartment that has been quarantined because of infection. Placed in charge of the team is Dr Owen who the soldiers are told is from the Ministry of Health. They soon encounter the zombies. During the course of dealing with them, it is revealed that Owen is not a scientist but a Catholic priest. He attempts to explain to the others how the possessed Nina Medeiros was held in the apartment in an effort to determine the scientific cause of her possession. Owen will not permit them to leave until he finds a vial of Nina’s blood, even as the zombies start slaughtering the party. Meanwhile, three youths fooling around with a video camera have also snuck into the apartment building via the sewers and now become caught up in the outbreak.

[Rec] (2007), from two of the top Spanish genre directors, Jaume Balaguero and Paco Plaza, was a more than reasonable international hit. It offered the novelty of a zombie outbreak film that took place entirely in an apartment block. The unique thing about [Rec] was that Balaguero and Plaza shot the entire film using a handheld video camera. (This was before the Found Footage approach became copied by everybody everywhere after Paranormal Activity (2007) proved to be an enormous box-office success).

[Rec] proved enough of a success that it was quickly remade by Hollywood as Quarantine (2008) within a year of it coming out. This is a sequel and Balaguero and Plaza went onto each individually make two further films in the series with [Rec]3: Genesis (2012) and [Rec]4: Apocalypse (2014).

[Rec] 2 follows directly on from [Rec] – the two could be run together without a break. [Rec] was not a film that was burning for a sequel – it worked perfectly well as a self-contained unit. That said, [Rec] 2 does a fair to reasonable job of following directly on. The main problem is that the novelty of the approach and the twist ending have given away much of the effectiveness a second time around.

To its credit, [Rec] 2 does more of a job of exploring the nature and background of the possession, which was always one of the aspects that I thought did not work in the original – trying to give a supernatural/spiritual issue a physical explanation. There is a particularly good intro where the soldiers head in and encounter the zombies before the character that we thought was the health ministry official (Jonathan Mellor) suddenly produces a crucifix and starts praying, which has the effect of halting the zombie in its tracks.

There are various scenes similar to what we had last time with people prowling around in the dark and/or sickly green infra-red light and zombies popping out to attack. Much of this is the same as in the first film, although there are some unnerving scenes as people head up into crawlspaces and zombies start rapidly advancing towards them by torchlight and the like. There is one way-out scene where a zombie woman gets a rocket in her face and staggers crazedly down a hallway with her head lit up. The film also manages a good surprise at its end that plays on the shock abrupt ending of the original.

[Rec] 2 is also weaker than the first film, in large part due to the watering down the cleanness of the first film’s approach. The single camera viewpoint is often broken up by footage from cameras mounted into the soldiers’ headgear. Here we see numerous point-of-view shots with soldiers running around holding guns up in front of the camera, exactly as though we were in the midst of a first-person-shooter game like Doom. This does lead to one accomplished scene seen reflected in a mirror as an infected soldier hides in a bathroom and we see him blow his own head off rather than succumb.

For some reason, Balaguero and Plaza now improbably have two different crews with cameras inside the house simultaneously with the middle of the film doing a flip to show everything that has been happening from the point-of-view of the second group. This break-up of the cameras and double narrative disrupts the clean neatness that the original held with its single camera mockumentary style. The splitting of the story and the doubling back to tell things from a different perspective is odd – like some of the elliptical dramas and simultaneous interwoven storylines of a film like Go (1999). It feels more like it is there because the film’s A story did not have enough to it to sustain the running time.