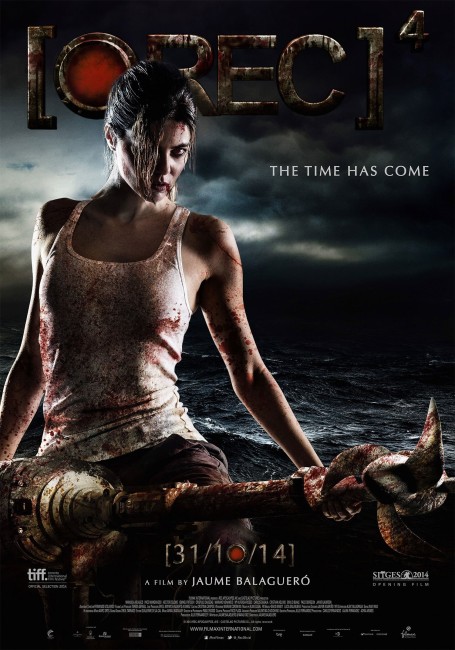 The epidemiologist Guzman is sent into the infected apartment block in Barcelona. He manages to rescue tv presenter Angela Vidal, the only survivor of the outbreak, moments before the building is blown up. They both come around under quarantine aboard a ship at sea where they are being studied by scientists to make sure they are clear of infection. Guzman discovers that his colleague Lucas secretly obtained a vial of infected blood with which the scientists are hoping to create a cure. However, the virus gets loose and begins rapidly infecting soldiers and the crew of the ship. As the others fight for their lives, the scientists come after Angela, believing that she is carrying the parasitic organism that started the infection.

The Spanish-made [Rec] (2007) was one of the best of the modern spate of Found Footage films. It predated the massive success of Paranormal Activity (2007) and its worldwide explosion of the Found Footage genre in 2009. The success of [Rec] saw an English-language remake with Quarantine (2008), which spawned a sequel Quarantine 2: Terminal (2011). Back in Spain, co-directors Jaume Balaguero and Paco Plaza returned with [Rec] 2 (2009), while both then made individual sequels, Plaza with [Rec]3: Genesis (2012) and Balaguero returning to complete the series with [Rec]4: Apocalypse here.

This follows closely on in continuity from the other films, with the senile Ma Alfonso Rosso being one of the guests from the wedding so as to wind in connection to [Rec]3. This film also brings back Manuela Velasco, the news-presenter heroine from the first film, who is now looking quite a bit older despite the fact that in terms of the series’ internal continuity this is only supposed to be taking place a day or so after the event in the apartment building. Later in the show, Balaguero strips her down to a singlet to go into action, although Velasco is a much quieter personality and is unable to carry the strong kickass heroine role the way Leticia Dolera did with chainsaw in [Rec]3.

The disappointment about [Rec]4 is that without the Found Footage approach, it now becomes just another zombie film. (This also downplays the demonic possession angle with the revelation that the infection is caused by a parasite rather than supernatural forces, which seems to contradict [Rec]3 where we saw the zombies being halted by the recitation of Bible verses).

The film falls into predictable areas in the plotting department – with obvious dramatic tensions like the coming storm and the power cuts, which you just know are going to kick in at crucial moments as the zombies are attacking. The film certainly features some extremely detailed and gorily convincing zombie makeups. On a story level though, this is nothing too much beyond the idea of an outbreak aboard a ship and you feel that there is little here that adds to the [Rec] series overall.

That said, despite a relatively unexceptional middle, Jaume Balaguero finally finds the film’s stride in the last third and delivers an entertainingly gory bloodbath with survivors taking on the infected, including wading in against them with an outboard motor at one point. The film builds to a more than reasonably effective climax during the scenes with the survivors being driven to the very prow of the ship by the zombies during the midst of a storm and then forced overboard.