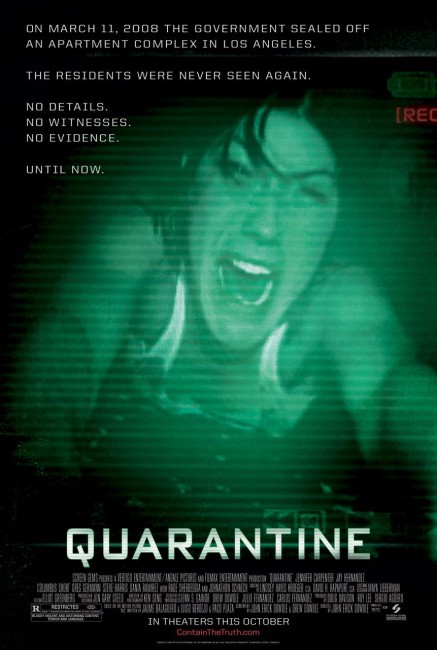 Angela Vidal, a reporter for the tv show ‘Night Shift’, goes to spend an evening with the Los Angeles Fire Department as part of a story. She and her cameraman join fire-fighters Jake and George as they are called to an emergency at an apartment building. As they enter an apartment to help Mrs Espinoza, the elderly woman turns, frothing at the mouth and tears out a police officer’s throat. They try to get the injured man out but suddenly authorities from the CDC arrive and close the entire building off, declaring it a quarantine zone. The people trapped inside the building then find that those who have received bites from the infected start returning as rabid zombies.

In recent years, producer Roy Lee and his Vertigo Entertainment company have had enormous success buying up the rights to Asian horror films and remaking them for English-language audiences. This has resulted in efforts such as The Grudge (2004), Dark Water (2005), The Lake House (2006), The Echo (2008), The Eye (2008), Shutter (2008) and The Uninvited (2009), even Martin Scorsese’s The Departed (2006). With Quarantine, it appears that Vertigo Entertainment are expanding their interest out beyond the Asian pool and remaking films from other parts of the world too (which is possibly indicative of how much the Asian horror market has become strip-mined by these remakes).

The original in question here was the Spanish-made [Rec] (2007) from directors Jaume Balaguero and Paco Plaza. The novelty about [Rec] was that it was a zombie film shot Found Footage style, not dissimilar to George A. Romero’s Diary of the Dead (2007), which came out at the same time. Balaguero and Plaza shot the film in handheld digital on the pretext of it being filmed by a tv crew following firemen around an apartment building as it became overrun by the possessed dead. The result became a modest hit with international audiences. Balaguero and Plaza went onto make a sequel [Rec] 2 (2009), followed by [Rec]3: Genesis (2012) from Plaza on his own and [Rec]4: Apocalypse (2014) from Jaume Balaguero.

Quarantine was the English-language remake of [Rec]. Vertigo handed Quarantine over to John Erick Dowdle, who co-writes with his brother Drew. The Dowdles had previously made two not very widely seen indie comedies with Full Moon Rising (1996) and The Dry Spell (2005). What almost certainly had John Erick Dowdle selected to handle Quarantine was his previous film The Poughkeepsie Tapes (2007), which was likewise in a Found Footage format concerning dozens of videotapes left by a serial killer. Subsequent to Quarantine, Drew and John Erick Dowdle went onto make the M. Night Shyamalan produced The Night Chronicles 1: Devil (2010), a further Found Footage horror film As Above So Below (2014), the non-genre action film No Escape (2015) and created/produced/directed the tv mini-series Waco (2018).

I went into Quarantine with low expectations as, with the exception of The Departed, not a single one of Vertigo’s English-language remakes had been able to hold a candle up to the originals they are taken from. Thus it is a surprise how well that Quarantine emerges from the pit of no expectations. First of all, the Dowdle brothers conduct it with an exacting respect for the original. They follow [Rec] in enormous detail, right down to replicating many of the names of the original characters and the designs for some parts of the apartment building. At the same time, John Erick Dowdle makes Quarantine distinctively his own film. There is not the sense that he is following someone else’s shot set-ups, rather that he is inventing the scenes anew and determining to imprint his own stamp.

The result is a film that emerges with a high degree of eerie suspense and gutsy payoff – even more so considering that one had only seen [Rec] six months earlier in the year and knew where all the shocks were coming. John Erick Dowdle does an especially good job of drawing out the tense night light-shot scenes in the attic and replicating the unforgettable final jolt the film goes out on. The remake also inserts a barrage of much gorier and more detailed makeup effects than the original had – notably one scene where we see infected fireman Johnathon Schaech walking with a broken leg with the bone protruding, and various scenes with the gored bodies lying on the workshop table.

The Dowdles make a number of changes to the original. There is more time spent horsing around with the firefighters at the start. One of the more noticeable changes is that the ragged digital-shot look of the original has been replaced by standard 35mm cameras, which tends to weaken the shot-on-video mockumentary look that we are supposed to be seeing (although this at least leaves one with less of a vertigo-induced migraine as the original did). To his credit, John Erick Dowdle engages in a good deal of shakycam once he gets into the thick of the action. There is one gimmicky shot where we see the video camera (still on) being used to repeatedly beat in the head of an infectee.

The biggest change comes in the explanation of what has caused the outbreak. [PLOT SPOILERS]. In [Rec], there was the incredulous explanation that a priest had imprisoned a possessed teenage girl in the attic and that the evil had leaked to the other apartments and caused the rest of the tenants to become infected zombies. The Dowdles throw this explanation out and substitute one about a doomsday cult having stolen a deadly virus and been conducting experiments with it in the attic. This explanation makes far more sense than the one offered in [Rec]. It is also one where the Dowdles stitch up some of the plot holes in the original – like how the authorities would know to quarantine the whole building without the infection having spread out of the old woman’s apartment by the time the camera crew arrive. (Here the explanation is that the infected dog was taken to the vet who picked up on the outbreak, alerting authorities).

Quarantine headlines the increasingly underrated Jennifer Carpenter. I first noticed Carpenter in the title role of The Exorcism of Emily Rose (2005), which did not impress much as a film, but began to pay attention to her as the sister in tv’s Dexter (2006-13) where she etched out a strong character and showed a natural screen charisma. The role here could easily have emerged as standard B movie starlet material but Carpenter stamps it with her own natural tomboyish warmth. Opposite her is Jay Hernandez, previously the lead in Hostel (2005), who does the remarkable job of managing to look even younger here than he did there.

A sequel was made with Quarantine 2: Terminal (2011), which sets the action aboard a plane.