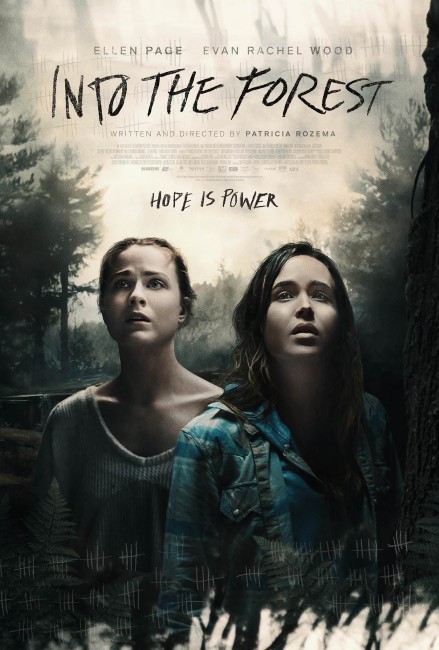 Robert is living at his cabin home in the remote woods with his two daughters Eva and Nell when the power abruptly goes out. They try to make do with what they have. After a venture into town to replenish supplies, they find that the power cut has struck across the entire country. Robert is then killed in an accident cutting down a tree. This leaves the two girls on their own. As the blackout extends into months, they determine to make the best of the supplies they have. They conflict over Eva wanting to use some of the limited supply of fuel to power the generator so that she can have music to dance with versus Nell who insists they conserve it for what is needed. They are joined by Nell’s boyfriend Eli who urges her to travel across country to Boston where there are rumours of things having been started up again but Nell realises she cannot abandon Eva. Eva is then raped by a local guy. Trying to cope in the aftermath of this, Eva discovers that she is pregnant.

Patricia Rozema is a Canadian director who gained quite reasonable international attention with women-centric films such as I’ve Heard the Mermaids Singing (1987) and When Night is Falling (1995). She had reasonable mainstream attention with her adaptation of Jane Austen’s Mansfield Park (1999) but for the last decade appears to have largely languished in television. The film is adapted from Into the Forest (1996), the first novel of US author Jean Hegland. With Into the Forest – not to be confused with the recent musical Into the Woods (2014) – Patricia Rozema makes her first venture into genre cinema.

There have been numerous stories about the collapse of civilisation before. We have had the theme of the catastrophic worldwide power cut before (all we learn in the film is that the disaster affects the continental US, although you would have to presume that it would be worldwide otherwise other countries would surely rush to the rescue to restore law and order rather than let things grind on for nearly two years). The catastrophic power cut has been imagined in a number of films, most notably The Trigger Effect (1996), the tv series Revolution (2012-4) and perhaps the closest that this comes to Goodbye World (2013), which concerned a group of divers people gathered at a cabin in the woods (although that seemed more interested in conflicting ideologies, as opposed to Into the Forest‘s focus on survivalism).

Patricia Rozema’s approach is low key. She largely avoids depiction of any widespread social apocalypse by keeping the story confined to a cabin in the woods – the only venture we get beyond that is a single visit to the nearby township. The rest of the world seems to exist only on the periphery, there when it is needed to dramatically drive the plot, while the story concentrates on the two sisters and their survivalism. Thus we are spared any of the sense of the world fallen into anarchy that we might get in another work of urban social collapse such as 28 Days Later (2002), Blindness (2008) or These Final Hours (2013).

The isolation allows Rozema to tell the story she is interested in telling without worrying too much about the wider picture – there is a total of only five characters in the film, for instance. Although part of you keeps wondering about the practicality of the scenario and the lack of details given about the catastrophe – for example, I can understand one power grid going down but what causes an entire countrywide (and crucially unconnected) grid to do down? Why is not possible to repair and turn the entire system back on? What happened to the military and emergency services?

Rozema does churn a few cliches – in particular, the magic Book of All Knowledge that provides the survivors with all the survival knowhow they need. For the most part though, Into the Forest is a strong and worthwhile survivalist drama. We get many of the little touches that make the film convincing in showing the world they are in – the need to use leafs when toilet paper runs out, trying to properly identify berries in the forest, the joy that Ellen Page discovers in finding a single chocolate hidden in the cupboard, the fight over whether they have the right to conserve the last of the fuel for personal use or not, and a particularly graphic and detailed scene that shows us how to kill, gut and cure a pig.

Being a women-driven film, the focuses in it are often women’s issues that would probably not even dent the awareness of a male-oriented version – worries about pregnancy in a world without contraception, while the climax of the film is one that celebrates the joys of childbirth. (The film does delete one taboo element from the book where the two sisters have sex with one another).

You do keep wondering about some of the practicalities – like how the two of them manage to survive for some eighteen months on just the few boxes of supplies that were loaded in the back of a pick-up truck or where they manage to store so many candles. The film is, going from the technology on display at the start, also set slightly in the future, although this seems to never serve any particular purpose other perhaps than reminding us that we are over-reliant on technology.

The other odd issue is the one the film climaxes on – [PLOT SPOILERS] – is the decision to burn the house down because it is filled with black mold and for them to walk off into the forest with just what they can carry on their backs. To me, this seemed an utterly suicidal decision. Not only are you destroying your shelter, all of your supplies and personal mementoes but are walking off into a world where EVERYTHING has collapsed – a world where most people who had not died in short course or else gone through the canned supplies that were left remaining – would be reduced to something akin to the survivors in The Road (2009). Not only that, it seems a move that makes no sense – a quick Google on the subject of black mold reveals that yes it is toxic to humans but an even quicker Google of the question “how to get rid of black mold?” reveals a number of solutions that would be well within the low-tech resources that the two girls have at hand.

Patricia Rozema is aided by a strong cast. Ellen Page takes the lead role (as well as a co-producing position) and gives a performance of strong internal strengths and vulnerabilities that stand among some of the best work she has done. Evan Rachel Wood stands up more than capably opposite her. The film also has Callum Keith Rennie, one of the most underrated and instantly likeable actors in Canada, who ends up exiting the show far too soon. There is also Michael Eklund, another Canadian actor who seems to have a workaholic regimen and has been appearing in just about everything in the last couple of years, who delivers about his 467th twitchy psycho role.

(Nominee for Best Actress (Ellen Page) at this site’s Best of 2015 Awards).