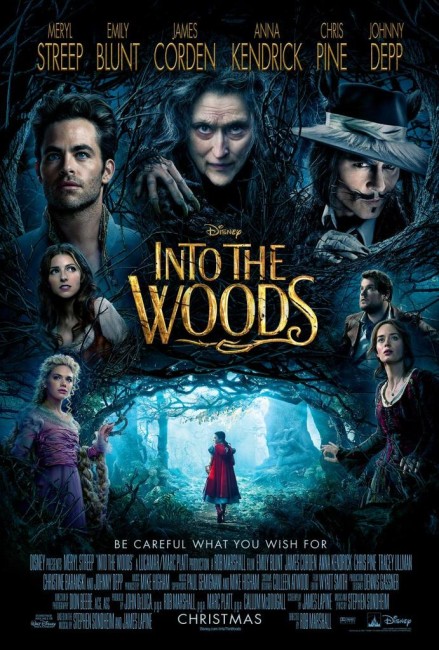 The witch living next door to a baker and his wife reveals that she placed a curse on them that prevents them from having children because his father stole magic beans from her garden. The only means to lift the curse is to obtain four things – a cape as red as blood, a slipper as pure as gold, a cow as white as milk and hair as yellow as corn. The baker and his wife set forth into the woods to find the items. At the same time, several others venture into the woods. These include Cinderella who is treated as a scullery maid by her stepmother and sisters. She goes to the tree she planted to her late mother where her mother’s spirit appears and gives her a dress and slippers of gold to attend the ball. There Cinderella finds herself the unwanted recipient of the attentions of a prince. Elsewhere, Little Red Riding Hood goes to deliver some baked goods to her grandmother but encounters a lascivious wolf. Meanwhile, young Jack is given the cow by his mother to go and sell – however, when the baker sees that the cow is milky white, he persuades Jack to trade it for some of the beans. When Jack’s mother angrily throws away the beans, they turn into a giant beanstalk reaching into the clouds and the kingdom of the giants.

Into the Woods (1986) was a musical from Stephen Sondheim. Sondheim is a celebrated musical writer and lyricist who has had major successes such as West Side Story (1957), Gypsy (1959), A Funny Thing Happened on the Way to the Forum (1962) and Sweeney Todd (1979) to his name. These have seen numerous screen adaptations of his works, most notably with West Side Story (1961) and Tim Burton’s Sweeney Todd: The Demon Barber of Fleet Street (2007). Sondheim has also written songs for various films, including the ones Madonna sings in Dick Tracy (1990). He has even authored several original scripts, including thirteen episodes of the tv series Topper (1953-5) and the thriller The Last of Sheila (1973). Into the Woods premiered in 1986 and then opened on Broadway in 1987 where it played for two years, featuring Bernadette Peters as the witch during the initial run. It won several awards and has been revived a number of times since.

Into the Woods has a long history as a film adaptation. It was originally announced back in the 1990s with creatures by the Jim Henson Workshop and to be directed by Penny Marshall and then Rob Minkoff, later of The Lion King (1994) fame. This never went ahead until it was revived by Rob Marshall. Marshall has a long career first as a choreographer of Broadway shows and then branching out into work on musical tv adaptations of Cinderella (1997) and Annie (1999). Marshall made a huge splash in his debut as director of the film version of the musical Chicago (2002), which had him nominated for a Best Director Academy Award. He went onto direct other films including Memoirs of a Geisha (2005), another musical Nine (2009), Pirates of the Caribbean: On Stranger Tides (2011), Mary Poppins Returns (2018) and the upcoming live-action remake of The Little Mermaid (2020).

There is probably a certain percentage of the audience that will go to see Into the Woods and come out raving about it and regarding it as an instant classic – I am not one of these. There is also more than likely to be another percentage of the audience that is going to be suckered into seeing Into the Woods because of the deceptive trailer, which majorly omits to mention the idea that the film is musical and thinking they are in for a dark and moody fairytale in the vein of recent films such as Red Riding Hood (2011), Mirror Mirror (2012), Snow White and the Huntsman (2012), Hansel & Gretel: Witch Hunters (2013), Maleficent (2014) and Cinderella (2015), and will come out hating it.

I am not a big fan of the musical genre, although I will admit to making some exceptions – The Rocky Horror Picture Show (1975) and Little Shop of Horrors (1986) come to mind. The problem here is that Rob Marshall, despite an eminent career in choreographing both musicals on stage and on film, never does much to make Into the Woods come to life as a film. The fairytale elements should burst with whimsy and magic; but instead what we have feels like a filmed pantomime. The sets are obvious – it never looks as though we are in a forest, simply a woods that has been recreated on a soundstage. The characters enter stage right or stage left, come to the centre of the shot and act surprised to see one another before bursting into a song – just the way a musical stages everything. On the other hand, Into the Woods fails by my standard of measuring a musical – do you come out singing lines from the tunes in your head or are there even any standout numbers? The ones here slip by so unmemorably that I doubt I could even remember enough to describe what a single song was about.

Even a not very good modern fairytale like Maleficent or Snow White and the Huntsman added something visual to the original fairytales that gave them a soaring cinematic flourish. However, this film’s faithful adherence to the musical book becomes a hindrance. Elements that should have been an essential part of the telling – like Cinderella at the ball, Jack’s ventures up the beanstalk – all happen off-screen because, though they are cinematic, they are the sort of lavish, effects-driven happenings that are unable to be easily replicated on stage. Yet, rather than open them up, the film keeps to the original scene breakdown.

Johnny Depp looks just like somebody in a sharp suit, as you would get in a play, rather than displays any wolf or werewolf-like characteristics if this were a film that had its feet more in the horror and fantasy genres. Moreover, while the appearance of the giant’s wife is a central aspect of the climactic scenes, we see her only by her presence or partial glimpse as opposed to any effects shots where we get a full view of her (again, something that would be impossible to replicate on stage but seems tailor-made for a film version).

Rob Marshall leaves Into the Woods as little more than a set of cutsie character interactions. There is no real plot to the film, just a series of familiar fairytales that all seem to be happening at the same time. The slim story that connects these wildly twists the originals out of shape in order to make everything work – the witch grows the magic beans in her garden; has kidnapped Rapunzel and made her a prisoner for no clear purpose; two charming princes both happen to wander through the same area of the woods at the same time; while the witch gives the baker and his wife the mission of obtaining the cape, the slipper, the cow and the hair not for any clear reason but because the film needs these entirely arbitrary reasons in order to happen.

The woods seems to change its nature depending on the dictates of the plot at any one moment – at one point, it casts a spell that allows Chris Pine to seduce Emily Blunt but it never does at any other point in the film; at other times the woods are enchanted, at others there to serve a vague metaphor about straying from the path. The film is full of tonal shifts between musical, seriousness, comedy and romance that seem to swap about from scene to scene. To its credit, the film does keep the scene where Cinderella’s stepsisters cut off their toes to fit the slipper, which is usually excised from modern family-friendly tellings of the fairytale.

So you figure, okay so this is not going for the reinvention of the fairytale as adult dark fantasy, what about the fairytale parody – is Into the Woods aiming to be something like Mirror Mirror? What we have here seems very similar to a few years ago where there was a spate of fairytale parodies such as the tv mini-series The 10th Kingdom (2000), Shrek (2001) and sequels, Hoodwinked! (2005) and Happily N’Ever After (2006), which all made a virtue of showing that everything was happening in a shared world. We have seen antecedents to this with the more recent likes of Grimm (2011-7) and Once Upon a Time (2011-8) featuring fairytale characters interacting in the modern world.

As such, there are occasional moments of cleverness – like Lilla Crawford as a lippy Red Riding Hood who gets the better of the wolf. I particularly liked the scene where Chris Pine is confronted about being a womaniser and responds with casual caddishness “I was raised to be charming, not sincere.” On the other hand, you never get the clear idea that Into the Woods is setting out to parody or deflate the fairytale in a big way. Compared to these others, there doesn’t feel much that it does that is astoundingly original or clever. Mostly though, it feels like the film that is weakly spoofing a genre where other works have explored all the possibilities inherent in the jokes over a decade ago.