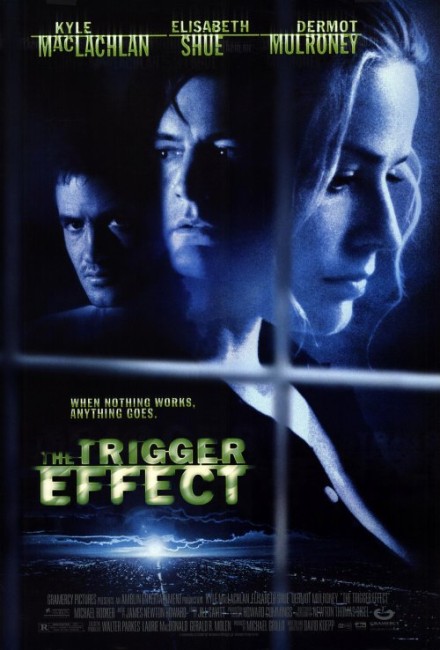 Matthew Kay and his wife Annie are asleep one night when there is a citywide power cut. The cut continues through the next day. Their baby daughter becomes ill but they have difficulty getting medicine for her as the pharmacy now insists on only accepting cash. An intruder breaks into their house and is shot by their neighbour Steph while fleeing. When they look at the body, they find the man was armed only with a knife – however by the time the police come Steph has replaced the knife with a gun. The neighbours talk about banding together for protection against the lawlessness and anarchy but Matthew walks out, seeing that their self-interest is tearing any idea of cooperation apart. He, Annie and their friend Joe decide to leave the city to go and stay in safety with Joe’s parents, but the journey there is disrupted by distrust of others and trigger-finger tensions.

Far better than any of David Koepp’s screenplays however have been the opportunities Koepp has had to direct his own material. He has only done so upon five occasions to date – beginning with The Trigger Effect and passing through the medium film Stir of Echoes (1999), the Stephen King adaptation Secret Window (2004), the comedy Ghost Town (2008), the non-genre thriller Premium Rush (2012), the comedy Mortdecai (2015) and the malevolent house film You Should Have Left (2020). At least the first three of these are excellent and underrated films. Alas they did only modest to – in the case of The Trigger Effect – little business at the box-office. It may well be that the very qualities that make a David Koepp film excellent – intelligence, subtle effect and a lack of over-the-top star power – is what has prevented him from having any blockbuster successes to date.

One didn’t know what to expect from The Trigger Effect and in seeing it it was a surprise to find what a good film it is. As the title suggests, it is a film about the prejudices and hotheadedness that comes to the fore when the veneer of civilization falls away. David Koepp conducts a potent examination of such a pressure-cooker situation. [He was purportedly inspired by The Monsters are Due on Maple Street (1960), an episode of the original The Twilight Zone (1959-64), where the inhabitants of a suburb are driven to paranoia and fear after an inexplicable powercut (caused by invading aliens)].

The Trigger Effect is strikingly well written. With the exception of a forced happy ending, the film is notable for David Koepp’s refusal to give into easy moralizing. If Koepp were to have cast someone like Arnold Schwarzenegger or Bruce Willis in the lead, the film would undoubtedly have been filled with gun-toting macho heroism as the star led the survivors to safety. Instead, The Trigger Effect turns every expectation that a standard action film might make inside out – a thief breaks into the house and is shot but turns out to have been unarmed; Kyle MacLachlan and Dermot Mulroney get scared and react thinking the worst when they see that Michael Rooker has a gun in his belt but after Mulroney is shot it turns out all Rooker wanted was a ride; a tense Mexican standoff between Kyle MacLachlan and Richard T. Jones is suddenly defused when his daughter walks into the room.

The Trigger Effect is a film about when the mentality behind the gun lobby and the belief in the constitutional right to self-protection goes disastrously out of control – the gun control lobby could surely not ask for a better endorsement. Koepp is scathing about the mentality of self-interest – there is one particularly potent scene where Kyle MacLachlan walks away in disgust from a neighbourhood group that talk about banding together but where none of them are prepared to use their cars as a blockade or share their generators. Koepp wants to make a plea for a greater understanding and cooperation between people in society – although his ending comes as slightly falsely because he sees the dramatic breakthrough in the film as two strangers coming to trust one another, with the restoration of civilization coming as fairly much an afterthought to this.

David Koepp does a particularly good job directing. The violence comes with shattering effect and scenes like the sudden appearance of the gun in the dead man’s hand or the standoff with Michael Rooker and the break-in to Richard T. Jones’s house are suspensefully handled. The cast all give fine performances.