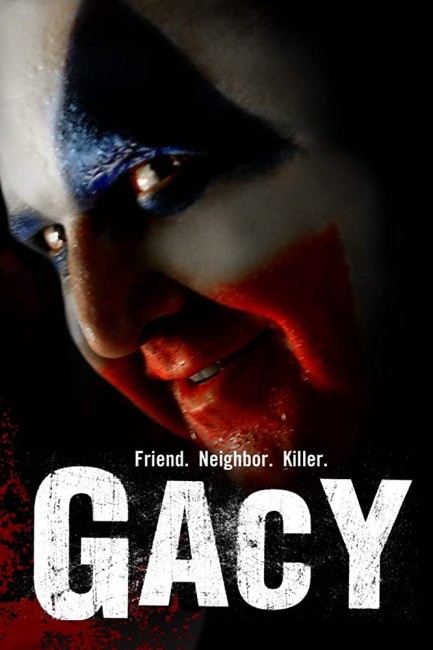 Des Plaines, Illinois, 1976. Neighbours complain about the putrid smell coming from the crawlspace under contractor John Wayne Gacy’s house. He attempts to cover it up. Though he is married, Gacy is at the same time hiring young men as workers and then hitting on them, as well as prowling the streets at night looking for hustlers. After luring them back to his house, he kills them during sadomasochistic sex and buries their bodies under the crawlspace.

John Wayne Gacy Jr is one of the most notorious of American serial killers. In 1978, Chicago police came to Gacy’s house while conducting a search for a missing teenager who had worked for him. A search of Gacy’s house revealed suspicious evidence that was eventually linked to a number of other missing boys. The big shock that came after Gacy’s arrest was when 27 bodies were uncovered buried in the crawlspace underneath the house. A further six bodies were also found having been dumped in the Des Plaines River (because Gacy had started to run out of room in the crawlspace). Neighbours had complained for some time about the smell coming from under the house, which Gacy had tried to cover with lime, and had explained it as a leaky sewage problem.

Charged with the murder of 33 teenage boys, the true story about Gacy eventually became known. Gacy was an upstanding member of the community and had done much in the way of work for volunteer organizations, including the much-remember occasions where he liked to dress up as Bozo the Clown at children’s parties. He had married twice and been the successful manager of an Iowa fried chicken outlet. Gacy also had a secret life where he liked to have homosexual sex with young teenage men. He had even started a contracting firm, employing teenagers on a casual basis, and frequently propositioning them for sex – a good many of his victims were employees. He liked to trick them into handcuffs and then violently rape them before disposing of their bodies. After an unsuccessful attempt to plead insanity at his trial, Gacy was eventually sentenced to death by lethal injection in 1994.

The film is extremely faithful to the details of the John Wayne Gacy case. The screenplay throws in numerous minor details about Gacy – his street light campaign, his prior career managing a fried chicken franchise, his heart problems, the stolen car incident, and gives an accurately detailed recreation of the episode where he abducted Jeffrey Ringall, offering him a joint as a pretext to chloroforming him, then raping him while imprisoned in a set of stocks and finally leaving him tied up in the park – that shows that the writers have at least done their research.

Although, at other times, Gacy is clearly at odds with the real story – the film omits an entire part of the story where the police searched Gacy’s house once, found items from the victims and brought Gacy in for questioning but let him go without charges despite finding a great deal of circumstantial evidence in the house. For some reason, an entire incident with the two detectives sitting outside his house and following Gacy about has been entirely invented in place of this part of the story.

Gacy is also the dullest of the modern serial killer biopics. Clive Saunders’s directorial style is unexciting. Moreover, unless one has some close, certainly not just casual, familiarity with the John Wayne Gacy case, it is not clear for some time what is going on. The film starts in dull and slowly – anyone who sits down to watch the film without any knowledge of the Gacy case will undoubtedly be puzzled, not to mention bored, by the goings on early in the piece about foul smells coming from under the house, Gacy’s debt problems and him trying to hustle young men. The film demands too much in the way of foreknowledge from its audience. It does pick up about halfway through with a few decent shock images – the scene where Mark Holton seduces the Jeffrey Ringall equivalent, gets him to step into his car and share a joint before he chloroforms him and the guy then comes around in a set of stocks; another scene where a guy comes to the door and next we see Mark Holton trying to drown him in a bath.

The other big disappointment about the film is the casting of Mark Holton as Gacy. A few years ago, Holton was playing roles as overweight teen bullies in films like Pee-Wee’s Big Adventure (1985), Teen Wolf (1985) and sequel and Leprechaun (1993). However, Holton does not have the range to play Gacy, he only seems a soft-headed and muddling do-gooder with a dark side. There seems little calculating threat and intelligence in Holton’s performance, certainly none of the ‘salesman charisma’ that the real-life Gacy was said to possess. A much more charismatic portrayal of John Wayne Gacy was given by Brian Dennehy in the tv mini-series To Catch a Killer (1992).

A number of other films in recent years have dealt with John Wayne Gacy, including Dear Mr. Gacy (2010), a true-life film about a student who interviewed Gacy for a term paper by fashioning himself according to Gacy’s victim profile; Gacy House (2010), a Found Footage film about ghost hunters encountering phenomena in Gacy’s house; the bizarre Dahmer vs Gacy (2011) involving the cloning of famous serial killers; while his ghost (played by John Carroll Lynch) turned up in the Devil’s Night episode of American Horror Story: Hotel (2015).