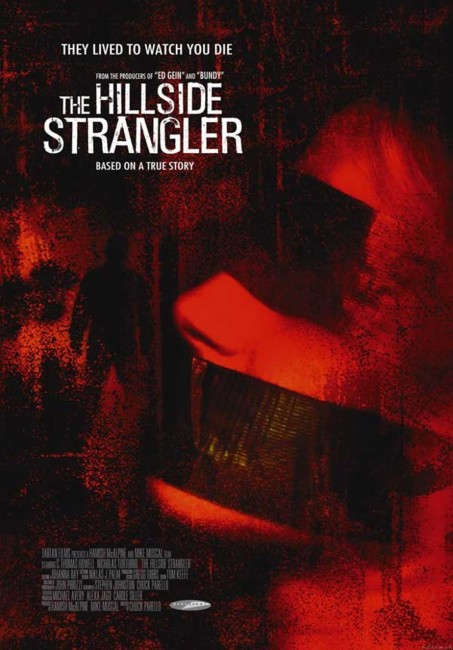 After being rejected for his application to the local police department, Kenneth Bianchi moves from Rochester, New York to Los Angeles to stay with his cousin Angelo Buono. The aggressive Angelo introduces the weaker Kenneth to the wild and crazy L.A. stripper scene, filled with numerous available women. Kenneth settles down with Claire Shelton and she becomes pregnant. At the same time, Kenneth sets up practice, fraudulently claiming to be a psychologist. Angelo pushes him to help set-up an operation where they pretend to audition two girls for modelling jobs and then force them to work as hookers. The scheme goes badly wrong as a local pimp and his heavies break up the operation and take all their profits. Angelo persuades Kenneth to take revenge by killing the prostitute that got them into trouble. The two then begin to take out their frustrations by killing women. Usually pretending to be police officers, they take the women away in handcuffs to rape, torture and strangle them. Believing their activities to only be one person, the press nicknames them The Hillside Strangler.

The Hillside Strangler(s) were cousins Angelo Buono and Kenneth Bianchi. (The Hillside Strangler was a sobriquet applied by the press, unaware throughout most of the killings that the crimes were being conducted by two men rather than one). After Bianchi came to L.A. in 1975, he and Buono set up a pimping operation. The two then started getting their thrills by torturing and strangling women, leaving their naked, dead bodies in publicly visible places. One of the techniques they developed was to cruise neighbourhoods, pull women over by flashing fake badges and pretending to be undercover cops and then abducting them. Between November 1977 and May 1978, the two together were responsible for the murders of ten women. The two parted ways in mid-1978 but Bianchi was arrested in early 1979 when he killed two girls on his own, but without Buono’s supervision made mistakes that had him arrested. Both were sentenced to life imprisonment in 1983; Buono died in prison in 2002.

Ed Gein was a disappointment. While Chuck Parello and regular co-writer Stephen Johnston had done a fine job in researching their subject’s life, the film itself seemed critically tame – as though too afraid to venture into any of the perverse psychopathology and grimness of the material that surrounded their subject’s life. At the time, I wrote: “If the film [Ed Gein] had explored these areas, it quite possibly would have been a classic, instead the film has barely even tiptoed up to the line of US censorship.” Such however cannot be said for The Hillside Strangler. It is as though Chuck Parello and Stephen Johnston have set out, determined to make up for the tameness that affected Ed Gein. The result is a film that takes one aback in its willingness to vault over said line.

Chuck Parello has certainly gained a good deal more in the way of directorial assurance in the time between Ed Gein and The Hillside Strangler. The interplay between the two principal actors has a beautiful tension. The scenes watching C. Thomas Howell and Nicholas Turturro turning the girls into whores is unnervingly credible – the shock that comes as we turn from the playing out of a model fantasy to Nicholas Turturro starting to hit the girl and calling her a cunt.

The film becomes especially brutal during the scenes where they abduct prostitute Kent Masters King and Nicholas Turturro goads C. Thomas Howell on to kill her in the backseat as he drives “Be a man … grow some balls … choke her air supply … you grew some big ones tonight” and of Howell then fucking the corpse in the backseat after she has expired. Parello throws in all sorts of cutaways and split screen bubbles of the two of them killing women, including holding them down while they struggle with plastic bags over their head or placing a gas pipe into the bag.

The film is incisively written and genuinely charged. This is none more evident than the scene where Nicholas Turturro and C. Thomas Howell have dinner with Buono’s mother (Lin Shaye) where she tells the story of how Buono opened the gas supply in her house hoping she would blow herself up when she lit a cigarette, all because she refused to buy him a car – and then after learning that there were neighbourhood kids in the next room that she had been babysitting, Buono lit a cigarette himself, saying “Fuck the kids”. Or of the scene where he boasts how he broke his stepdaughter in.

The film has an electrifyingly out there performance from Nicholas Turturro as Angelo Buono. Nicholas Turturro is perhaps too short and plumper in the face to look like the real Buono, but he throws everything he has into the performance. Turturro, brother of the better known John Turturro, first came to attention as the Latin American regular on tv’s NYPD Blue (1993-2005) where his role was that of a nice guy without an aggressive bone in his body. So seeing Turturro playing at 180 degrees remove here proves doubly a shock. His foul-talking, bullying and eventually brutally sadistic Buono gives the film a considerable charge. C. Thomas Howell, a potentially good actor who has languished in far too many B action movies over the last decade, is also well cast as Kenneth Bianchi. Introduced as someone uncertain, lacking in confidence and wimpy, it is wonderful seeing Howell’s smoothness coming out during the scenes seducing Allison Lange and as he sets up his psychologist’s practice.

For the most part, Chuck Parello and Stephen Johnston are extremely faithful to the details of the Hillside Strangler case. They include all manner of trivial details – like the turquoise ring from one of the victims that Bianchi gave to his girlfriend; his Cadillac sedan; his bogus claims to be suffering from lung cancer; his ride arounds with the local police department; recreations of several of the abduction scenes, most notably where they attempted to abduct Catherine Lorre (the daughter of horror actor Peter Lorre) outside her house. Even the piece about Buono breaking his stepdaughter in is factual.

One of the aspects where the film does diverge from the facts is the account of what happened with the girls that Bianchi and Buono kept as prostitutes. The film only lets us see two of these, whereas in actuality there were several different girls. Also the film manufactures a different reason for the break-up of the pimping operation – here it invents the more dramatic one of local gangs taking affront to their turf being trod upon, where in reality it ended when a lawyer (who is not portrayed here) helped one of the girls escape. Bianchi and Buono did run afoul of gangs after stealing their client list and here the events are ingeniously rearranged and combined with the break-up of the operation.

The other notable change is the elimination of the sheer bizarreness of the events that came after Bianchi and Buono were arrested. There is no mention of how Bianchi fabricated a diagnosis of split personality and fooled at least one psychologist in an elaborate attempt to create an alibi for himself. Nor how he was persuaded to testify against Buono but tried to confuse and obfuscate the testimony so as not to be targeted as an informant in jail. There is only very brief mention of the bizarre figure of Veronica Compton. Compton was a would-be playwright who was writing a play about a killer and wrote to Bianchi asking for some pointers. After meeting Bianchi, she became infatuated with him and he persuaded her to conduct a murder patterned after their m.o., even to implant semen he had smuggled out of jail, in order to make the police think they had the wrong person. She lured a woman to a motel to strangle her but bungled the operation. This is barely dwelt on in a rushed scene towards the end and certainly with none of the utter outlandishness of how it happened.

Chuck Parello has yet to make another film, although on the basis of The Hillside Strangler one wishes he would get the opportunity to do so sometime soon.