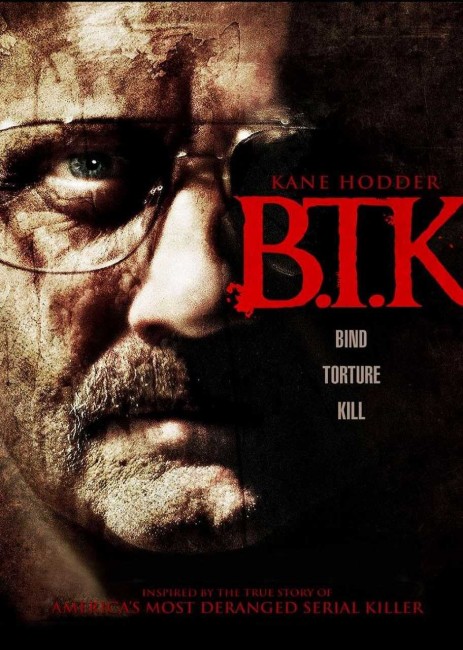 Dennis Rader is the town Compliance Office in Park City, Wichita. It is his job to enforce minor rules about the length of grass, stray animals, parking infringements and so on and he takes to this with tyrannical relish, terrorizing people over minor infractions. Dennis is a family man with a wife and two daughters and is also accepted as the president of his church. However, Dennis also has a secret life as the serial killer B.T.K – so nicknamed for his desire to Bind, Torture and Kill – where he breaks into homes and takes great relish in strangling his victims to death.

B.T.K. is based on the story of the BTK Killer Dennis Rader who killed ten people in and around Wichita, Kansas over three decades up until his arrest in 2005. Rader first began in 1974, slaughtering a husband, wife and their two children. Victims sporadically followed over the years, usually single women that Rader would carefully stalk and then break into their homes and strangle. In one case, he even locked one woman’s three children in the bathroom while he strangled her in the next room. There were often long periods between killings but during this time Rader kept up a series of taunting letters to the press. In these there seems a clear need for recognition, he at one point asking why nobody has given him a nickname and suggesting several of his own (it is out of these, stating how he liked to Bind, Torture and Kill victims, that the name BTK Killer stuck) – at another point, he even rang in to report one of his own killings when it was not noticed. Rader was an exceedingly careful planner and his remaining uncaught over the three-decade period became a considerable source of vexation to authorities.

Rader’s downfall came about when he resurfaced during the media focus on the thirtieth anniversary of the original killings. Rader wrote asking the police if they would be able to locate him if he sent them a floppy disk of material. The police naturally answered no, whereupon they promptly identified him from information in the file properties on the disk. Rader was arrested, made a full confession of his crimes and received ten life sentences. The B.T.K story has also seen two other films adaptations with The Hunt for the BTK Killer (2005) starring Gregg Henry and Ulli Lommel’s cheap B.T.K. Killer (2005) with both Eric B. Gerlemen and Gerard Griesbaum as Rader, as well as the excellent The Clovehitch Killer (2018), which was loosely based on B.T.K.

Michael Feifer took some criticism in his earlier serial killer biopics for frequently abandoning the facts in the lives of his killers. He has deflected the problem here somewhat by inserting an opening disclaimer: “This is a Fictional work based on a True Story.” This is something that essentially allows Feifer to take whatever facts of the case suit his needs and abandon the rest. This is an approach that is frustrating (not to mention lazy) as greater adherence to the facts of the Dennis Rader story would have made a far more interesting film, whereas in preferring to create Rader as his own character, Michael Feifer only strains at cliches.

Michael Feifer adds a number of highly dubious aspects to Dennis Rader’s nature – like that he used to pay prostitutes for bondage scenarios. (Rader did admit to bondage fascination during his confession but he was clearly a dominant, not a submissive as the film has him). One of the aspects that the film does nail correctly is Rader the petty bureaucrat, enacting the rules under his governance with tyrannical authority and hair-splitting mean-spiritedness. Feifer also blames much on Rader’s Baptist household and sexless marriage, although a reading of Rader’s background shows that his behaviours had taken root in early childhood. The film also writes a speech that one of the daughters delivers near the end where she slams Rader for being distant from them because he wanted sons instead of two daughters, when in reality Rader had one son and one daughter.

One of the disappointing omissions in the film is of the extensive correspondence that Rader used to engage in with the police and media, which became as prolific as the correspondence the Zodiac Killer is noted for. There is brief mention of the police having traced the computer disks that led to Rader’s eventual capture, although this comes out of the blue near the end and without any context. The film also condenses the timeframe of Rader’s killing spree down to what looks like little more than a matter of months – one where neither Rader nor his daughters appear to age any – when in fact Rader’s crime spree stretched for three decades between the mid-1970s up until his arrest in 2005 with there being periods of more than a decade in which his activities went cold.

The various killings are depicted with little regard for replicating the detail of Dennis Rader’s m.o. Rader is shown strangling victims but there is nothing of the extensive stalking and sexual fantasy he used to engage in. The closest we get is a scene where Rader enters a house and strangles a girl and shoots her boyfriend, which vaguely replicates the scene where Rader killed Kathryn Bight and shot her brother Kevin in 1974. Rader was a Cub Scout leader, although the film makes the bogus claim that he used to go on fictitious Boy Scout outings and killed a young Boy Scout during one such outing.

There are other completely fictional scenarios here like where he fools a teenage girl into looking in the back of his van for her missing dog and then clubs her, while at the same time picks up a young missing girl and takes her home. The clear point about Rader that Michael Feifer seems to miss is that he was a methodical planner, not an opportunity killer. At least, Feifer directs some of the scenes passably well – particularly the scene where Kane Hodder bursts in to take revenge on hooker Odessa Rae for walking out on him, as well as the scene where he inveigles the young girl into his van where we wonder what he is going to do, before he takes her home and rebukes her parents for not looking after her.

As with Ed Gein, Michael Feifer has miscast the title role with former stuntman Kane Hodder who gained fame as Jason in several of the Friday the 13th films. Rader was 5’11” in real-life and in photos seems on the physically diminutive side, while the physically hulking 6’3″ Hodder seems totally wrong for the role. To his credit, Kane Hodder gets the role of the milquetoast, petty bully nailed fairly well. Certainly, watching Kane Hodder’s bland, bespectacled Dennis Rader here it is a complete chameleon shift from his depiction of the brutal hulking Ed Gein. As long as it is considered as the fictional depiction that Feifer sees it as being, Kane Hodder delivers the part reasonably well. Beyond Hodder, all of the cast are unknowns.