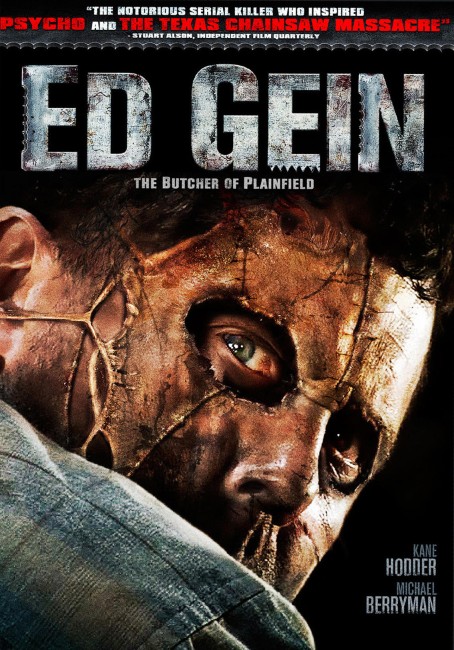 The small town of Plainfield, Wisconsin in 1957. Police are trying to make sense of a sudden spate of murders and disappearances around the town. Behind these are big, hulking farmer Ed Gein who is abducting and killing people.

This is a film based on the exploits of the notorious Wisconsin necrophile and murderer Ed Gein (1906-84). Gein was arrested in Plainfield, Wisconsin in 1957 by police who were looking for missing hardware store owner Bernice Worden. Searching Gein’s farm, they were shocked to not only find Bernice’s mutilated corpse in the barn but a house filled with body parts stolen from graves, which Gein had made into lampshades, bedheads and items of furniture. Gein confessed to stealing the bodies of recently buried women, skinning them and then wearing their skins, including vests made of breasts. Ed Gein was only ever convicted of two murders, although was suspected of others. He was found to be criminally insane and committed to an asylum where he remained until his death in 1984.

Ed Gein’s exploits have fuelled a number of films with Deranged (1974) and Ed Gein (2000) before this, while his habits of skinning people, keeping their bodies and making their remains into furniture are said to have been the inspiration behind films such as Psycho (1960), The Texas Chain Saw Massacre (1974) and The Silence of the Lambs (1991). Gein (as played by Michael Wincott) even turns up as a character to have conversations with and act as psychologist to the famed director in Hitchcock (2012).

Ed Gein: The Butcher of Plainfield comes from Michael Feifer, a director/producer who specializes in low-budget films based on true crime/serial killer cases, he having subsequently also directed Chicago Massacre: Richard Speck (2007), B.T.K. (2008), Boston Strangler: The Untold Story (2008), Bundy: An American Icon (2009) and Drifter: Henry Lee Lucas (2009). Feifer has also directed a handful of low-budget horror films with A Dead Calling (2005), Lethal Eviction (2005), The Graveyard (2006), Grim Reaper (2007) and Bram Stoker’s Dracula’s Guest (2008). Since the 2010s, he appears to have given up the horror genre and is now making family films.

Not having seen any of Michael Feifer’s other films at the time I saw Ed Gein: The Butcher of Plainfield, I am not in a position to comment about his treatment of true crime cases overall. However, the effect here is that Feifer has made a film about a true-life serial killer and thrown the facts up in the air and selected only the ones that suited his particular interpretation. The real Ed Gein was only ever convicted of two killings (although was suspected of at least three others). The film adds a bunch of other murders to Gein’s count – including a gravedigger who comes across him in the process of robbing a grave. Gein is even seen dragging a victim behind his pick-up truck at one point. Gein’s fetish was necrophilia, having sex with and dressing in the bodies of the dead, whereas the film tends to give the impression that he was akin to Texas Chain Saw‘s Leatherface – a hulking man who just killed whatever was in his way.

The scenes where Gein abducts barmaid Caia Coley and storeowner Priscilla Barnes do approximate the two killings that Gein was charged with – respectively the murders of bar owner Mary Hogan and hardware store proprietor Bernice Worden. That said, there is absolutely no truth to the film’s claim that Bernice Worden was the mother of one of the investigating police officers, and no record that said cop’s fiancee was also abducted by Gein after they crashed on the way to the scene. Moreover, the film telescopes the drama down to something that appears to happen within the space of about two days when in fact there was four years between the time that Gein killed the two women.

The other thing that is missing is any explanation of Ed Gein’s psychology – we get some scenes where the faces of women morph into his nagging mother but unless anybody is familiar with Gein’s story the significance of this would not be understood. Almost everything that Ed Gein is depicted as doing in the film is a pure fiction. Never has the end legal copyright notice “Any resemblance to persons living or dead is purely coincidental” seemed truer than it is here.

This is also now much more of a version of the Ed Gein story by way of the remake of The Texas Chainsaw Massacre (2003) (which is an irony in that the original Texas Chain Saw borrowed the character of Leatherface and the house with human body parts as furniture from Gein). The opening credits pan through a charnel house of artfully arranged grisly exhibits, all shot with lurid lighting and fractured editing schemes, is almost identical to the way that the Texas Chainsaw remake dressed its background. This is also an Ed Gein film that has readily taken advantage of the modern Torture Porn cycle that emerged following the success of Saw (2004) and Hostel (2005) – thus we get gruesome scenes with Gein cutting the legs off victims or setting the bone in a broken leg. At one point, there is the completely wild image of a skinned face pinned up in Gein’s kitchen.

The irony of this is that Ed Gein 2000 was a film that paid scrupulous regard to telling the real Ed Gein story and delving into his fractured psychology but failed because it was too tame when it came to depicting his grisly activities. On the other hand, Ed Gein: The Butcher of Plainfield has no qualms about showing this and we get scenes with Gein sewing up a body of skinned breasts and robbing graves. On the other hand, this version seems to have done nothing beyond the most basic of research into the details of the Ed Gein case. If the two films had been combined somehow, one suspects that we might have had one good rather than two mediocre films. As it is, the best Ed Gein film still remains Deranged, even though it widely differed from the facts and gave Gein a different name.

The role of Ed Gein is played by Kane Hodder who has a long history in horror, most notably having starred as Jason Voorhees in Friday the 13th Part VII: The New Blood (1988) through to Jason X (2001) and a number of other parts. This cannot help but seem a piece of stunt casting ie. the role of Ed Gein cast with the actor who gained fame for playing Jason. However, the 6’3″ Hodder is physically all wrong for the role of Ed Gein. Gein was not a hulking mountain of a man, indeed the photos that survive show him as scrawny, middle-aged and on the short side – he looks only around about 5’3″. Moreover, rather than physically threatening, Gein was described as effeminate, something that made him a target by bullies while younger. On the film’s own terms, Kane Hodder does a passable job of giving evil glowers and looking the part of a hick, mentally retarded backwoods farmer.