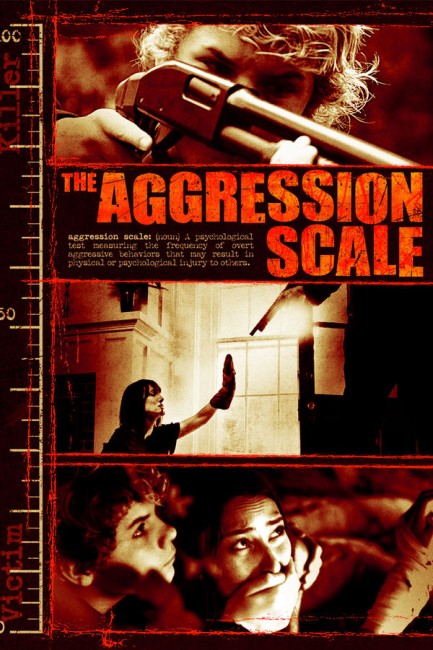 Bellavance is out of jail with forty-eight hours before he is due to go back in on a murder charge. He gives Lloyd and a group of thugs orders to track down and kill a list of people that he suspects have stolen the money from his hidden account. Meanwhile, Bill Rutledge and his new wife Maggie settle into the new home in upstate New York. Their two children, Bill’s behaviourally troubled young son Owen and Maggie’s teenage daughter Lauren, both resent being forced to move. As they settle into the house, Lloyd and men burst in and demand the money. Bill and Maggie are killed as they deny knowledge of its whereabouts. Owen and Lauren flee as the thugs come to eliminate them too. During the pursuit however, Owen proves surprisingly resourceful in being able to jury-rig a series of booby-traps to take out their pursuers.

The Aggression Scale is a horror version of Home Alone (1990), the big hit comedy wherein Macaulay Culkin defends the family home using a variety of improvised weapons against a bunch of thugs intent on breaking in after he is left at home alone. I had always maintained that when you stopped looking at it in terms of a harmless family comedy, Home Alone was an incredibly violent film that seemed to get away with advocating a child repeatedly brutalising a bunch of goons because it was being pitched as G-rated slapstick humour. Apparently, I am not the only one to which this has occurred. The Aggression Scale is simply Home Alone reconceived as one of the recent spate of ultra-violent home invasion films a la The Strangers (2008), Kidnapped (2010), Mother’s Day (2010), You’re Next (2011), In Their Skin (2012), The Purge (2013) and Berkshire County (2014).

You get the impression that Steven C. Miller enjoys jolting middle-class sensibilities. The opening scene of the film involves a female jogger running along a suburban street, waving to two neighbouring children and then entering the front door of her house only to be blown back out by a shotgun blast. Similarly, after introducing mobster Ray Wise and the thugs, the film then spends some twenty minutes detailing the mundane lives of newlyweds Boyd Kestner and Lisa Rotondi and the dissatisfaction of their respective children Ryan Hartwig and Fabianne Therese as they move to a new home. The abrupt jolt comes in then seeing both parents violently blown away as the thugs turn up.

Thereafter The Aggression Scale kicks into its Home Alone scenario and we see Ryan Hartwig improvising various ingenious means of fighting back against the killers. Steven C. Miller creates reasonable tension and much in the way of brutal impact. The question is is there anything else to the film. The problem I had is that there doesn’t appear to be. It is a film where beyond its premise, everything has been in terms of mechanically serving up tension and brutality set-pieces. There are interesting issues that lie underneath the surface of the film – the idea of a kid who has repressed his emotions and employs calculated violence with unemotional regard in order to despatch his bullies, two minors left to survive on their own – but the film never emotionally travels inside the journey these characters are undergoing. Compare this film to something like The Night of the Hunter (1955), which transformed its children’s flight up into something extraordinary. Here by contrast you never feel emotionally engaged in the terror of the flight the kids are undertaking; instead, all that you feel is the turning of a series of suspense plot mechanics and the wheeling into place of various violent set-pieces.

Someone in the casting department appears to be a fan of tv’s late lamented Twin Peaks (1990-1) and has cast two of its regular players Dana Ashbrook and Ray Wise. Ashbrook in particular is an actor that one cannot remember seeing in anything this side of the 2000s so it is somewhat of a surprise seeing him no longer a pouty troubled teenager and now with with greying hair, moreover playing a violent thug.