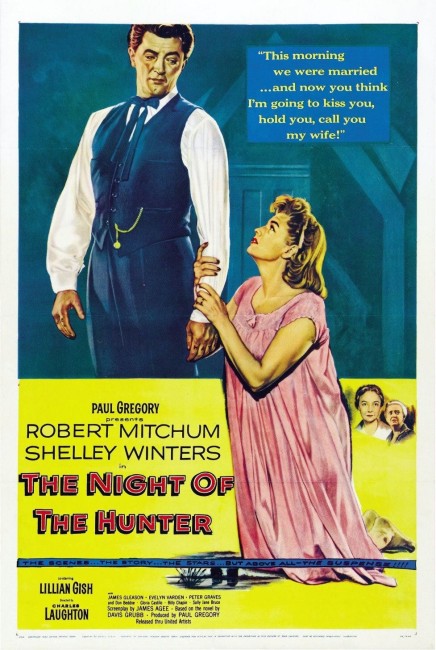 During the Depression, Ben Harper steals $10,000 from a bank to try and help his family but is forced to shoot two men in order to get away. Before he is arrested, he tells his two young children, John and Pearl, the hiding place of the money. In jail, Ben shares a cell with hellfire preacher Harry Powell who becomes intrigued when he hears Ben talking about the money in his sleep. However, Ben does not tell him its hiding place before he is hung. And so Harry heads to Ben’s hometown and befriends then marries Ben’s widow in order to find the money. Young John realises that Harry is lying, however the adults are swayed by Harry’s hellfire preaching and nobody will believe him. When Harry kills their mother, John and Pearl are forced to embark alone on a frightening danger-laden journey in search of safety, all the while pursued by Harry.

The Night of the Hunter was the first and only directorial outing from actor Charles Laughton (1899-1962), best known for classic acting roles such as Dr Moreau in The Island of Lost Souls (1932), Captain Bligh in the Mutiny on the Bounty (1935) and Quasimodo in The Hunchback of Notre Dame (1939). Criminally, The Night of the Hunter was a failure in its time, and Charles Laughton resultingly returned to acting, never to direct again. It is a genuine tragedy that this happened and that the film was ignored, for it has an import to the thriller/horror genre that is not incomparable to the stylistic shadow that Orson Welles cast on cinema when he made Citizen Kane (1941).

The Night of the Hunter is remarkable both for its extraordinary atmosphere and visual palette, as for its willingness to question values that no other films did in the 1950s. Charles Laughton crafts the film into something akin to an Expressionist fairy-tale. Robert Mitchum’s arrival in town, for instance, is seen as the passing of a giant illuminated black hat across the window of the parlour the children play in. Some images are striking – like the discovery of Shelley Winters’s body in a Model T at the bottom of the river, her hair billowing in the current among the weeds there.

However, it is when the film joins the children’s journey down the river that it enters into an almost a dream-like fairy-tale landscape. Shots are foregrounded by strikingly hyper-emphasised spider webs, rabbits and frogs. Songs on the soundtrack echo in the ethereal beauty of a child’s voice. Like something out of The Cabinet of Dr Caligari (1919), barns and houses are starkly shadow-lit against the landscape; sheep are seen in a field outlined by the frame of a foregrounded wooden fence; and Robert Mitchum’s demon pursuer is seen only as a distant shadow on horseback crossing against the skyline.

Charles Laughton is a remarkably adept director. He is alerted to the way small town people talk and gets some fine performances here from Shelley Winters and Evelyn Varden. The small town scenes are remarkable for their turning inside out of the assumptions that America made about itself in the 1950s. The trite, banal homilies that would be seen as a source of comfort in a film by say Frank Capra are instead turned around to be used as something immensely threatening by Robert Mitchum’s silky conman.

Robert Mitchum gives a dominatingly intense performance – the scene where he takes young Sally Jane Bruce onto his lap and nearly succeeds in charming the whereabouts of the money out of her, deliberately manipulating her innocence, is a very scary one. This, alongside Cape Fear (1962) which also featured Mitchum as a demon figure undermining smalltown values, is the finest piece of acting that Mitchum, usually an actor in Westerns during this era, has ever done.

What seems to light the film up is a turbulent struggle between Baptist hellfire and suppressed passion. Its central figure sways adults with an almost sexual passion in his crazed rantings about damnation. We are never certain whether Robert Mitchum believes what he says or whether he is a conman – he certainly seems to believe it when it comes to women whom he is drawn to but then rebukes upon any show of licentiousness. In one of the most striking running subplots, he spurns Shelley Winters’s request for conjugal fulfilment and with an extraordinary moment of masochism she comes to the self-realisation that she has been brought together with him to be purified.

The end of the story has been criticised for its sentimentalism but it is not that inappropriate, for the film is about deliverance from evil and a physical journey into redemption. What better a place for the children to be delivered to from its turbulent cesspit of Baptist guilt than to a redemption that resembles the purity of a Christmas card setting? In an extraordinary moment near the end, Robert Mitchum sits waiting by a fence singing hymns and the children’s deliverer Lillian Gish joins him, both opposing sides momentarily singing together. The entire film hums with this dialectic between twisted Baptist repression and hellfire damnation and the innocence of children.

The film was badly remade by director David Greene as a tv movie, Night of the Hunter (1991) with Richard Chamberlain in the Mitchum role and Diana Scarwid in the Shelley Winters part. The tv movie reduced the film to merely a thriller and lacked any of Charles Laughton’s style.