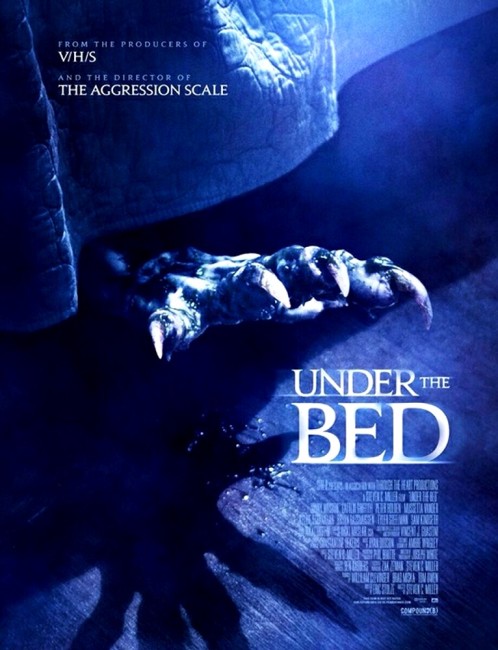 Teenager Neal Hausman returns home after two years staying with an aunt in Florida. He was sent away following the death of his mother in a fire amid concerns over his mental health. In the interim, his father Terry has remarried to Angela. Neal happily reunites with his younger brother Paulie. It soon becomes apparent that Paulie shares Neal’s belief that there is something monstrous under his bed. Their father refuses to accept the idea and the two boys are stuck trying to combat the monster that emerges in the dark.

Prior to this, Steven C. Miller’s other films have largely left me feeing meh. I had always assumed that Under the Bed was a children’s horror similar to something like Monster House (2006), The Hole (2009) or ParaNorman (2012). I ended up being quite surprised after watching it as it is neither a children’s horror and ends up defying the average expectations I had after watching Miller’s other films. I would call it his best film to date.

The premise could easily have been played a different way and emerged as a cutsie monsters under the bed/in the closet film like Little Monsters (1989) or Monsters, Inc. (2001). However, Miller makes an effort to make this as an adult horror film the whole way. Particularly good is the establishment of the relationship between the two brothers where the two actors, Jonny Weston and Cattlin Griffith, both give highly believable performances.

The film takes its time establishing the groundwork before heading in – Jonny Weston’s return home; cryptic mention about the circumstances under which he left, which may have been troubled or psychological in nature, it even being suggested that he was responsible for his mother’s death; his brother confirming that he has seen what is under the bed too – all without actually letting you know what it is they are facing. Miller establishes good characters, a messed-up family dynamic, and creepy atmosphere – what else could one ask of a horror film?

There is a great scene where Miller finally lets his punches fly where the boys are in the bedroom, there is rattling from beneath the bed and objects are suspended in mid-air and the monster emerges to attack them before father Peter Holden bursts into the room and then the film abruptly pulls back to show Jonny Weston seeming to be attacking Cattlin Griffith. It is a scene where everything spins around and in an instant makes us doubt what is going on. The film becomes a little generic once the monster is let out of the bag but one cannot fault anything in the build-up.