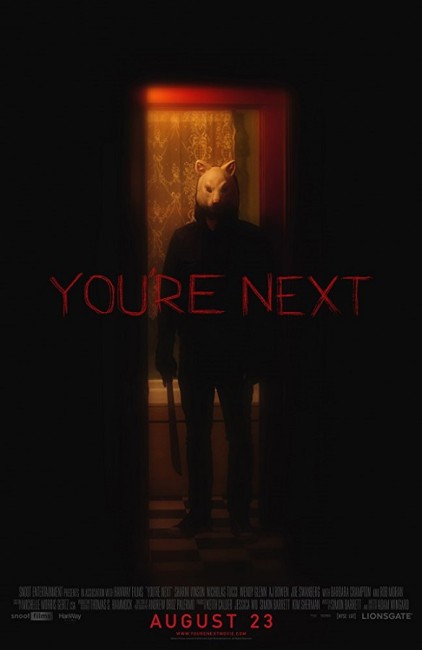 Paul, a wealthy businessman, and his wife Aubrey gather their family to celebrate their thirty-fifth wedding anniversary. They are joined by their four children, Crispian, Drake, Felix and Aimee and their respective partners. Just as they sit down to dinner, unseen assailants begin firing crossbow bolts through the windows. In the chaos, several of the group are killed and others injured. A desperate game of survival begins as those remaining try to avoid the masked attackers as they surround and enter the house, determined to kill everybody inside.

Adam Wingard has emerged as a name to watch in the horror genre in recent years. Wingard first appeared with the horror film Home Sick (2007) and then gained festival acclaim with the hallucinatory horror Pop Skull (2007). Wingard subsequently went onto make the serial killer film A Horrible Way to Die (2010) and the non-genre likes of What Fun We’re Having (2011) and Autoerotic (2011), the latter co-directed with Joe Swanberg, as well as the subsequent The Guest (2014) about a psychopathic Iraq War veteran, Blair Witch (2016) and the English-language remake of Death Note (2017).

The complaint that could be made of Adam Wingard’s films this side of the 2010s is that he has neglected original works in favour of having fun in the boy’s club where he has become the most prolific director working on an increasing number of multi-director anthologies, having directed segments of The ABCs of Death (2012), V/H/S (2012) and V/H/S/2 (2013). The episodes he has delivered for these have seemed trivial and forgettable at best; to be making no real effort at worst (the Q is for Quack episode of The ABCs of Death).

It is good then to see Wingard back at directing full-length material where he can flex his muscle and fulfill the promise he has demonstrated elsewhere. You’re Next is not entirely free of the sense of the boy’s club and the cast is filled with a number of Wingard’s in-club directors – the brother Drake who gets an arrow in his back is played by Joe Swanberg, Wingard’s co-director of Autoerotic and director of a number of original non-horror mumblecore films; Ti West, the rising director of The House of the Devil (2009) and The Innkeepers (2011) plays the ‘underground documentary-maker’ who gets killed early in the show; while Larry Fessenden, the head of Glass Eye Pix and director of Habit (1997), Wendigo (2001), The Last Winter (2006) and Beneath (2013), plays the neighbour who is killed in the prologue and spends the rest of the film as a naked body on the couch.

You’re Next premiered in the Midnight Madness section of the 2011 Toronto International Film Festival but for reasons unclear sat on a shelf until it received a theatrical release in 2013 where it promptly became Adam Wingard’s most high-profile film to date. Several critics alikened it to a slasher film but that is not quite the case – it resembles more one of the home invasion thrillers that we have seen in the last few years with the likes of Funny Games (1997), The Strangers (2008), Kidnapped (2010), Mother’s Day (2010), The Aggression Scale (2012), In Their Skin (2012), The Purge (2013) and Berkshire County (2014). (The killers in their animal masks remind of very much of The Strangers).

As soon as he gets past the set-up scenes, Adam Wingard has a clear and singular purpose – to brutalise the characters and give the audience an intensive workout. To this extent, the film strips the characters to not much beyond a few descriptive sketches and then lets Wingard go for broke. At which you cannot deny he does a fair job. This is one of those Everyone Dies in the End films and the despatches come with harsh and unsentimental regard.

Thankfully, this is also not one of the modern horror films that sees the need to keep making reference to other horror films (at most, Wingard gets in a cameo from genre regular Barbara Crampton of Re-Animator (1985) as the mother) or spoofing the conventions. The film never particularly wades in blood – at least in the sense of a Saw sequel – but Wingard doesn’t exactly hold back either. The plot holds a number of whiplash twist and surprises that keeps everything interesting. And the result is an undeniably satisfying show all around.

All of the largely unknown cast, who are notedly in their thirties upwards as opposed to the usual good-looking teens, play well. Many of these come from Wingard’s regular troupe of actors. Australian actress Sharni Vinson, last seen dealing with killer sharks in a supermarket in Bait (2012), gets a particularly punishing workout as the group’s survivalist-minded Final Girl.