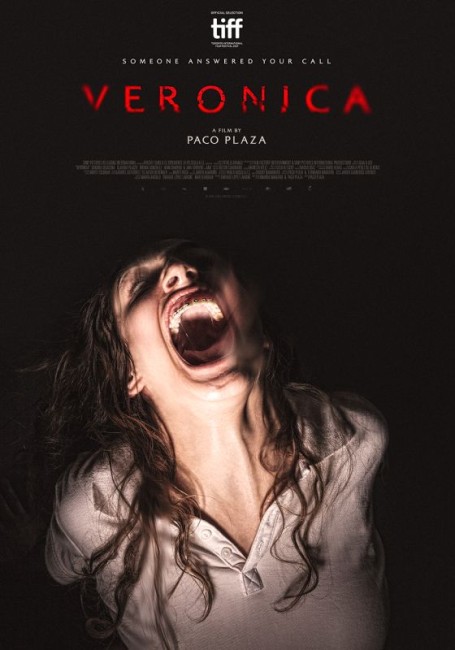 Madrid, 1991. Police are called to a disturbance at the apartment where Ana Gomez and her four children live. Ana was always working at a nearby cafe while her fifteen year-old daughter Veronica was left in charge of the other young three children. Three days earlier, Veronica took an ouija board to school. While all the others were watching an eclipse, she and two friends played with the board in the school basement where Veronica was hoping to use it to talk to her late father. This went wrong and Veronica collapsed into a trance. Back home afterwards, Veronica believed she could see a shadowy presence moving through the apartment and intent on threatening the other children.

Paco Plaza is one of the big names of modern Spanish horror. Plaza first appeared with the horror film Second Name (2002) and then the English-language Romasanta: The Werewolf Hunt (2004). Plaza subsequently gained a good deal of attention as co-director with Jaume Balaguero of the zombie Found Footage film [Rec] (2007) and its sequel [Rec] 2 (2009) and then on his own as director of [Rec]3: Genesis (2012).

Veronica is based on the supposedly true story of Estefania Gutierrez. In either 1990, 91 or 92 (accounts vary), police answered a call to a disturbance in the Madrid suburb of Vallecas where the Gutierrez family claimed to be being haunted by loud noises and shadowy figures. Police inspector Jose Pedro Negri entered the property where they were attacked by animated objects. The Gutierrez family believed this was the spirit of their teenage daughter Estefania who had died several years earlier after being caught at school with an ouija board. The police witnessed things like a crucifix falling and found a photo off Estefania with the face burned off while still in its frame. What is unusual about this is that reports of the supernatural occurrence were entered into the official police record, including photos of the scene. This made the Estefania Gutierrez case into one paranormal incident that is better officially documented than others.

With the Estefania Gutierrez story well known in Spain, Paco Plaza has mounted it as a true(ish)-life horror film clearly intended in the same vein as The Conjuring (2013) and The Conjuring 2 (2016). For drama’s sake, Plaza has considerably embellished the events that happened. The father has been written out of the story when in reality he was alive and present when the police arrived. Crucially, when the police entered the apartment, they didn’t find Estefania alive as she had died several years before the reported supernatural occurrence.

Moreover, the film telescopes the events down to three days whereas Estefania suffered several months of protracted seizures between the incident with the ouija board at school and her death. The film and the real-life incident even come from different perspectives – the reported incident involving the Gutierrez family can be regarded as a haunting of the late Estefania’s spirit; by contrast, the film is about the very much alive Estefania/Veronica dealing with something she has unleashed during the seance.

Veronica sits astride the possession/haunting story – even at the end you are not entirely sure which it is. These are both well and truly genres that have been overused in the last few years. The hope is that Paco Plaza, who has made some estimable horror films elsewhere, will do something to elevate the genre. Alas, you keep waiting for him to do fire up the material or overturn the cliches as he plods through barely interesting scares like Sandra Escacena cutting her finger or her hand trembling as she tries to put food in her mouth.

The performances – including Ana Torent, the now grown-up young child from The Spirit of the Beehive (1974) as the perpetually absent mother – are all reasonable. There are a few scenes with shadowy figures appearing throughout but nothing that causes the tension level to rise any. You finally think something eerie is going to happen after nearly eighty minutes in the scenes with the children alone in the house as Sandra Escacena tries to conduct a seance to banish the spirit and in particular the scene where the glass keeps rolling right through the house but this dissipates into a not terribly interesting payoff.