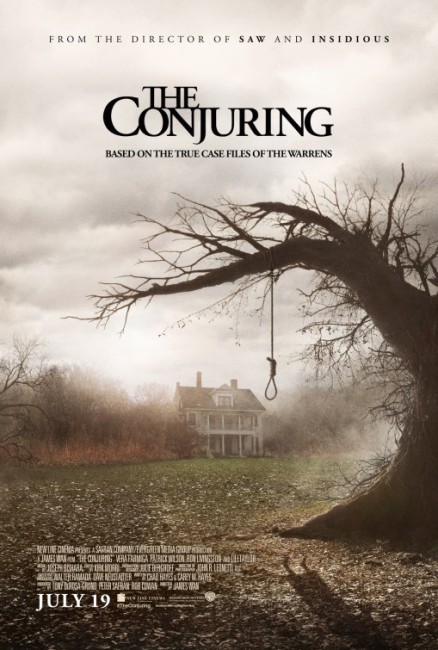 In 1971, Roger and Carolyn Perron and their five children move into a house they have bought in Harrisville, Rhode Island. Soon after, it becomes apparent that the house is haunted by a malevolent entity that creates apparitions, slams doors, traps people in the cellar and so forth. Carolyn goes to a lecture being held by paranormal investigators, husband and wife Ed and Lorraine Warren, and begs their help. The Warrens travel to Harrisville and conduct an investigation where they determine that the house is being haunted by a demonic spirit that is trying to weaken the Perrons so that it can possess the living.

The Conjuring was the fifth directorial outing for director James Wan. Wan made an extraordinary debut as the director of the first (and best) Saw (2004) – before the series descended into gratuitous sadism and gore – in which he created a torturously wound work of suspense. Wan subsequently went onto a strong genre career with the revenge film Death Sentence (2007), the ventriloquist’s dummy horror Dead Silence (2007), a further haunting film Insidious (2010) and its sequel Insidious Chapter 2 (2013) released subsequent to this, and Aquaman (2018). All of these show Wan as a director of finely attuned genre sensibilities and considerable finesse in the art of making an audience jump.

Though the title sounds more like a film about a magician conducting arcane rites, The Conjuring is both a haunted house and a possession film. It also is one of an increasing number of such films that advertise themselves with the byline ‘based on a true story’. We have a variety of haunted house films claiming to be based on truth – The Amityville Horror (1979), An American Haunting (2005), The Amityville Horror (2005), The Haunting in Connecticut (2009) and Winchester (2018). There have been a similar number of possession/exorcism films of recent supposedly based on true events – Possessed (2000), The Exorcism of Emily Rose (2005), Blackwater Valley Exorcism (2006), The Rite (2011), The Possession (2012), Deliver Us From Evil (2014), The Vatican Tapes (2015) and The Crucifixion (2017).

In this case, the ‘based on a true story’ is supposedly an incident taken from the files of true-life ghost hunters, husband and wife Ed and Lorraine Warren. In 1952, the Warrens formed The New England Society of Psychic Research and began to market themselves as ghost hunters and lay demonologists. Ed claimed to have seen ghosts in his family home ever since growing up in Connecticut in the 1930s and introduced Lorraine to her first paranormal experience. During a fifty-year career up until Ed’s death in 2006, they purportedly investigated some 4000 haunted house around the USA and assisted the Catholic Church in exorcisms. They made a living as consultants and lecturers on the subject, producing many supposed photos and videotapes of ghosts, as well as writing several books about their more high-profile cases. Unlike many others, they supported scientific investigation into phenomena and ostensibly attempted to rationally dismiss claims before jumping to conclusions (as we see them doing in one scene in the film).

Their most famous incident was the investigation into the Amityville house in 1977 where they claimed to have produced infra-red photos of ghosts. In that the Amityville incident was later revealed as a hoax by several of its perpetrators, this says all one needs to about the Warrens credibility. (Some excellent pieces debunking the Warrens claims can be found at Swallowing the Camel and Skeptic Blog. The room of artifacts we see in the film is actually an occult museum that the Warrens maintained and charged visitors a fee for tours. (The malevolent doll we encounter in the prologue is part of the museum, although it and its story is more mundane than the one we see portrayed).

Other of the Warrens’ investigations were portrayed in the films The Haunted (1991) and the abovementioned The Haunting in Connecticut, while they acted as demonology consultants on Amityville II: The Possession (1982) and appeared in several documentaries about The Amityville Horror. Lorraine appears as an actual ghost hunter on the reality tv show Paranormal State (2007-11).

Lorraine has stated that the events as dramatised in the film are very different from what happened in actuality. Even if one is to buy into and sccept most of the dubious and distorted facts, outright hoaxes and unscientifically supported assertions that the abovementioned titles derive their ‘based on a true story’ claims from, it is best to approach The Conjuring as a work of fiction even though the film uses the names of the Warrens and actual photos of them and the Perrons over the end credits to reinforce its claims as a true story.

As either a work of fiction or loose fact, The Conjuring feels like a film where its every move has been mapped out a hundred or more times before in the haunted house and possession genres. There are times the script seems on the verge of delving down deeper into something beneath the cliches. It employs ideas put forward by the Warrens that hauntings and cursed objects are a way for demonic entities to enter the world and gain physical presence. It also introduces the stages of possession (claiming only three when the Warrens had five in reality) where the film seems to be heading in search of establishing a rationale behind hauntings and possession. In the end though, they are ideas that never go any further than that and The Conjuring churns away at being yet another horror film by the numbers. There is reference to a witch and a maid who died in the house, while at other times it is said to be a demonic force, but we learn almost nothing about the agency behind the haunting.

That said, James Wan is a fine director with an instinctive understanding of what makes an audience jump. As a result, The Conjuring feels like a film that is plotted entirely by cliches – but at the same time is also very well made from a directorial standpoint. Wan creates constant dread and gets some fine jumps off – the hands emerging from the closet; figures appearing behind people and in the periphery of vision, even jumping off the top of the closet; and especially a scene where Lili Taylor is trapped in the cellar and a voice whispers “Wanna play hide’n’clap” and a pair of hands emerge from out of the dark behind her.

The eventual upshot is that you end up with a film that leaves you constantly feeling that is aiming for far more elevated places, only to disappoint with the routine effort it ends up being on a plot level. Though James Wan has considerable directorial style, even he is unable to allow the climactic exorcism to feel like a scene that goes entirely by the numbers filled with levitations, the possessed person under a layer of makeup mouthing obscenities, the recitation of Latin rites and so on, where all that seems missing is priests chanting “the power of Christ compels you.”