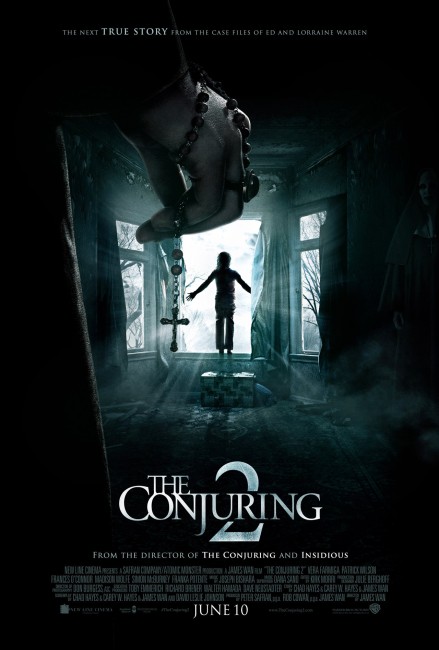 In 1976, Ed and Lorraine Warren are asked to investigate what happened to the Lutz family at the Amityville house. During a seance, Lorraine encounters a demonic nun and has a premonition of Ed’s death. In 1977, in the suburb of Enfield in London, solo mother Peggy Hodgson and her four children experience a series of supernatural occurrences, including moving objects and sinister apparitions. When tv news crews and a parapsychological team are brought in, eleven-year-old Janet speaks with a deep voice that claims to be Bill Wilkins, the previous inhabitant of the house. Having sworn off conducting investigations after being critically attacked on a tv talkshow, the Warrens are persuaded to travel to Enfield by the Catholic Church. During their investigation, they determine that something is indeed in the house, levitating objects and possessing Janet. As their investigation deepens, they realise that there is a far more sinister demonic force in the house.

The Conjuring (2013) was one of the biggest theatrical horror successes in the last few years, earning over $300 million wordwide. Directed by James Wan, who had a sterling reputation in terms of genre material as the director of Saw (2004) and Insidious (2010), among others (see below), it created a genuinely spooky mood that unnerved audiences in a big way. The film was based on the experiences of true-life paranormal investigators and demonologists Ed and Lorraine Warren who claim to have had investigated and fought supernatural forces. The film was such a success that the doll seen in the Warren’s museum at the start of the film was even given its own film with Annabelle (2014), which later spawned two sequels with Annabelle: Creation (2017) and Annabelle Comes Home (2019). With The Conjuring 2, James Wan, joined by Patrick Wilson and Vera Farmiga, returns to make a sequel to the earlier film.

Like The Conjuring, The Conjuring 2 claim to be based on a true story but I have highly sceptical doubts about the claims that the Warrens make. It is important even before we get to a dissemination of what is depicted in The Conjuring 2 that the so-called facts be separated from what the film outrightly invents. In the realm of the basic facts, there was a haunting that supposedly occurred to the Hodgson family in their home in the London suburb of Enfield between 1977 and 1979. There are photos of the family shown over the end credits and there is little doubt that the film has made a scrupulous effort to replicate the look of the house and street, their dress sense and everything right down to the posters on the girls’ walls. With the exception of the casting of Frances O’Connor as the decidedly more frumpy Peggy Hodgson, all of the actors cast look physically like their real-life counterparts. The film replicates many of the numerous psychic occurrences that were reported – noises, moving objects, the police observing a chair moving, the levitations and the possession of the daughter. The film also plays the actual recording of the taped interview with Janet talking in a deep voice over the end credits. The same incident was also depicted from the perspective of the British investigators in the British tv mini-series The Enfield Haunting (2015).

On the other hand, there is that which the film either invents. The Warrens did go to consult at Enfield, although were not the lead investigators (in fact, it is reported by those involved that they only visited for a single day. Perhaps the most damning statement about the Warrens involvement comes from noted sceptical investigator Joe Nickell who, was at one point threatened with violence by Ed Warren after casting doubt on his claims, who said that Ed Warren was “notorious for exaggerating and even making up incidents in such cases, often transforming a haunting case into one of demonic possession”). The Warrens did not drive the demonic forces out of the house in an exorcism that nearly wrecked the house; the only exorcism was far more mundanely conducted by a local priest and the ghostly presence supposedly departed of its own accord some time after.

Many of the other things we see throughout such as a room of crosses turned upside down, the appearance of the Crooked Man or of Janet being teleported from out of a locked room have been invented for the film. There was no secret audio-taped message from Bill Wilkins. The most notable fiction is that while the Warrens did investigate the Amityville incident, there is no story about Lorraine being haunted by a demon nun and having a premonition of Ed’s death (that was not even in the original script for the film and was actually added by James Wan following shooting to flesh out her character and to set things up for the spinoff film The Nun).

Certainly, you have to commend The Conjuring 2 for being faithful to many of the details of the case. The main problem is the balance of its interpretation. The film is certain about the actuality of the supernatural and has no lack of doubt that something happened at either Enfield or Amityville. In reality, both incidents are mired in considerable doubt. Sceptics and investigators conducted a thorough examination of the Enfield Haunting; some believed it was real, others were certain it was a hoax.

One of the most damning arguments in favour of a hoax was the videotape evidence showing Janet throwing things around a room (which is faithfully replicated here, whereupon the film nimbly dodges this by inventing a piece of fiction about the possessing entity forcing Janet to fake it). There has been reasonable doubt placed on many of the things that happened – such as that nobody directly saw any of the items move and tended to suspect they had been picked up by the girls and thrown when people’s backs were turned; that Janet would not produce the voices unless nobody was looking. The girls themselves admitted that they had faked some (but not all) of the apparitions because they felt under pressure from the investigators to have something happen.

On the more credible side, Maurice Gross was certain to have not only seen small objects but heavy items of furniture moving (not something you would easily imagine children capable of throwing about), including an iron fireplace being wrenched out of the wall. One of the more credible accounts is of the police officer who saw a chair levitate several inches off the floor and move, although what exactly was seen varies from account to account and the officer later claimed uncertainty about what they saw. Illusionists who investigated came away certain that there was nothing they saw that could not be explained by trickery, while Anita Gregory (who was a believer in the paranormal) left certain that everything was a hoax. Interviewed in more recent years, Janet is still certain about the actuality of what happened – to her credit, her story still holds up without inconsistencies.

The other major story that is wound in is the story of the Amityville haunting, which is recounted in supposedly true life films The Amityville Horror (1979) and The Amityville Horror (2005), as well as a long line of fictional sequels. This has been proven beyond any reasonable doubt to be a hoax – the claims have been found to be contradictory on multiple accounts; things that been denied by supplementary witnesses who are cited in the book; and everything was later admitted to as being a hoax by the participants. The Warrens swore at the time that the Amityville incident was real and the film depicts everything as though it was. The film also replicates the incident where the Warrens’ claims about the Amityville house were attacked on a tv talkshow by sceptic Stephen Kaplan. What makes the film slip over into a pseudo-scientific interpretation is that we hear none of Kaplan’s quite reasonable reasons as to why the Amityville Horror was a hoax but rather we get Ed turning on Kaplan and questioning his doctoral credentials – in other words, a good old ad hominem dismissal of the content of the message by an attack on the bearer’s credibility. That this is the sole rebuttal the film chooses to offer from the Warren camp seems highly disappointing.

The other thing that seems unpalatable to me is how this is now much more of a Christian (ie. Catholic) film this is than the first The Conjuring was. Lorraine was a Catholic and believed that hauntings were caused by demonic activity. In other words, to accept the credibility of the Warrens claims you are logically required to accept a belief in the actuality of the Catholic Church and its claim to be the voice of authority on matters of the supernatural. I do not and as a result everything that follows, which is seen through the filter of that interpretation, should be regarded with a healthy scepticism.

It is entirely possible to switch off and regard The Conjuring films as works of fiction. Many have, although my concern is that audiences go away in the belief that the films represent an accurate depiction of true-life events – such as that the Warrens were admired and dedicated investigators when the reality is that they never offered proof of any of their claims and many of these were self-aggrandising. I won’t go so far as to call the Warrens frauds – that is to say were telling lies and did not believe what they claimed – but certainly they were more than happy to exaggerate or at the very least interpret ambiguous things as evidence.

The second more dangerous aspect is that the films by their very ‘based on a true story’ claims fool the unsuspecting into believing that they depict an actuality of the supernatural, good and evil, the afterlife, the existence of demonic forces and advocate for a Catholic/Christian interpretation of the universe. There is no crime in believing any of these but when people accept their reality based on a fiction or non-existent claims and with no sceptical questions asked, you have a right to be concerned.

All of that said, if you can tune these things out, James Wan delivers a fine and genuinely bone-rattling show. He has an expertise in delivering scares that is not matched by anyone else at work in the genre. Time after time he causes the audience to jump out of their seats with the appearance of the ghostly figure behind people’s shoulders, girls talking in deep voices, objects moving, a magic lantern shadow figure that feels like too much of an acknowledgement of inspiration to The Babadook (2014) stalking through the house, and an especially unsettling scene where Vera Farmiga sees the ghost nun’s shadow walk around a room and then take possession of the painting. The fact that many of these scares are often well worn ones and that Wan manages to deliver them anew with a great deal of intensity is all to his credit.

The Nun (2018) was a spinoff from this film featuring the demonically-possessed nun that Lorraine sees in her visions.

(Nominee for Best Director (James Wan) at this site’s Best of 2016 Awards).