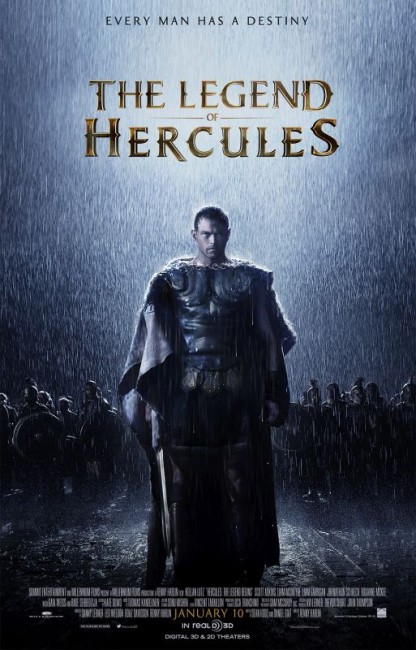 As King Amphytrion of Tiryns invades Argos and defeats its king in hand-to-hand combat, his wife Alcmene prays to Hera to stop his tyranny. She is told by an oracle that she will be visited by Zeus. That night, Zeus appears to Alcmene as a mighty wind and makes love to her. She is discovered in the throes of passion by Amphytrion but he is puzzled at being unable to find anyone else in the room. Not long after, she gives birth to a son that she names Alcides, although secretly gives him the true name of Hercules. Growing up into a young man, Hercules loves Hebe, the princess of Crete, only for Amphytrion, who despises Hercules, to announce that Hebe will be married to his first son Iphicles. She and Hercules try to run away together but are recaptured. Amphytrion sends Hercules on a military mission to Egypt, only to have a troupe of soldiers waiting to kill them. Thought dead back in Tiryns, Hercules and his friend Sotiris are sold into slavery. There Hercules discovers himself as a mighty pit fighter. As he comes into his true strength, Hercules struggles to win his freedom and to return to Tiryns to claim his beloved and kill his stepfather before the wedding takes place.

The Greek myth of Hercules has a long tradition on film beginning with the Steve Reeves Hercules (1958). This became a huge box-office success thanks to US promoter Joseph E. Levine and gave birth to a massive number of Italian-made copycats cast with muscle-builders (the actual number of Hercules films made during this so-called peplum cycle is innumerable). Variants go all the way to overt parodies of the cycle such as Hercules in New York (1970) and Hercules Returns (1993) to the extremely bad Hercules (1983), Disney’s animated version Hercules (1997) and spoofily enjoyable tv series Hercules: The Legendary Journeys (1994-9), among many others.

Surprisingly, Greek myth has only been sporadically touched on in the 00s fantasy revival. There have been the Hallmark tv mini-series’ Jason and the Argonauts (2000) and Hercules (2005) and, more recently, cinematic spectaculars like Clash of the Titans (2010) and Immortals (2011), or modern-day reworkings such as the Percy Jackson films. 2014 however suddenly seemed to herald a revival of the Hercules film with The Legend of Hercules here and Hercules (2014) from Brett Ratner with Dwayne Johnson in the title role, while The Asylum made their inevitable low-budget mockbuster version Hercules Reborn (2014).

Renny Harlin is someone who should be on anybody’s list of bad directors. The Finnish born Harlin first appeared in the US with his third and fourth films, Prison (1987) and A Nightmare on Elm Street IV: The Dream Master (1988), and then gained a modest degree of respectability with Die Hard 2 (1990). Throughout the 1990s, Harlin made his name on loud and mindlessly spectacular action films like Cliffhanger (1993), CutThroat Island (1995), The Long Kiss Goodnight (1996) and Driven (2001). The last three in particular were box-office flops. Towards the end of the decade and into the millennium, Harlin seemed to demonstrate a predilection for genre material with the likes of the ridiculously entertaining killer shark movie Deep Blue Sea (1999), the universally derided Exorcist: The Beginning (2004), the serial killer thriller Mindhunters (2004) and the supernatural horror The Covenant (2006). None of these are very good films. Indeed, it could be observed that the opportunities when Renny Harlin deliberately sets out to make a bad film – The Adventures of Ford Fairlane (1990) and Deep Blue Sea – are far more enjoyable than the films he takes seriously.

Not too unexpectedly, The Legend of Hercules falls into typical Renny Harlin territory within minutes. It feels like a film that has inhaled far too many viewings of 300 (2007). (300 should not be included along with the abovelisted Greek myth fantasies but seen more as a film that turns Greek history into fantasy). As a result, Renny Harlin – a director who is all empty-headed flash and no content – has reduced Greek myth to a series of hyper-realised poses. The whole film consists of sweeping cliche shots of digitally-created armies and sped up/slowed down combat scenes between muscular half-clad men.

Renny Harlin often likes to cast pretty boys in his films – something that was at its worst in The Covenant. In this case, he has Kellan Lutz, a former fashion model and one of the Twilight series regulars. Lutz plays the part with his body so steroidally pumped that it looks as though a pin-up of his pretty face has been plastered onto a bull’s neck popping with veins so thick it could be used as industrial cable. Needless to say, Lutz goes through the entire film demonstrating no acting ability other than a smirk and the assurance that he is the prettiest person on the screen.

I must admit to scratching my head as to what Renny Harlin was doing with The Legend of Hercules. The film makes the claim to be telling the origin story of Hercules. Harlin seems to be doing what we saw in Immortals and especially Troy (2004) – giving us a Greek myth with the fantasy elements stripped down and, for the most part, played as a realist story. In the opening scenes, we get Zeus (who is not otherwise portrayed throughout) appearing as a wind to impregnate Roxanne McKee – the image of her wrestling beneath the sheets pretending to make love to the wind looks about as silly as it sounds.

The bulk of the story is made up of the usual cliche betrayals from the throne/siblings, of the hero thrown into slavery and/or the arena to fight and having to make his way back to challenge the cruel despot that put him there and, in the process, discover who his true father (and even name) is. All of this is tried and familiar material from anybody who has seen Conan the Barbarian (1982) onwards.

Hercules is bereft of any of his classic Twelve Labors, apart from the encounter with the Nemean Lion – but this is merely a large digitally created lion that Kellan Lutz and Liam Garrigan come across at random in the woods, which earns the exclamation “Oh look, it’s the Nemean Lion,” whereupon Hercules promptly wrestles and kills it.

The Legend of Hercules finally slips into fantasy at the end. There are two rather cool scenes that Renny Harlin pulls off – one where Hercules is chained up to a set of pillars Samson-style but succeeds in pulling his restraints out and then swinging large chucks of masonry around at the end of his chains downing opponents by the dozens. The other is the scene where Hercules and his rebel army come to the gates of the palace, Hercules cries out for aid from Zeus and a lightning bolt comes down from the heavens and strikes his sword and he sweeps it around wielding the lightning bolt as an electric whip to wipe out the entire opposing army.

Two reasonably cool sequences however don’t excuse a film with a braindead pretty boy lead and made up of empty-headed poses in lieu of anything of substance, least of all a story that has been culled by compounding a maximum number of cliches. Even the end of the film comes abruptly where one minute Hercules’ love Hebe (Gaia Weiss) is dying and in the next scene she is inexplicably alive, he has been crowned the king and they are having a baby.