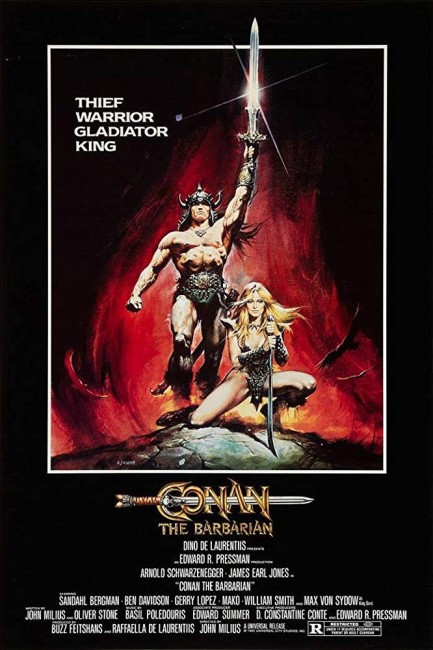 Thulsa Doom, evil ruler of the snake cult of Set, raids a Cimmerian village, decimating most of the populace and selling the rest into slavery, including young Conan. Conan grows up as powerfully built man and is trained as a fighter, before being granted his freedom. Joined by the thief Valeria, who becomes his lover, and the archer Subotai, Conan conducts an outrageous robbery of one of the cult’s temples in Shadizar. This brings them to the attention of the king who hires them to rescue his daughter from the clutches of the Set cult. This provides Conan with the chance to come up against Thulsa Doom again and avenge the murder of his parents.

The character of Conan the Barbarian was a creation of author Robert E. Howard (1906-36). With his stirring and full-blooded writing, Robert E. Howard became one of the finest pulp adventure writers of the early 1930s. Conan the Barbarian was the most popular of several larger-than-life heroes invented by Howard. Howard’s Conan stories reveled in a primal red-bloodedness – Conan is a Nietzschean superman who defies all morality and operates on pure instinct. Conan appeared in twenty stories and one novel published between 1932 and 1936, mostly in Weird Tales magazine. (Although, there have been a substantial number of other authors completing unfinished fragments of Robert E. Howard’s work following his death, as well as adding original works, and a popular Marvel comic-book that began in 1970).

Robert E. Howard himself was a figure who seemed almost the antithesis of his work – he spent almost the entirety of his life in the small town of Cross Plains, Texas. His correspondence was voluminous and reveals a man who was caught between introversion, phobia and social isolation on one hand – some of his ideas were plain weird – and of dreaming of being a larger than life figure on the other. Sadly, Howard committed suicide in 1936 at the age of 30 by self-inflicted gunshot wound, unable to bear life after the death of the mother to whom he was overly attached to. [A portrait of Robert E. Howard’s life is dramatised in the romantic film The Whole Wide World (1996)].

It is with perhaps some irony that an individual whose life appears to have been closeted can create a character that has become an archetype of hyper-masculinity. Indeed, Robert E. Howard’s work single-handedly inspired its own genre – something that became known as ‘sword-and-sorcery’. (The definition of sword-and-sorcery is loose – it is heroic fantasy adventure set in mythical lands. Robert E. Howard’s work falls into it; J.R.R. Tolkien does not but many Tolkien imitators do. One suspects that the real meaning of sword and sorcery is simply that of pulp fantasy that has no higher aspirations than telling adventure tales).

A film adaptation of Conan had been planned for a number of years. Arnold Schwarzenegger signed on from the point of his success as Mr Universe and as the star of the documentary Pumping Iron (1975). Indeed, Conan the Barbarian was the film that propelled Arnold Schwarzenegger to fame as an actor and action superstar.

The director was John Milius, who had made films such as Dillinger (1973), the adventure film The Wind and the Lion (1975), the surfing film Big Wednesday (1978) and would go onto make the ridiculous USSR invades the USA film Red Dawn (1984). John Milius is a director not unakin to Robert E. Howard himself – all his films concern themselves with primal red-blooded masculine rites of passage.

John Milius and Oliver Stone take erratically from Robert E. Howard – Valeria was a character in the story Red Nails (1936) but effectively becomes Bêlit, Conan’s pirate queen lover from The Queen of the Black Coast (1978); Thulsa Doom is based on Conan’s continuing nemesis, the Stygian sorcerer Thoth-Amon but is now named after a character from Howard’s King Kull stories. The script is a patchwork of elements from various stories – the crucifixion of Conan from A Witch Shall be Born (1936) and the substance of the story The Thing in the Crypt (1967) (which is in fact comes from a Conan pastiche story by L. Sprague de Camp and Lin Carter).

At least, John Milius gets the raw, barbarian primality of Robert E. Howard’s writing right, be it a body count approaching somewhere near that of World War II, Basil Pouledoris’s Wagnerian score or the ponderous Nietzchian quotes, which are all wound together in the service of Milius’s machismo-fired brand of modern cinema heroism. The story’s length is slow at times, particularly the first half, which seems told entirely in lap dissolves.

There are odd pieces that seem out of place such as James Earl Jones’s transformation into a snake where the film seems to be trying to jump on the then air-bladder makeup effects trend begun with The Howling (1980) and An American Werewolf in London (1981). Milius also seems uncomfortable with the fantasy elements – the appearances of a witch and the likes are isolated, as opposed to Howard where they are fully integrated with Conan taking on demons and monsters in full combat with regular regard. However, a number of Milius’s directorial sequences – the dreamy slow-motion beheading of Conan’s mother at the beginning and the long silent slow motion killing of Thulsa Doom and the turning away of his followers at the end – are vivid and striking.

Some of the performances let the film down – Arnold Schwarzenegger in particular. Schwarzenegger is without the sense of self-deflating humour he would later develop and his thick accent makes lines like “Crom, grant me revenge! And if you do not listen, then to Hell with you,” or “What is good in life, Conan?” “To crush your enemies, to see them driven before you, and to hear the lamentations of their women,” come out funny.

Dancer Sandahl Bergman garnered a good deal of attention for her part (her first talking role on film), although she never subsequently went onto find the stardom some people seemed to think she was eminently capable of doing and languished in B movie roles. She is not bad, particularly when she moves, but when she opens her mouth, the New York accent grates. James Earl Jones, then mostly known as the voice of Darth Vader, makes a powerful and imposing presence, with the film gaining much from his deep, baritone voice and curious blankness of face.

The sequel was Conan the Destroyer (1984), also featuring Arnold Schwarzenegger, where the violence was toned down and the action present in a comic-book tone. A third Conan film was toyed with for a number of years, before a revival was eventually made with the dismal Conan the Barbarian (2011) starring Jason Momoa. Other Conan works include Conan the Adventurer (1992) and Conan and the Young Warriors (1994), two animated tv series that reduced Conan to a teenage adventurer and were severely lacking in any Howard-esque red-bloodedness; and a terrible short-lived live-action German-made tv series Conan (1997-8), which attempted to exploit the televised sword-and-sorcery trend begun with Hercules: The Legendary Journeys (1995-9), where Conan was played by Ralf Moeller. Conan the Barbarian was also parodied in The Colour of Magic (2008).

Other Robert E. Howard film adaptations are:– Red Sonja (1985), featuring Brigitte Nielsen as Howard’s larger-than-life female warrior and Arnold Schwarzenegger as a different character; Kull the Conqueror (1997), Solomon Kane (2009) and the animated Red Sonja, Queen of Plagues (2016). There has also been an announced adaptation of Brak Mak Morn and a long announced remake of Red Sonja.