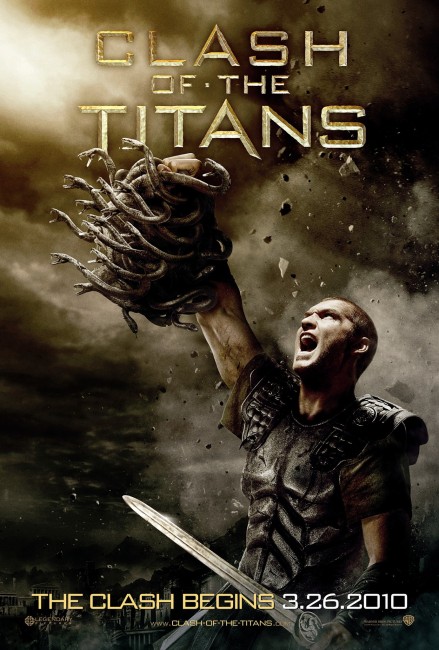 The fisherman Spyros finds a young child and its mother at sea in a coffin. He adopts them as his family, naming the boy Perseus. Perseus grows into manhood. As they near the city of Argos in their boat, they witness the angry locals throwing a statue of Zeus off the cliff, declaring war on the gods. In revenge, Hades, god of the underworld, manifests and attacks them – but this also sinks the boat, killing Spyros and Perseus’s mother. Back on Mount Olympus, Hades pleads with Zeus for the chance to teach the people of Argos a lesson. Rescued and taken before the king, Perseus is witness as the queen Cassiopeia idly boasts that her daughter Andromeda is more beautiful than Aphrodite. Hades appears and promises that within ten days he will unleash the Kraken to destroy Argos for their arrogance, unless Andromeda is sacrificed to it. It is discovered during this that Perseus is a demi-god, birthed of a mortal and a god, which is as much a surprise to him as they. The Argosians believe that he can find a means of stopping the Kraken. Joined by a company of soldiers, Perseus sets out on a quest to find the Stygian Witches and then on to confront The Medusa. All the while, Hades secretly plots against Zeus and sends his agent, the half-human Calibos, to kill Perseus.

Clash of the Titans (1981) was a reasonable hit in the fantasy cycle of the early 1980s. It was the last film made by Ray Harryhausen before he went into retirement. It was also the last showcase film in the stop-motion animated tradition that Harryhausen had made an art form, before such effects became supplanted by Industrial Light and Magic and later the CGI revolution. I am not convinced that Clash of the Titans was a great film – certainly, Ray Harryhausen produced far better works such as The 7th Voyage of Sinbad (1958), Jason and the Argonauts (1963) and The Golden Voyage of Sinbad (1973) – but it clearly stuck in the imaginations of some people as children, enough to inspire this remake.

Clash of the Titans 2010 seems to sit astride a cannily calculated series of coinciding box-office fads. First, there is the 80s culture revival fad that has seen other heroes of that decade revived in the last couple of years – Indiana Jones, Superman, Rambo, Rocky, the Men in Black, Conan the Barbarian, John McClane in Live Free or Die Hard (2007) and A Good Day to Die Hard (2013) and the Ghostbusters. Secondly, there is the fad for epic fantasy that became massive box-office after The Lord of the Rings and The Chronicles of Narnia.

The third fad was the one for 3-D. Well, actually, no – Clash of the Titans 2010 is a fake 3-D film. Clash of the Titans was in fact shot in 2-D but after the massive box-office success of Avatar (2009) three months earlier (and also starring Sam Worthington), it was hurriedly digitally touched up in post-production to be released in 3-D too. You can only have disdain for a film that so desperate to climb aboard a box-office fad that it goes to great lengths to pass itself off as part of as something that it is not. What the studio does not seem to understand is that Avatar worked because it was designed for 3-D with James Cameron using the extra dimension to give his world living, breathing life; Clash of the Titans 2010 merely thinks it can pass as the same thing by slapping the 3-D label on itself and letting audience see something that was designed flat through 3-D glasses. In contempt for such thinking (not to mention a refusal to pay over-hyped prices for 3-D tickets), I made a point of searching out a theatre in town that was showing Clash of the Titans in 2-D and went to see it the way it was intended to be shown.

The remake makes a number of changes to the original. Most of the basics are still there – Perseus, Andromeda about to be sacrificed to the Kraken after her mother makes an idle boast comparing her beauty to the gods, the three witches with one eye between them, The Medusa, Perseus’s tamed pegasus, the climactic confrontation with the Kraken. The remake also rearranges several of these pieces. It drops the long preamble where Perseus attempts to solve the riddle and become Andromeda’s suitor by following her sleeping doppelganger as it is taken to Calibos each night; in fact, this Perseus fails to even demonstrate romantic interest in Andromeda. Cassiopeia’s boast about Andromeda’s beauty and the curse she brings down is moved from the middle of the film to near the start.

There are several new characters in Io, who replaces Andromeda as love interest; the mysterious djinn, one of whom joins the party; as well as Hades who is present to give the story a villain. Calibos is there but has been substantially altered to now become a vassal of Hades charged with trying to kill Perseus throughout, as well as a backstory about his being the husband of Perseus’s mother. The mechanical owl Bubo, one of the more ridiculed aspects of the original, is dropped apart from one scene where Sam Worthington is being outfitted for his mission and picks the owl up, asking “What is this?” Also written out is the character of Perseus’s trainer Ammon, played by Burgess Meredith.

The remake tightens the plot somewhat, turning Perseus into a more psychologically complex hero, showing him driven by a desire for vengeance against the gods for the death of his family and determined to succeed by mortal means. Also added is a plot about humanity’s rebellion against the gods and the gods’ determination to make them pay, which replaces the original where everything seemed driven by the whimsy of fickle gods.

The remake is conducted by Louis Leterrier, the French director who made Unleashed (2005) and Transporter 2 (2005) for Luc Besson, before coming to the US to make The Incredible Hulk (2008). Leterrier stages the action and effects sequences with an epical flourish. The one thing that the remake can offer the original is nearly thirty years improvement in visual effects technology. Even by 1981 standards, the stop-motion animated effects, which Ray Harryhausen had been conducting since the 1950s, were starting to look creaky.

The remake employs several visual effects houses to reimagine these on an epic scale. The major set-pieces are still the same ones from the original – the venture into The Medusa’s lair and the climactic battle with the Kraken. The Kraken climax, which ups the size of the original creature by a factor of about 100, is suitably impressive. However, the effects in the Medusa sequence are decidedly weak with she looking only like a creature out of some fantasy computer game. One sequence the remake oddly chooses to embellish is the one where the scorpions come to life, which was a minor set-piece in the original but is far more dynamically staged here. The remake also throws in an attack by harpies borrowed out of Ray Harryhausen’s Jason and the Argonauts, to which one can only say the original was infinitely the superior.

I don’t think the original Clash of the Titans is a great film but it feels more authentic in its fantasy than what we have here. The remake clearly has had much lavished on it in terms of effects, design and budget, but it feels strangely without enervation. Most of the time, it feels like it has been conceived around its special effects sequences and with many other considerations, like the characters, taking a backseat role. The original was conceived around the effects sequences too but there at least the plot was original and the world it was set in imaginative. If the sole reason to conduct a remake is to improve the special effects then this surely seems to miss the point of a film.

More to the point, the original came at a point when effects magic still held an awe for audiences, whereas nowadays we live in the realm of the routinely fantastic and the effects here amount to no more than pretty candy. As such, Clash of the Titans 2010 passes by without seeming to make itself felt. It seems more busy racing from set-piece to set-piece than it ever dramatically engages; it feels frenetic more than it ever lets the adrenal glad kick in; while it only poses at heroic cliches rather than stirs any heroic triumph on an emotional level.

Clash of the Titans 2010 was Sam Worthington’s third leading role in a big visual effects genre vehicle within the space of a year, following Terminator Salvation (2009) and Avatar. In all of these roles, Sam Worthington seems flat and inexpressive. Despite his apparent popularity, one has still yet to find any distinguishing note in Worthington’s performance and cannot help but wonder just what it is that makes him such a fashionable name.

Elsewhere, the remake brings together an impressive name cast but gives most of them – particularly those playing the other gods – very little to do, with some not even getting speaking parts. Gemma Arterton radiates exquisite beauty but little else – the scene where she tries to show Sam Worthington how to handle the Medusa, which segues into a love scene, is awkward and contrived. The one who does shine is Ralph Fiennes, clearly still in Lord Voldemort phase, who gives a magnificently theatrical performance as Hades.

Sam Worthington, Liam Neeson and Ralph Fiennes returned with the sequel Wrath of the Titans (2012).

Louis Leterrier subsequently went onto make Now You See Me (2013) about a group of bank-robbing magicians, the spy comedy The Brothers Grimsby (2016) and the tv series The Dark Crystal: Age of Resistance (2019).