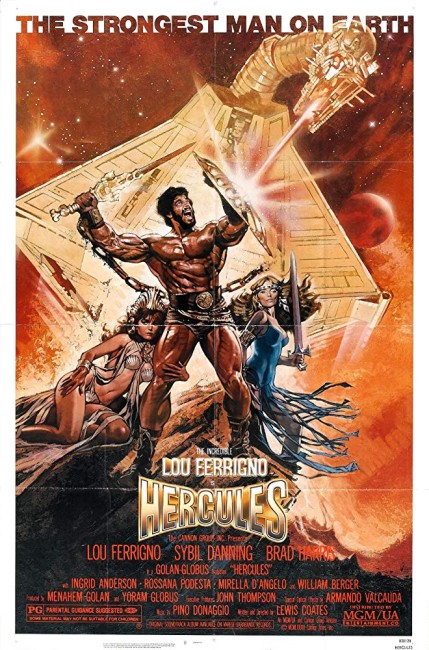 From Mount Olympus on the Moon, the gods decide to test the worthiness of man. The baby Hercules is born as the son of King Augius. Augius is then usurped by Minos, the captain of his guards, and his daughter Arianna. Zeus intervenes to save the baby Hercules as he is left floating down a river. Hercules is then found by a couple and grows up into a powerfully muscled adult. He becomes bodyguard of the Princess Cassiopeia and falls in love with her. When Cassiopeia is kidnapped by Arianna, Hercules must undertake a journey to rescue her. This takes him to the island of the sorceress Circe, the lake of Hades and finally the land of Atlantis.

This is a loose remake of the Steve Reeves beefcake classic Hercules (1958). The Steve Reeves Hercules inspired the Italian peplum cycle (1959-65), nicknamed the ‘sword and sandal’ genre in the West, featuring bodybuilders in po-faced heroics. There were an enormous number of imitators and films featuring other mythological bodybuilder heroes throughout the 1960s.

This Hercules comes inspired by the Star Wars (1977) science-fiction boom. Now the story of Hercules has been redrafted as a quasi-science-fiction film. The results are bizarre to say the least. Olympus is now located on the Moon; instead of the three-headed dog Cerberus, Hades is guarded by giant robots and so on. Mythology is randomly cobbled throughout – in Greek tradition, Daedalus was a mortal who created a pair of wings that melted when he tried to fly too close to the sun (a neat demonstration of human hubris) but here Daedalus has become a female god and the creator of the giant robots that turn up throughout; in Greek myth, Pandora was created as a perfect woman by the gods but was drawn by curiosity to open a jar that then unleashed many of the ills of mankind, here the shattering of her jar is what created the universe; and with a Minos one would have at least reasonably expected a minotaur or even a labyrinth but here he is merely the usurper of the throne; and similarly, though Circe appears, she fails to weave her shape-changing magic.

Certainly, this Hercules is far more fantastical than most of the sword and sandal films from the 1960s ever were. However, the larger-than-life exploits, all served up in straight-face – Hercules tossing a bear into orbit whereupon it becomes the constellation Ursa Major, or his flying by tying a rock to his chariot and throwing it – are laughable and utterly lacking in any conviction. The special effects are extremely cheap looking. The one good aspect of the film is the highly imaginative production design – with Hades like a giant skull rising up out of a lake of fire, the sphinx-like stables and the magnificent sets for Atlantis and Cassiopeia’s cell.

Hercules starred former Mr Universe Lou Ferrigno who had come to fame as the green-skinned title character in the tv series The Incredible Hulk (1977-81). After the series ended, Ferrigno found brief employ in bad Italian fantasy films such as this and its sequel, The Seven Magnificent Gladiators (1985) and Sinbad of the Seven Seas (1989). From these, it is clear to see why The Incredible Hulk was the peak of Lou Ferrigno’s career where all he had to do was be painted green and growl. Required to actually open his mouth and speak here, he seems barely able to enunciate.

Opposite Ferrigno is the perpetually awful Sybil Danning, who some people are convinced is a cult queen. Danning is at least the only one with any sense and hams it up. Surprisingly, she gets second billing but is not the heroine and spends a minimal amount of time on screen (this reportedly being because she and Lou Ferrigno did not get on and her role was reduced as a result).

The sequel, which reunited director Luigi Cozzi, Lou Ferrigno and bad guy William Berger, was The Adventures of Hercules (1985).

Although Italian-made, Hercules was financed by Golan-Globus, the Israeli producers of the Lemon Popsicle films and a stack of Chuck Norris action vehicles throughout the 1980s. Luigi Cozzi, who usually Anglicizes his name as Lewis Coates, is a regular director of cheap Italian genre films. Cozzi began as an assistant director and co-writer to Dario Argento. He also directed Star Crash (1978) and Alien Contamination (1980), two enterprisingly cheap ripoffs of respectively Star Wars and Alien (1979); the giallos Paganini Horror (1989) and The Black Cat (1990), as well as several documentaries about Argento.