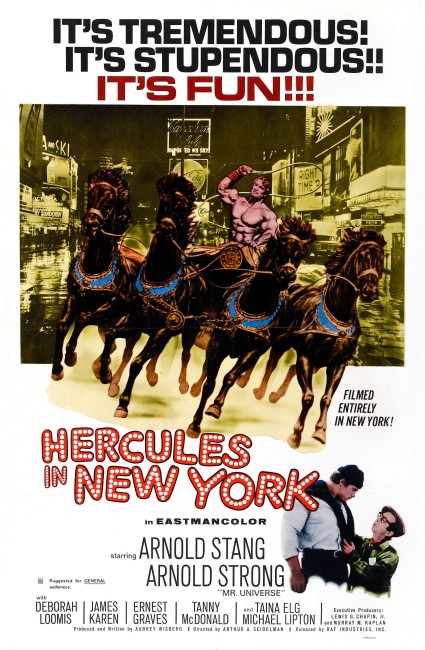 Up on Mount Olympus, Zeus becomes tired of his son Hercules’ arrogance and banishes him to Earth. Hercules arrives in New York City where he befriends a nerdish dock vendor Pretzi and falls for the lovely Helen Campden. They need money so Pretzi enters Hercules in the world of professional wrestling where his super-strength and invulnerability make him a natural. Back on Olympus, Zeus is angered at the disgrace Hercules is bringing to the gods and decides to further punish him by removing his powers. As a mortal, Hercules must not only win the World’s Strongest Man competition but face off against the Mob.

The idea of a satire on the Italian peplum cycle is welcome one. The peplum or sword and sandal film gained its popularity in the 1960s after the success of Hercules (1958) with Steve Reeves, which produced a great many Hercules and other quasi-mythological films featuring other muscleman. However, such a parody would not be forthcoming from this film.

Hercules in New York does have the odd moments of humour – like the portrayal of Mount Olympus as a country tennis club – and the odd exchange of dialogue: “Bucks? Dough? What is this talk about male and female zoological animals?” Unfortunately, all satire and humour is killed dead by the flat, monotonous and torpid pacing, the blank dialogue and the cast’s uniformly dead delivery – the Gods of Olympus all have New York accents, for instance.

Most unconvincing of all is Arnold Schwarzenegger – in his first ever film role where he is billed as Arnold Strong. Schwarzenegger was still a few years away from coming to fame in the documentary Pumping Iron (1975) and making it as an actor in Conan the Barbarian (1982), let alone as an action star and the Governor of California. Schwarzenegger spends most of the film taking off his shirt for no apparent reason. Most laughably unconvincing of all is seeing him speaking normal English – one has become so used to the trademark thick Arnie Teutonic accent and wisecracks that listening to him dubbed straight automatically seem bogus.

Arthur Allan Seidelman later went onto direct much tv, as well as to make The Caller (1988), an intriguing psycho-thriller with a surprise science-fiction twist, the horror film The People Across the Lake (tv movie, 1998), the Arthur C. Clarke adaptation Trapped in Space (tv movie, 1994) and a musical version of A Christmas Carol (tv movie, 2004).