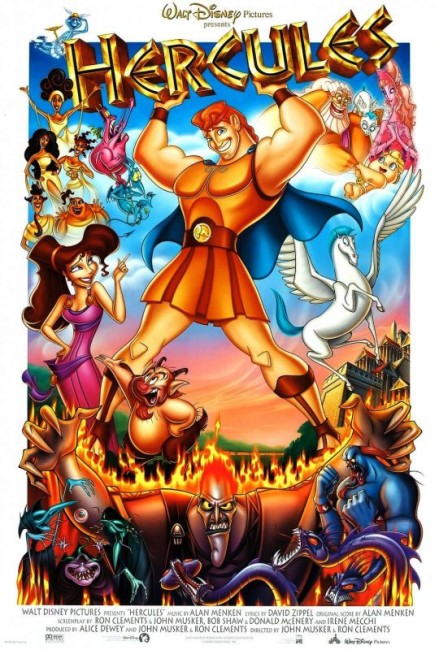 On Mount Olympus, Zeus and Hera give birth to a baby son, whom they name Hercules. Hades, lord of the underworld, is jealous and contrives to feed Hercules a baby bottle filled with an elixir that robs him of his godhood and turns him into an ordinary mortal. However, the bottle is broken and Hercules does not drink the last drop and thus retains his super-strength. He is found and adopted by two humans. As he grows up amongst mortals, Hercules is ostracised because his bumbling and super-strength cause disaster wherever he goes. Zeus tells Hercules that to return to Mount Olympus he must earn back his godhood. He sends Hercules to the satyr Philoctetes, or Phil as he prefers to be known, who specialises in training heroes. Phil puts Hercules through a rigorous regime. Meanwhile, the scheming Hades plots to place various traps in Hercules’ path to cause him to fail.

Hercules was one of the films to come out of the 1990s Disney animation renaissance that began with Beauty and the Beast (1991). Hercules was made by the directing team of John Musker and Ron Clements, who had previously worked on the great and underrated The Great Mouse Detective (1986) and then paired as a directing team on Disney hits like The Little Mermaid (1989) and Aladdin (1992), as subsequent to this with Treasure Planet (2002), The Princess and the Frog (2009) and Moana (2016). Amid the modern Disney renaissance, Musker and Clements’ films tend to take a more unserious attitude towards their source material than any others, usually dragging the films down by riddling them with an irritating barrage of contemporary and pop culture in-references.

You get a sinking feeling about where Hercules going is within the first few minutes when the epic-styled narration by Charlton Heston is interrupted by someone saying: “You’re making it sound like a Greek tragedy. Lighten up, dude.” In no time at all, Hercules travels down exactly the path that one expected it would.

No denying, a reasonable percentage of the Hercules story from the Greek myths is there on screen and Hercules is certainly more faithful to the original stories than Hercules: The Legendary Journeys (1994-9), the Kevin Sorbo tv series that came out around the same time, was. However, in Musker and Clements’ hand, the Greek myth has been subjugated to the familiar Disney animated formula – the story of Hercules now comes with the addition of bumbling sidekicks, songs and a happy ending where people who die don’t die for real by dint of the fact that they are the good guys, while Hercules is now less a hero than a standard Disney callow youth who must learn life lessons.

That in itself would not even be so bad. What kills Hercules is Musker and Clements’ relentlessly modernist approach. This is something that frequently gets in the way of the suspension of disbelief. What we now have is not even so much ‘Hercules the Animated Film’ but ‘Hercules the Cabaret Show’. The film is overrun by in-jokes, anachronistic colloquialisms and modern cultural in-references – it is exactly the same throw-everything-at-the-audience anything-for-a-laugh approach and barrage of audience asides that comes from a cabaret act. The worst part is surely when the film starts doing a parody on merchandising tie-ins – something that might be amusing did it not come from the most heavily merchandised film of the year, in which case it becomes ludicrously hypocritical.

Hercules made a great deal of money and was the seventeenth most popular film of 1997 at the box-office. One cannot help seeing it as a vulgarisation of the great Disney tradition. The Disney animated tradition that began in 1937 fell heavily into neglect in the 1970s and 80s but was successfully revived in the 1990s with the likes of Beauty and the Beast and Aladdin. While the films of the modern Disney renaissance are undeniably impressive in the technical quality of the animation, there is much that has crept into the formula – an insistence of toeing Politically Correct lines, an annoying tendency toward contemporary cultural in-jokes and references – that weakens many of the films.

Hercules is not as bad as Musker and Clements’ Aladdin. Even if it employs the same angular artistic style as Aladdin (designed by British satirical cartoonist Gerald Scarfe), Hercules feels less mechanical and the story works reasonably well, particularly in the second half. Danny DeVito’s satyr is undeniably charming, much more so than Robin Williams’s Genie who was allowed to completely take over Aladdin.

However, if one compares Hercules‘ gag-heavy approach to any of the classic Disney films of the 1940s – Snow White and the Seven Dwarfs (1937), Fantasia (1940), Pinocchio (1940), Dumbo (1941), Bambi (1942) – it pales in their shadow. The classics may lack the epic technical flourishes of the modern Disney films but they had a soft beauty that invariably awes and catches the tear duct. Most importantly, they could tell a story without the need to not take it seriously – and that is the crucial difference.