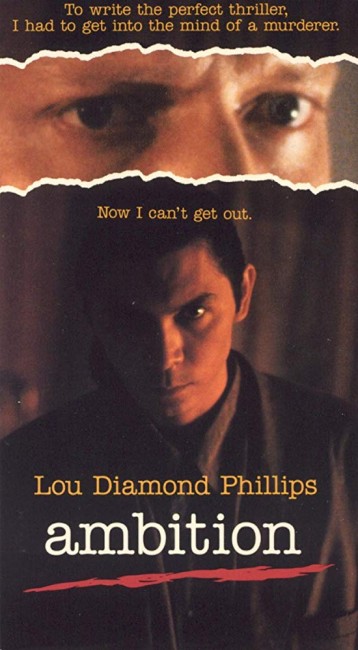 Bookstore owner Mitchell Osgood is a would-be writer of frustrated ambitions. He becomes fascinated with The Valentine’s Day Killer, Albert Merrick, who is about be paroled. He offers to write Merrick’s story but Merrick declines. Mitchell then offers Merrick a job in his store and befriends him. However, this is a ruse and Mitchell secretly substitutes the pills that control Merrick’s behaviour for baking powder with the intent of sending Merrick off the deep end again and then writing a book about it.

Ambition is a halfway interesting film. Written by its star Lou Diamond Phillips, it promises to be a study in unhealthy relationships and pathological obsessions. Alas, it never gets as interesting as you feel it should.

Lou Diamond Phillips winds the plot up toward the end but director Scott D. Goldstein never gets in there with him and gives the film the necessary obsessiveness. Part of the problem is Phillips himself in the lead role who gives too cocksure and too bland a performance – one never sees the Machiavellian intent inside him, he is just another former teen star who hasn’t gotten beyond the fact that he doesn’t have a fan following anymore.

There is a far better performance from Clancy Brown who does a fine job in suggesting the honest, slow-witted killer trying to keep control on his feelings and do the decent thing. The itself film rarely amounts to much.

Scott D. Goldstein has only directed two other films with the non-genre comedy Walls of Glass (1985) and the angel film Levitation (1997)