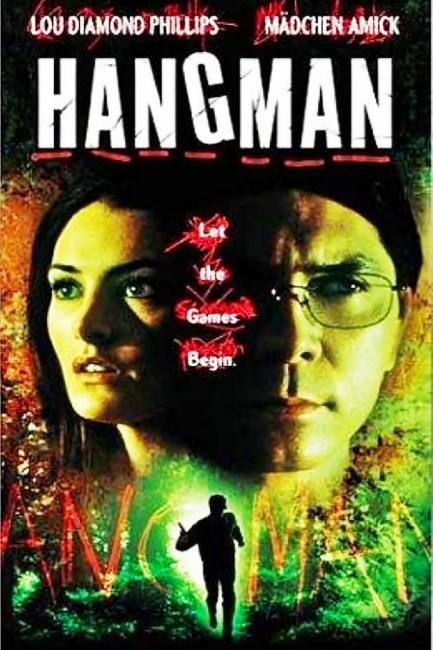 Police detective Nick Roos is called to investigate a murder and finds that the scene mimics a series of killings he investigated that were nicknamed the Hangman Killings. He is startled to find the phrase ‘hypocrite’ written on the soles of the victim’s shoes – a phrase that he failed to guess in a game of internet Hangman several days ago. The victim was found in the house of former psychiatrist Grace Mitchell. She is taken into custody but then the killer starts to challenge the police to further games of Hangman, which require Grace to be a participant. As Roos investigates further, he finds that the victims are in some way related to a love affair in Grace’s past and her strained relationship with her stepfather, who is also a psychiatrist. Evidence leads to Paul Jarvis, a man that Grace used to be involved with and who has become obsessed with her. Everything points to Jarvis being the guilty party before the police find evidence that means that Jarvis could not possibly be doing the killings.

Hangman is a serial killer thriller that harkens back to Basic Instinct (1992) – both nominally share the central premise of a detective becoming involved with an ambiguous femme fatale who is a suspect at the centre of a series of killings. Although in Hangman there is none of the heated sexuality or the relationship between detective and suspect that there was in Basic Instinct.

Moreover, Hangman has a sufficient degree of originality that lets it stand on its own. Indeed, it has an entertainingly contorted plot and the pleasure of the film comes in enjoying its sharp and often clever (if far-fetched) twists. There is one particular point of ingenuity it reaches with Mädchen Amick contriving to fake her own attempted murder by setting herself up to be hanged but leaving an alarm clock to go off in her bedroom and wake the two sleeping detectives guarding the house outside to come and save her.

On the minus side, director Ken Girotti fails to quite make Hangman work – he fails to give the twists enough dramatic intensity and the film ultimately seems stuck down at the level of exactly what it is – a made-for-cable psycho-thriller. The same script, one suspects, would have worked far better had Hangman been mounted as a cinematically released production and given a slicker commercial polish.

Hangman does feature a good performance from Lou Diamond Phillips. Phillips came to fame as the star of La Bamba (1987) but failed to consolidate that success in any major way and has spent the ensuing two decades slinging a paycheque in various direct-to-video action releases, playing every role with a nondescript lack of expression. Here though Phillips gives a coolly controlled and intelligent performance that is actually one of the best that one has seen him in.