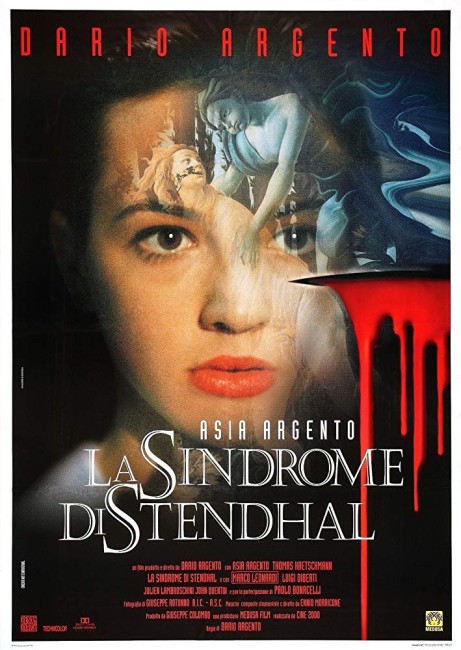 Anna Manni wakes up in a hotel room in Florence having lost her memory. She soon rediscovers that she is a junior detective from Rome. A psychologist determines that she is suffering from The Stendhal Syndrome, a psychological condition where works of art cause overwhelming emotions in viewers. At the same time, Anna is targeted by a serial-killing rapist.

The Stendhal Syndrome is a psycho-thriller from cult Italian director Dario Argento. The Stendhal Syndrome represents a return on Argento’s part to his earlier non-supernatural, psycho-thrillers (giallo thrillers) such as The Bird with the Crystal Plumage (1970), The Cat O’Nine Tails (1971), Four Flies on Grey Velvet (1971), Deep Red (1976), Opera (1987) and especially Tenebrae (1982), which this resembles in many ways.

In the 1990s, Dario Argento’s output has become increasingly more sporadic – three-and-a-half films throughout the entire decade. All of Argento’s films from this era – Two Evil Eyes (1990), Trauma (1993), this, and The Phantom of the Opera (1998) – while even more lush and beautifully produced than his previous films, have failed to fully satisfy.

Similarly, The Stendhal Syndrome is interesting, although not standout Argento. The title is taken from an existing psychological condition whereby people are so ecstatically moved by works of art that they become disorientated. The first thing you notice is that this title does not have much to do with the film – although lead actress Asia Argento does get disoriented in a gallery, this idea is not tied into the film in any way. The end of the film leaves you completely unsure what is going on inside Asia’s head. You have to resign yourself to the realisation that psychological motivation or even sense has never had much place in Dario Argento’s films and that his films are always about style.

Even in terms of Dario Argento’s style, The Stendhal Syndrome is routine. The pace is slow, only getting fired up in the scenes with Asia Argento tied up by rapist Thomas Kretschmann, which exist in an interesting state of ambiguity where we are not sure who is overthrowing whom. There is a striking scene near the beginning where Asia Argento physically enters a painting in a hotel room and emerges out into a street murder scene in another city where she is greeted as a police inspector for the first time, at the end of which she then walks back across the street to the open waiting hotel room and out of the painting again. It is an extraordinary sequence – but what exactly is going is never explained.

There are some occasionally striking scenes of violence that come with the artistic flourishes that one expects of Dario Argento – particularly a scene where a killer shoots a bullet through both cheeks of a victim’s face and then we see an eye looking through the double hole; or the killer forcing himself on Asia Argento, producing a razor blade out of his mouth and kissing her with it between his lips.