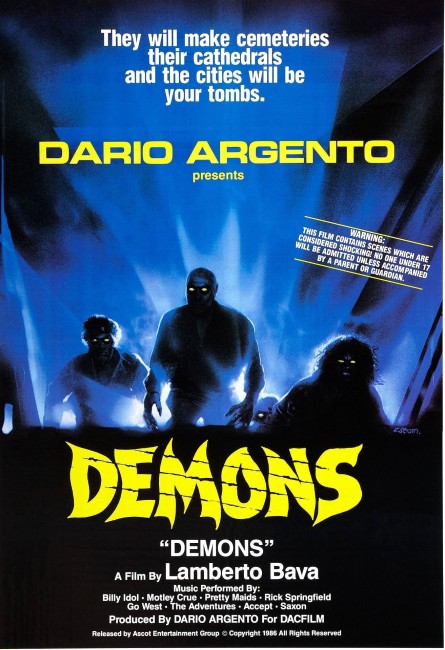 Two teenage girls are given a free pass to a horror film. The film concerns the opening of Nostradamus’s tomb and the despoilers being transformed into demons. During the screening, one of the attendees cuts themselves on a prop metal mask from the film that is being displayed in the theatre foyer. This causes them to be transformed into a demon and they start slaughtering members of the audience. The slaughtered dead then become demons too. However, when the others in the audience try to flee, they find that the exit doors only open onto brick walls and that they are trapped inside the theatre.

This absurdly entertaining film was a reasonable international video success that pushed Lamberto Bava, son of the late great Mario Bava, director of the likes of Black Sunday (1960), Black Sabbath (1963) and Danger: Diabolik (1967), to the frontline of Italian horror cinema.

Demons, which comes produced and co-conceived by Dario Argento, the reigning king of modern Italian horror, has been conceived fairly much in the vein of the zombie films that were all the rage in early 1980s Italian exploitation cinema following the success of Dawn of the Dead (1978). However, Demons, is a cut above the average gore-drenched Italian zombie film and has been mounted as a sort of The Evil Dead (1981) meets The Purple Rose of Cairo (1985).

This is a film that throws heed to its own shortcomings – like an entire lack of plot and much in the way of underlying explanation – and goes for it at breakneck pace. The results are, in Lamberto Bava’s own crude way, rather effective. It is a film wholly of effect, never one of connecting sensibilities – like how, for instance, during the climax for no discernible reason (other than providing the survivors an escape route) a helicopter crashes through the cinema roof.

The green goo and pasty-faced demons are cheesy but Bava launches in with such a ferociously determined enthusiasm that he consistently transcends such. The climax where the demons invade the balcony is an amazing all-out no-holds-barred gut-ripper. There is debate whether Lamberto Bava has any of his father’s style – certainly it is a debate that the consistent disappointment of his subsequent work lends much weight against – but there are times here when he definitely does, particularly where he manages to allow the film he is directing and the film screening in the theatre to merge with and echo one another to striking effect.

Demons 2 (1987) was a disappointing sequel, also directed by Lamberto Bava. Demons was such a success there have been numerous other films claiming to be sequels – there are at least two films laying claim to the title of Demons 3; Michele Soavi’s The Church (1989) originally started out as Demons 3; and Bava’s remake of his father’s Black Sunday (1990) was retitled Demons 5.