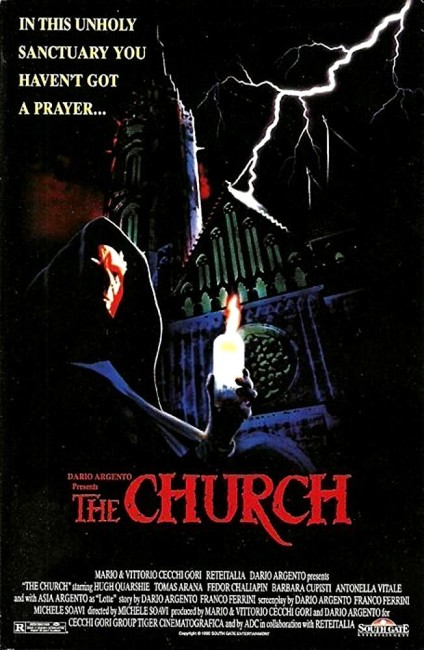 During the Middle Ages, The Knights Templar slaughter an entire village, believing them possessed by The Devil. The bodies are placed in a mass grave and buried even though some are still alive. A church is then built on the site. In the present-day, Evan takes a new job as the church’s librarian. He is attracted to Lisa who is working on a restoration project at the church. During her work, she uncovers a mysterious manuscript. Evan, who is fascinated by the church’s history, follows the clues in the manuscript down into the catacombs and opens a panel. This serves to unleash something that possesses him. The next day, the doors of the church become locked, trapping a group of people inside. As those inside try to find a way out, the possessed dead start killing everybody.

Michele Soavi was one of the most promising directors to emerge from mid-1980s Italian horror. Soavi started out working as an actor for Lucio Fulci and working as an assistant director to ario Argento, Joe D’Amato and Lamberto Bava, even to Terry Gilliam on The Adventures of Baron Munchausen (1989), Soavi made his directorial debut with the documentary Dario Argento’s World of Horror (1985) and then made the stylish giallo StageFright – Aquarius (1987), Soavi became a to-watch name and went onto other horror works such as The Church and The Sect/The Devil’s Daughter (1991). The film that Soavi is remembered for however is the indescribably madcap Dellamorte Dellamore/Cemetery Man (1994). Subsequent to that, Soavi has appeared to leave horror cinema alone, although has directed a number of other non-genre works.

The Church is produced and co-written by Dario Argento. Apparently, Argento wanted to make it as the third film in the Demons series that began with Demons (1985) and continued through Demons 2 (1986). These had the possessed dead respectively taking over a movie theatre and an apartment building. When planning what would have been Demons 3, Soavi said he wanted to forego the cheesy popcorn effects that the Demons series was founded around and make a more artistic film. Although billed as Demons 3 in some parts, The Church evolved into an original work. You can still see its roots as a Demons film – the story follows the same pattern and the latter half has a group of people locked in the church being killed by occult forces and their own dead returned possessed.

The Church is like a Demons film with artistic pretensions. The tone of it, at least during the build-up, resembles the extravagantly arty and baroque effect of one of Argento’s Three Mothers films – Suspiria (1977) and Inferno (1980). To this extent, the film even has a soundtrack composed by both Goblin and Keith Emerson who respectively put together the scores for Suspiria and Inferno. Like Suspiria and in particular Inferno, the film has the theme of buildings constructed as arcane occult devices by their architects that exude a physical evil out to those who venture under their arches in the present day.

Michele Soavi has filmed in a mixture of real churches and studio sets such that the film looks as though it has been shot in a genuine Mediaeval cathedral. The main problem with The Church is that nothing much happens during the first half. While Soavi seems to be aiming in the direction of one of Argento’s Three Mothers films, what seems lacking is Argento’s extravagantly theatric despatches peppered throughout the build-up.

The one scene that does work well during these scenes is where Tomas Arana ventures down into the catacombs, uncovers a crucifix-shaped tomb and shifts the lid, which then falls down into the depths emitting an eerie blue light in its place. The scene is aided greatly by thundering Gothic music on the soundtrack and there is a jolt as Tomas Arana pulls up a bag and then a pair of clawed hands abruptly reach up out of it and grab him around the neck.

The film does suddenly pick up after the 60-minute mark when we get the group of people trapped in the church and Soavi finally starts serving up the extravagant despatches – Roberto Corbiletto impaling himself on a jackhammer; Tomas Arana appearing to pull his own heart out while in a phone booth; the teacher (Patrizia Punzo) impaled in the throat with a section of wrought iron railing by the possessed Corbiletto; the aging bishop (Feodor Chaliapin) throwing himself from a balcony to impale his body on an iron spike; Claire Hardwick and boyfriend collapsing through the floor of a pit and she is left hanging from his hand down into a railway tunnel only to be promptly hit by a train; a flashback to show the original architect being impaled with a giant screw wound into his throat.

Most of these despatches are okay but nothing extraordinary. Michele Soavi does impress with some of his wildly artistic imagery – the naked Claire Hardwick enwrapped in the wings of a stone gargoyle; the dead from mediaeval times rising up from the depths in a single mass covered in mud; a demon mounting Barbara Cupisiti in the middle of an occult ceremony.

The problem with The Church is the same one shared by Argento’s films, the Demons films and those of the Argento imitator Lucio Fulci – it lacks a plot. Not much happens for a substantial part of the film and when it does it is never particularly clear why it does. The first half sets Tomas Arana and Barbara Cupisiti up as a standard, if rudimentary, romantic hero/heroine but when the church doors are locked, both characters almost completely vanish off-stage. All that we eventually end up with is film based around a progression of sadistic dispatches.