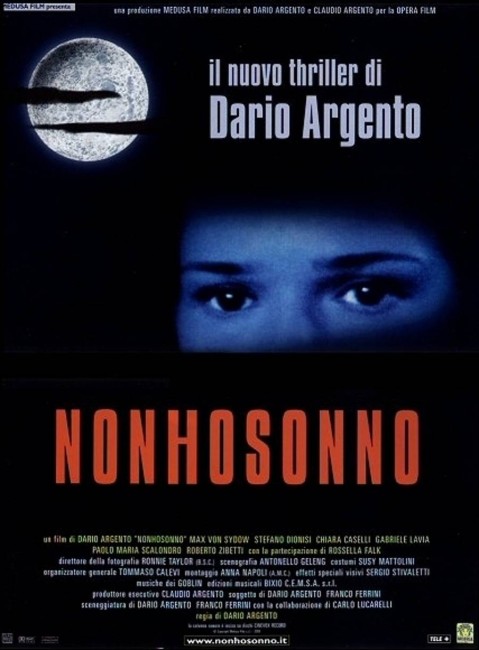 Police in Turin investigate two murders that appear to have the hallmarks of a serial killer from the 1980s known as The Dwarf Murderer. However, the Dwarf Murderer, Vincenzo de Fabritiis, is dead, his body having been pulled out of a river back in 1983. The police ask the advice of Ulisse Moretti, the now retired police inspector who investigated at the time. Also brought back in is Giacomo Gallo, the now adult child who witnessed his mother being murdered, although did not see the killer’s face. Moretti and Giacomo team forces, retracing old ground to see if the dwarf is still alive or if the killings were blamed on the wrong person. As new victims turn up, they discover that the killer is following a pattern based on an old nursery rhyme about the slaughter of animals.

Italy’s Dario Argento is a cult director. Argento emerged in the 1970s with a series of psycho-thrillers where the emphasis was less on the thriller aspect than it was on wildly arty ultra-gory murders. The Dario Argento cult reached its peak with films like Deep Red (1976), Suspiria (1977), Inferno (1980) and Opera (1987). Into the 1990s and beyond, Argento’s work is seen as lacking in many ways. (See below for a complete list of Dario Argento’s genre films).

Sleepless feels like a renaissance of Dario Argento themes. There are many echoes of previous Argento works – the killer writing about his obsession with murder reminds of the fevered opening of Tenebrae (1982); the scene where a victim gets their head bashed against a wall and their teeth smashed in is strongly reminiscent of a similar murder in Deep Red; there’s the killer making cut-out animals from Inferno; the ending from Tenebrae with multiple different revelations of who the killer is; as well as the frequent Argento theme of the key to the solving of the mystery lying in some essential clue that the protagonist has half-forgotten. Furthermore, Argento, for the first time in sixteen years, teams up again with the Italian rock group Goblin, whose soundtracks for several of his and various other Italian horror films, became cult items.

Sleepless is possibly the most disappointing of all Dario Argento’s films. While many have admitted disappointment with other of Argento’s works throughout the 1990s, I have defended them because they still have moments of great style. Alas, Sleepless seems lacking in this regard.

There is certainly a great scene the first few minutes in when prostitute Barbara Lerici goes to visit a client, turns down his unmentioned request for something deviant, flees but by mistake picks up a blue folder that happens to contain his confessions and newspaper clippings for the killings, and catches a train home, only to be pursued through the empty carriages by the killer.

It is a pure Argento-esque set-piece with fabulous shots cruising the length of the passing train to show Lerici running as the lights go out behind her, hiding in the accordion separator before being stabbed, and Argento then continuing on as her friend picks up the folder and becomes a victim too. The sequence is accompanied by the loud Goblin score pounding throughout the theatre, with swishes and whispers coming from all directions.

Alas, none of the other sequences in Sleepless come anywhere near the opening. In fact, aside from this, Sleepless is distinctly lacking in Argento-esque stylism. There are number of gory dispatches – a victim drowned and then having her fingernails clipped off; another victim getting a pen impaled in his ear; the aforementioned teeth bashing; and a particularly nasty flashback where the hero as a child witnesses his mother having a French horn repeatedly impaled down her throat. Alas, most of these set-pieces are routine and lacking in the arty stylism that runs throughout Dario Argento’s other films. There seems something distinctly missing this time around – in other scenes, for instance, victims are more mundanely dispatched by simply being pushed over the stairway rail or being shot.

The plot is oddly one of the most straightforward that Dario Argento has ever had. Most of his psycho-thrillers give the impression that he has no interest in the plot and where the revelation of the killer’s identity often seems written in as almost an afterthought as though Argento had decided which cast member it was by randomly drawing straws. Sleepless is the nearest Argento has come to writing a traditional psycho-thriller, one that could function reasonably effectively as a thriller on its own with all the gory despatches taken out. (At no point does the film ever explain the relevance of the title Sleepless).

Dario Argento’s ace in the hole is Max von Sydow who gives a characteristically thoughtful and dignified performance. The character comes with some wry effective speeches comparing the modern computerised detection that has taken over from the traditional methods of his day. Von Sydow stands out where the colourless younger leads – in particular Stefano Dionisi, who makes almost no distinction on the film, and Chiara Caselli, who seems all of about the age of 14 – do not.