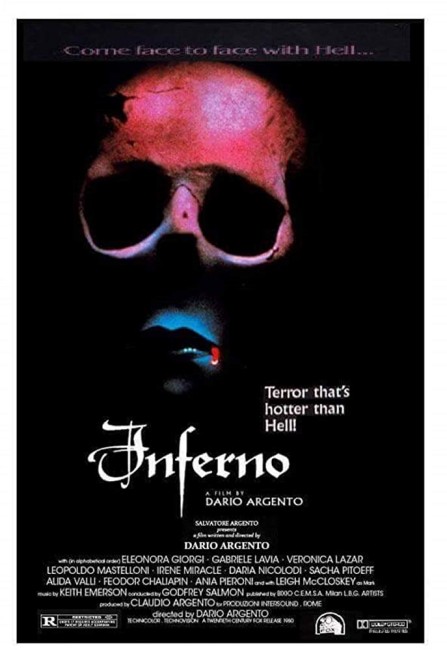 Rose Elliott buys a book entitled ‘The Three Mothers’ by the architect Varelli, which details how he built houses for each of the three powerful witches known as The Three Mothers. Rose realises that the New York apartment building she lives in is the house of Mater Tenebrarum, The Mother of Darkness. Rose is then followed and stabbed to death. Her brother Mark comes from Rome to investigate, encountering a series of bizarre occult murders centred around the apartment.

Italian director Dario Argento had great international success with his Suspiria (1977), which served to turn Argento into a cult director. Argento next went onto make Inferno, announcing that it was the second film in a trilogy about The Three Mothers, of which Suspiria was the first. The trilogy remained uncompleted for a quarter century after this – although Luigi Cozzi’s cheap The Black Cat (1990) unofficially purported to do so – until Dario Argento returned to it 27 years later with Mother of Tears: The Third Mother (2007). The original was later remade as Suspiria (2018).

Dario Argento is a director who has always regarded plots as a necessary evil. Both Suspiria and Inferno are the natural out-thrust of Argento’s earlier giallo mysteries like The Bird with the Crystal Plumage (1970), The Cat O’Nine Tails (1971), Four Flies on Grey Velvet (1971) and Deep Red (1976) in that they allow him to dissociate style from the rational needs of thriller narrative. The half-clues that haunt Argento’s giallo mysteries still remain here – the mystery about the key below the soles of one’s feet, the scratched word “Mater” – but they are so dissevered from plot as to be almost superfluous. Inferno has little or no plot at all; it is almost pure effect.

Argento stages his trademark sadistic set-pieces – a victim’s neck is held down beneath a window, which is then repeatedly slammed down on it like a guillotine blade; the crippled book-seller goes to drown a bag full of the cats that overrun his shop only to be attacked and gored by rats. The supernatural and inexplicable creep up behind the door of the everyday world in everything that happens – in a lecture theatre, a mysterious girl with penetratingly intense grey eyes sits stroking a white cat and whispers words that Leigh McCloskey cannot hear over the music from his headphones; a mystery wind rushes into the theatre, and the camera joins it, taking to the air, during which the girl disappears.

Images make fascinating distractions – the prelude to the killings at Eleonora Giorgi’s apartment are intercut with the visions of a hanging woman, a lizard devouring a butterfly and a pair of gloved hands snipping the heads off black paper-cutout puppets; or Irene Miracle’s straying into the bookshop, which seemingly reveals an alchemical laboratory underneath and a man who sinisterly removes a glove to reveal a clawed hand before attacking her – that have no relation to anything else whatsoever.

The film is lit with Dario Argento’s customary use of bold, primary lighting tones. It is exquisitely dressed at all opportunities – beautifully arranged white telephones, artfully broken glass ornaments, the camera focused on the glistening lips of Daria Nicolodi more interested in them than what she has to say. Images are set up for the pure style of it – the startlingly surreal vision of the bloody hands tearing at the blue-lit white screen before a body falls through.

The opening of scene offers the most beautifully elegant and frighteningly perverse set-up in the entire film (a sequence that was staged by Italian horror legend Mario Bava) as Irene Miracle discovers a pool in the cellar and enters it after a dropped key chain to find a submerged ballroom dressed in exquisite period trapping, the beauty turning to terror as she becomes trapped with a bobbing corpse and keeps banging against the roof unable to find the way she came in.

Fascinating, irrelevant, and a stylish, exquisite distraction, Inferno is a far better film than Suspiria is. This is maybe the point that Dario Argento’s love of surreal sadistic horror grew out of the cocoon of the psycho-thriller it had always seemed trapped in and blossomed as a purely surreal narrative of frightening, artistic images.

The score, from Emerson, Lake and Palmer’s Keith Emerson, usually always the most pretentious element of a Dario Argento film, offers up the usual pounding electric guitar and synthesizer noise combined with frenetic classical arias to questionable if fierce effect.