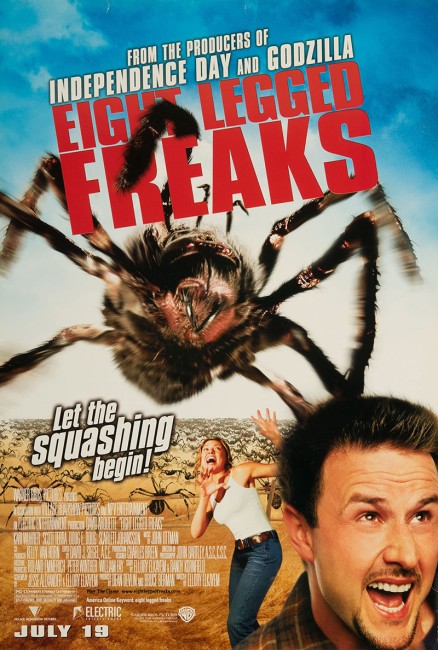 A toxic waste spill outside the small nowhere town of Prosperity, Arizona, starts causing spiders to grow in size. Soon the spiders increase until they are creatures the size of large vehicles and ravage the town, devouring humanity as food.

Eight Legged Freaks comes from the creative team of Dean Devlin and Roland Emmerich. Together, Roland Emmerich as director, Dean Devlin as screenwriter and usually both as producers, previously made the likes of Universal Soldier (1992), Stargate (1994), Independence Day (1996) and Godzilla (1998). With Eight Legged Freaks, Dean Devlin produces and Roland Emmerich executive produces, while direction has been turned over to New Zealand-born newcomer Ellory Elkayem who was selected to helm the film on the basis of his previous film about giant bugs – the short film Larger Than Life (1997). Elkayem had also made They Nest (2000) about killer cockroaches.

Roland Emmerich and Dean Devlin’s aforementioned films are all big-budget reworkings of science-fiction cliches. Dean Devlin writes to genre formula while Emmerich directs in big, simplistic and frequently patriotic emotional cues. The virtues of Emmerich and Devlin’s films are always and entirely the lavishness of the special effects spectacle thrown at an audience. It is no surprise that Roland Emmerich’s success rose with the 1990s modern CGI blockbuster, which emerged following Terminator 2: Judgment Day (1991) and Jurassic Park (1993), after which many tried and true themes – the disaster movie, the monster movie, the bug movie, the talking animals film, the WWII movie – were given lavish computer-generated special effects workovers. Emmerich and Devlin’s Independence Day and Godzilla were respectively no more than a 1950s alien invasion film and a Japanese monster movie made with the virtue of several major CGI houses plying their artistry.

Thus it is no real surprise about the type of film that Eight Legged Freaks is – it is a spider takeover film a la the likes of Tarantula (1955), Earth vs the Spider (1958), The Giant Spider Invasion (1975), Kingdom of the Spiders (1977) or Arachnophobia (1990) – mounted with a full arsenal of CGI effects. Plotwise everything about Eight Legged Feaks has been written to generic formula. There is the toxic waste spill up at the old mine and a host of stock characters – the greedy mayor/real estate developer, the teenage girl who is saved when she walks away from an opportunity to lose her virginity in less-than-dignified circumstances, the hero returned to town with unresolved romantic issues, the conspiracy nut who is proven right, the bright kid who could tell everybody what is going on if only grown-ups would take him seriously.

There is occasionally the sense that Eight Legged Freaks is trying to be clever and subvert the cliches, a la the more sophisticated genre deconstructions of Kevin Williamson – Scream (1996), The Faculty (1998) – but the results are clumsy. Eight Legged Freaks tries to second-guess genre cliches – the conspiracy nut has no trouble believing in alien invasions but can’t cope with the concept of giant spiders, the heroine second-guesses the hero’s long apologetic romantic reconciliation and delivers it instead of him.

We get various genre in-references – scenes from Them! (1954) play on tv; there is a parrot that says “I see dead people”; lines like “It’s a spider, man”; while the siege at the mall recalls Dawn of the Dead (1978); and the town Prosperity, Arizona seems so named to recall the town of Perception, Arizona in Tremors (1990) – but they fall flat because there is no cleverness to them, just the expectation on the film’s part that we admire it because it is letting us know that the filmmakers have seen the same films we have.

Certainly, you cannot knock Eight Legged Freaks for being exactly what it sets out to be. Eight Legged Freaks is designed entirely as a big B movie with CGI effects and that is exactly what one gets. The effects are well accomplished and there are some nifty sequences with the spiders pursuing vehicles and rampaging through the town. Especially standout is a sequence where the spiders pursue a group of kids on dirtbikes and in one shot one leaps through the air to snatch a rider in the midst of a jump.

There is a thorough absurdity to the premise but at least the film knows it and carries on entertainingly regardless. Eight Legged Freaks is not self-knowing enough or even one that rises above the cliches to be particularly good, but at least it is a more honest B movie than Arachnophobia, which seemed afraid of such association, ever was.