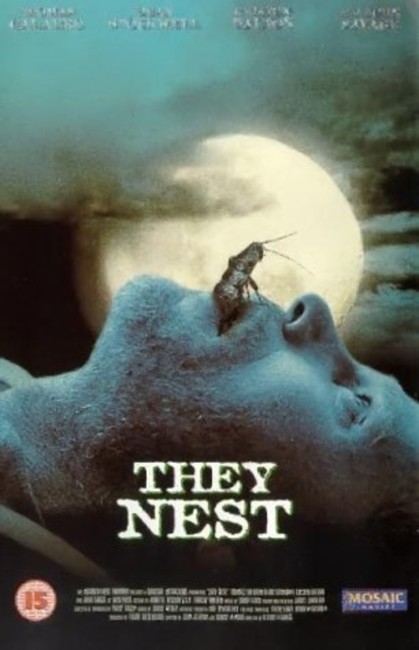 Boston surgeon Ben Cahill suddenly loses his nerve in the operating room. He is ordered to take leave by his superior. He travels out to the holiday home that he and his ex-wife brought on the island in Maine’s Casco Bay. On the way there, Ben meets the island’s electrician Jack Wald – only to discover that the house he bought is the former Wald family home that ended up sold over unpaid estate taxes. Ben settles in but the house is plagued by erratic power cuts. Believing that Jack is causing these in an effort to drive him out, the two men have a heated confrontations that is broken up by Sheriff Hobbs. Hobbs then asks Ben’s opinion on a dead body that has been found and Ben becomes curious about the post-mortem stricture of the limbs. Ben then hits and kills Jack on the road as he flees from attack by bugs. This has Jack’s brother and other islanders wanting to lynch Ben. At the same time, Ben realises that the deaths are being caused by a voracious breed of African insect that resembles a cockroach. As the roaches overrun the island, Ben tries to get the locals to safety.

They Nest was the first film from New Zealander Ellory Elkayem. Elkayem made his feature-length debut here on the back of a well-received giant bug short film Larger Than Life (1998). They Nest netted him the assignment of the Roland Emmerich produced giant spider film Eight Legged Freaks (2002), Elkayem’s most high profile work to date. After that, Ellory Elkayem made the back-to-back shot Return of the Living Dead: Necropolis (2005) and Return of the Living Dead: Rave to the Grave (2005), followed by Without a Paddle: Nature’s Calling (2009) but thereafter vanished from screens.

They Nest doesn’t do anything that varies from the formula of the bug attack film. The plot fairly much follows the one in Arachnophobia – Thomas Calabro is a doctor who is new to town and falls under suspicion from the locals when he arrives in the midst of a series of bug attacks. They Nest doesn’t vary too much from the basics but does a fair job of building out the character tensions. In this regard, John Savage feels like he is right in his element as a redneck with a chip on his shoulder over the loss of the family house, while Kristen Dalton adds charms as a local girl who takes an interest in Thomas Calabro.

In fact, the build-up sections work better than the ones in the latter half once the bug attack begins. Here the film operates in all the predictable ways – although I did like one shot where Thomas Calabro is eating dinner and does not realise he has picked up a roach on the end of his fork. Certainly, the one thing you have to commend Ellory Elkayem on is that he makes the bug attack scenes look convincing – it is never clear, for instance, whether he is using visual effects, physical effects or even real bugs.