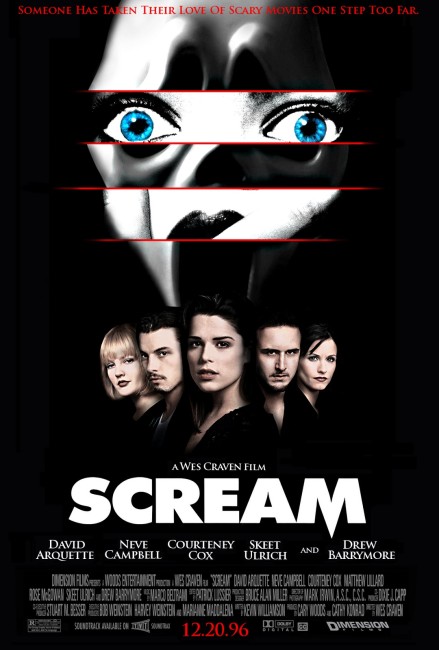 In the small town of Hillsboro, teenager Casey Becker is alone at home when she starts receiving a series of anonymous and at first flirtatious phone calls, which suddenly turn nasty and threaten to kill her. She is given a chance to play a game for her boyfriend’s life – to answer a question about a scary movie – but is killed when she gets it wrong. Next, teenager Sidney Prescott and her friends start receiving phone calls asking about their favourite scary movie and are pursued by the killer who wears a cheap Halloween mask. As bodies pile up, evidence seems to point that the killer might Sidney’s boyfriend Billy Loomis. At the same time, tabloid reporter Gail Weathers arrives in town, digging up dirt on the murder of Sidney’s mother and suggesting that the man in jail for the crime was innocent and that the real killer is the one behind the current string of killings.

Scream would have to be the singlemost influential horror film of the 1990s next to The Silence of the Lambs (1991). Scream inspired a host of (mostly inferior) copycat teen horror films and created a new fad for the postmodern slasher film where characters are constantly ironically referencing their actions in respect to other films. More so than that, Scream was a career springboard for almost all involved. A number of youthful actors launched their careers as a result of the film’s success – Neve Campbell, Matthew Lillard, David Arquette, Jamie Kennedy and Rose McGowan, while for about five minutes Skeet Ulrich was briefly touted as a major star. Scream also brought screenwriter Kevin Williamson to prominence and launched his career with meteoric, if uneven, success. Furthermore, the film was a major boost for horror director Wes Craven, whose films throughout the early 1990s had only met with middling reception.

For Kevin Williamson, who was then a novice screenwriter with no prior experience, Scream (originally titled Scary Movie) was a spec script. The script became the subject of a bidding war between various studios literally overnight. Williamson cannily sold the script to Miramax subsidiary Dimension Films on the grounds that the film had a greater chance of being produced on a lesser budget there than it would have been being swallowed up in a big studio machine. There Wes Craven eagerly signed onto the project.

Wes Craven had first emerged as a director in the 1970s with shock and brutality classics such as The Last House on the Left (1972) and The Hills Have Eyes (1977) and then sustained a patchy career throughout the 1980s. (See below for Wes Craven’s other films). The work that propelled Craven to the forefront during that decade was the enormous success of the original A Nightmare on Elm Street (1984). Subsequent to Elm Street, Wes Craven’s films developed an increasing sophistication – the beautiful and frightening The Serpent and the Rainbow (1988), the intensely weird The People Under the Stairs (1991) and the conceptually audacious meta-fiction Wes Craven’s New Nightmare (1994). Through all of Wes Craven’s films runs a fascination with dreams and the way that these can intrude into the real world, and in later films of the blurring between fiction and reality.

The joy of Scream is that it is a postmodern slasher film (See Slasher Films). The characters all come genre-informed and the film is filled to the edges and brimming over with genre quotes and in-jokes – it many respects this is the film. In schoolyard discussion, people are certain the killer is not a woman because a woman couldn’t kill until someone asks “What about Basic Instinct (1992)?” Someone’s flashbacks are compared to being “just like Jodie Foster in The Silence of the Lambs.” The beleaguered heroine complains “I wish I was in a Meg Ryan movie” and hopes that Tori Spelling will get to play her when they make a tv movie out of the incident (a joke that actually came to pass in the sequel). Characters compare their actions in terms of other films – the heroine’s boyfriend explains his wanting to take their relationship a step further in terms of The Exorcist (1973) being cut for tv: “What I’m saying is I want to take it beyond the PG-13 stage.”

Craven and Kevin Williamson even include Elm Street in-jokes. “I liked the first Elm Street,” Drew Barrymore comments at one point, “the rest sucked.” And then there is the suspiciously familiar janitor in a red-striped shirt (played by none other than Wes Craven himself) that Henry Winkler encounters in the hall, “Hi, Fred.”

In comparison to their 1980s slasher movie counterparts, the characters here have a cynically aware savvy – the virginal heroine is much more capable of standing up for herself and at one point turns around and starts harassing the psycho of the piece – there are few other slasher films where the psycho of the show ends up taking such a battering as he does here.

The genre in-referencing and in-joking thing was by no means new to horror. Directors like John Landis, Fred Olen Ray, Jim Wynorski and others had been packing their films with in-references to B sf and horror movies and characters named after genre directors and stars. Joe Dante, in films like Piranha (1978), The Howling (1981), Gremlins (1984) and Matinee (1993), had elevated this genre in-referencing almost to the point of an entire career.

Unlike many of these, Scream is not just a series of gags playing on other films – it takes the genre’s formula and twists it around on itself. Kevin Williamson sets up Jamie Kennedy as a horror movie fan who is constantly connecting everything back to slasher films. He creates the famous formula for survival in a horror film: “No. 1 – never have sex. No. 2 – never say “I’ll be right back” and offers such advice as “If the cops saw Prom Night (1980), they’d know exactly what’s going on.”

It almost reaches a point of meta-fictionality with the recognition by the characters that they themselves are characters in a film – Rose McGowan confronts the killer: “Do you want me to play the helpless victim? Please don’t hurt me, Mr Ghostface, I want to be in the sequel.” And there is the ending where Jamie Kennedy comments to Neve Campbell upon seeing the psycho’s dead body: “If this was a scary movie he’d leap back up for one last scare,” to which she replies: “Not in this movie” and shoots him in the head.

What was so refreshing about Scream was that it was able to succeed by showering its audience with a witty barrage of genre in-jokes. It is hard to believe that a film with such a high level of intellectual gamesmanship could succeed so well with the teen audience that it was sold to. One need only look at a number of other films of then recent lineage such as Last Action Hero (1993) and Wes Craven’s own New Nightmare – both of which sophisticatedly spoofed clichés and played with the artificiality of the genre and both of which ended up being flops with their target audiences.

It is probably a good thing that Kevin Williamson had the shrewdness to sell the script to Wes Craven. One suspects that there are not many other directors that could have pulled the film off successfully. Scream is certainly a work well suited to Wes Craven’s temperament. His films up to that point had increasingly been moving toward the concept of meta-film – see the ingenious Wes Craven’s New Nightmare – so a film like this that both steps outside and plays with the conventions of the genre it comes in but is also a suspense-slasher film, is perfectly suited to Craven’s sensibilities. He succeeds in capturing just the right balance between the wittily self-aware and suspenseful that the film needs to work.

Surprisingly though, Scream is a film carried by its script and gags, far more so than it ever is by the suspense and shock. The best sustained sequence is the opening with the caller playing games with Drew Barrymore – the flirtatious calls suddenly turning threatening “Hang up on me bitch and I’ll gut you like a fish”; the revelation of the boyfriend tied up on the patio; the killer’s insistence on her playing a game to save his life – “Who was the killer in Friday the 13th (1980)?” which, with typically Williamson-esque wit, she gets wrong by saying Jason; the scenes of her being attacked just as her parents arrive home and hearing her dying screams via the portable phone that is still in Barrymore’s hand as she is dragged away. None of the other sequences in the film quite hit this level of jokey suspense, although Craven does offer up one wild vision of Rose McGowan trying to crawl through a cat door in a garage and being trapped halfway through as the killer raises the door.

Neve Campbell does an effective job of playing the new 90s virgin slasher heroine. Matthew Lillard plays typically over-the-top, although perfectly acceptably for the part at hand. The best performance comes from Skeet Ulrich who plays up from under his cowlick with a handsomely dangerous gleam that leaves one uncertain right up until the end as to whether he is the killer or not. Credits watchers will be amused by one of the closing credits that comes after the list of thanks, “No thanks at all to the Santa Rosa Educational Board”. The Santa Rosa Educational Board at first allowed the film to go ahead using their school as a location and then changed their minds when they found out it was a horror film, forcing the production to relocate to Healdsburg, California.

There were two lesser sequels Scream 2 (1997) and Scream 3 (2000). The same cast repeat their roles and the films play in similarly witty ways with the notion of slasher sequels. Wes Craven directs all three and Kevin Williamson scripted the second but not the third. Craven, Kevin Williamson and most of the cast returned for the fine Scre4m/Scream 4 (2011). The premise was later reworked by Williamson as the tv series Scream: The Series (2015– ). David DeCoteau made Final Stab (2001) alias Final Scream/Scream 4, but this is not a sequel and is otherwise unrelated. Scream was parodied in both Scary Movie (2000), Shriek If You Know What I Did Last Friday the 13th (2000), Detention (2011) and Fear, Inc. (2016). Craven also made a cameo directing a parody of Scream in Kevin Smith’s Jay and Silent Bob Strike Back (2001).

Kevin Williamson’s other films are:– the script for I Know What You Did Last Summer (1997), another in-jokey postmodern slasher; the script for Scream 2 (1997); as creator of the hit non-genre teen tv series Dawson’s Creek (1998-2003); as executive producer of Halloween H20: Twenty Years Later (1998); the script for the wittily self-aware alien body snatchers film The Faculty (1998); as producer of the voodoo film Venom (2005); and as writer/producer/creator of the tv series Glory Days (2002), a rather good smalltown mystery series that was naturally run over by a number of Williamson-esque deconstructions, but that only lasted for ten episodes; the similarly short-lived series Hidden Palms (2007); the tv series The Vampire Diaries (2009-17); the script for Scre4m/Scream 4 (2011); the teenage witches tv series The Secret Circle (2011-2); the serial killer tv series The Following (2013-5); the tv series Stalker (2014-5) about a police unit that hunts stalkers; the tv series remake of Time After Time (2017); and the tv series Tell Me a Story (2018– ) that tells a series of modernised fairytales. Williamson made his directorial debut (and so far only outing) on the teacher-pupil psycho-thriller Teaching Mrs. Tingle (1999). Williamson later reteamed with Wes Craven for the disappointing werewolf film Cursed (2005).