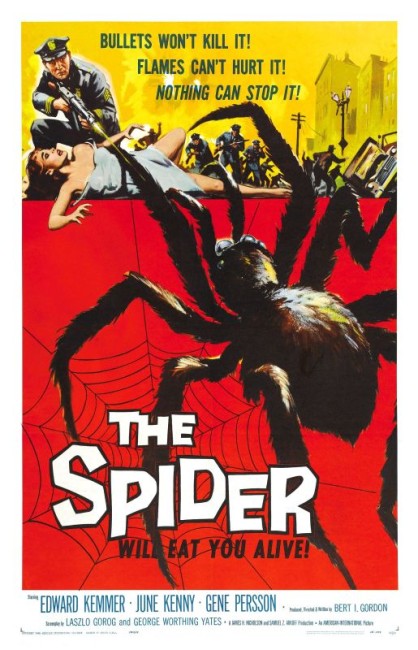 In the small town of River Falls, Carol Flynn and her boyfriend Mike Simpson search for her missing father. The search takes them to the town’s caverns where they encounter a giant spider. Led by Kingman, the high school biology teacher, the authorities gas and kill the spider with DDT. However, after Kingman puts the spider on display in the high school, it returns to life and proceeds to rampage through the town.

As with most of Bert I. Gordon’s films, Earth vs the Spider is cheap and fairly awful. The title – Earth vs the Spider – sets up the promise of a grandiose conflict, is even suggestive of the entire world being taken on by a spider. However, what is delivered falls woefully flat of any such promise in actuality. The film quickly falls into the cliches of the 1950s atomic monster/giant bug film (although Earth vs the Spider is one of the few in the genre where atomic radiation is not used as an explain-all for what is going on). Gordon uses his customary technique of optically enlarged bugs – the film here is so cheap that he even uses some of the same shots several times. The film is shot in the Carlsbad Caverns, which make for an interesting location, although Gordon is too pedestrian a director to ever develop any atmosphere.

Earth vs the Spider has also clearly been mounted as part of the 1950s teen monster fad begun with I Was a Teenage Werewolf (1957), although one teenager (played by Troy Patterson) looks like he is well into his thirties. There is a sequence where the film stands still for a rock’n’roll number that seems particularly grafted on. The film also shows Gordon in a self-referential mood – a cinema is screening Gordon’s The Amazing Colossal Man, while outside one teenager talks about a new picture coming out – “something about Puppet People – sounds fairly wild.”

The film was remade as Earth vs the Spider (2001), although this only borrowed the title and is otherwise a film about a man mutating into a spider.