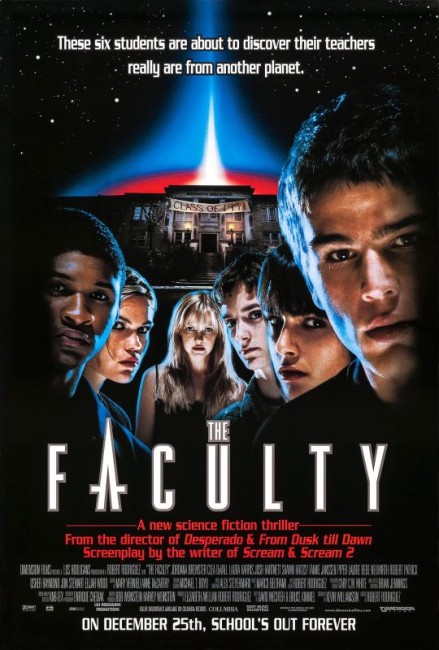 An alien force is taking over the teaching faculty at Ohio’s Henderson High School. When class brain Casey Connor and head cheerleader Delilah see two teachers take over another in the faculty lounge, they try to alert authorities but are ridiculed. Six of the students begin to believe what is happening. After discovering that the aliens’ only weakness is their vulnerability to the class drug dealer Zeke’s homebake, they set about trying to stop the invasion by finding and killing the alien queen.

The Faculty offered an interesting team-up between director Robert Rodriguez and screenwriter Kevin Williamson. Robert Rodriguez, through his association with Quentin Tarantino and works like El Mariachi (1993) and Desperado (1995), had developed an image as one of the coolest directors of the late 1990s. On script was Kevin Williamson, who had sprung to the forefront of the horror genre a couple of years earlier with his script for the witty slasher genre deconstruction Scream (1996), as well as I Know What You Did Last Summer (1997).

With The Faculty, Kevin Williamson and Robert Rodriguez have unabashedly set out to make a B movie. The basic premise – the teachers at a high school have been taken over by alien body snatchers – has a cheesy face-value silliness that the film plays with a remarkably straight face. Kevin Williamson applies the same audience-winking shrewdness that he did to the slasher film on the Scream films but this time the target is the 1950s mini-genre of Alien Takeover movies like It Came from Outer Space (1953), Invaders from Mars (1953), Invasion of the Body Snatchers (1956), and I Married a Monster from Outer Space (1958).

As with the Scream films, Kevin Williamson has a great deal of fun mocking the cliches while extensively quoting from the genre. The situation in the film is immediately compared to Invasion of the Body Snatchers, which Clea DuVall promptly points out was based on Jack Finney’s novel. Maybe, Josh Hartnett argues, Finney was writing about something he experienced in high school? to which DuVall reacts with cynicism, calling Invasion of the Body Snatchers an obvious ripoff of Robert Heinlein’s The Puppet Masters (1951). (Kevin Williamson is clearly a Robert Heinlein fan – earlier in the film DuVall is seen reading a copy of Orphans in the Sky [1963]).

And then there are the speculations on how the aliens get away with it – by manipulating the media: “Spielberg, Emmerich, Sonnenfeld – maybe they were all part of this? They made all these films to make it sound too silly to be plausible” – a suggestion that has a wittily paranoid plausibility that momentarily makes you stop and think. And the reasons why the aliens have chosen smalltown Ohio? “Don’t you think it’s easier to sneak in the back door like this than blow up The White House?”

In some ways, The Faculty is almost a wilful crosshatch between The Breakfast Club (1984) and Invasion of the Body Snatchers. Kevin Williamson draws a number of sharp teenage characters. The six principal teens all represent common caricatures from teen movies – the jock, the cheerleader, the nerd underdog, the girl-next-door, the class drug dealer and so on – but all are sharply played against type – the jock, for instance, has a speech about wanting to quit the football team and study so that he can prove himself.

The film is more like a Breakfast Club that wilfully celebrates under-achievement. It is made by someone with a strong anti-authoritarian streak of their own – the background is gleefully filled with throwaway images of students beating up one another in the playground or sitting strung out on drugs and there is considerably subversive cheer to the film’s central theme of teens taking on the teaching staff and humanity’s single hope against the invaders be the class drug dealer’s homebake. The film has a constant sense of humour – a father’s threat against his troublesome son is not only to ground him but to also confiscate the stash of pornography under his bed. [The Faculty has a number of similarities to Disturbing Behavior (1998), which came out the same year and also championed the side of the slackers as they fought a force taking over the high school – in that case a sinister plot to brainwash students].

The characters are filled out with some good actors. Amongst the teens, Clea DuVall plays with some depth as the cynical Stokely and Laura Harris is extremely good as the virtuous whiter-than-white new girl in town. Robert Rodriguez also casts a number of fine older actors – Piper Laurie, Robert Patrick, the underrated Bebe Neuwirth – in bit parts as the teachers, but alas they remained underused.

Robert Rodriguez made his imprint on the action film with El Mariachi and Desperado, films that employed the sensibilities of the spaghetti Western and the revved-up balletic pyrotechnics of the Hong Kong action film with considerable elan. Here, and in his previous film From Dusk Till Dawn (1996), Rodriguez started toning down the visual pyrotechnics. While The Faculty lacks the spectacular visual flash of Robert Rodriguez’s earlier work, there are number of good solidly directed scenes – the spooky scenes with the discovery of the parasite and where the teens accidentally cut off science teacher Jon Stewart’s fingers. Rodriguez has modelled several scenes after the remake of The Thing (1982) – notedly one with Famke Janssen’s head being severed and running around on its own, and another where the teens inject themselves with the drug to test who is an alien that is modelled after The Thing‘s blood-test scene. The latter scene is particularly amusing for its deft cutting between the increasingly hysterical images of each teen progressively getting stoned and spooky paranoia about which of them is an alien.

Robert Rodriguez is less effective when it comes to the full-size tentacular monsters. One of the problems he demonstrated on From Dusk Till Dawn was a tendency to let the creatures being represented by CGI seem very obviously to be just CGI effects. Here the monster that emerges at the climax seems merely an effect that never interacts with its surroundings.

Robert Rodriguez’s other films of genre interest are the vampire/getaway thriller From Dusk Till Dawn (1996); the juvenile spy adventure Spy Kids (2001) and sequels Spy Kids 2: Island of Lost Dreams (2002), Spy Kids 3-D: Game Over (2003) and Spy Kids: All the Time in the World (2011); the graphic novel adaptation/film noir pastiche Sin City (2005) and Sin City: A Dame to Kill For (2014); the children’s film The Adventures of Sharkboy and Lavagirl in 3-D (2005); the zombie film Planet Terror (2007), half of the Quentin Tarantino collaboration Grindhouse (2007); the children’s film Shorts (2009); Machete Kills (2013), a sequel to his earlier Mexican-themed action film that frequently enters into science-fiction territory; and the manga adaptation Alita: Battle Angel (2019). Rodriguez has also produced From Dusk Till Dawn 2: Texas Blood Money (1999), From Dusk Till Dawn 3: The Hangman’s Daughter (2000) and Predators (2010), as well as developed the tv series From Dusk Till Dawn (2014-6).

(Nominee for Best Original Screenplay at this site’s Best of 1998 Awards).