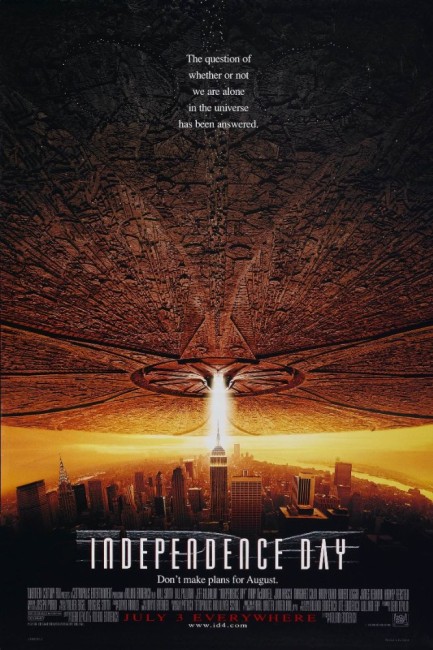 SETI suddenly detects radio signals coming from the direction of the Moon. A mothership enters Earth orbit and sends out several ships each fifteen miles in diameter that settle above the major cities of the world. There is widespread uncertainty about what this means. SETI scientist David Levinson detects a coded message hidden inside Earth satellite transmissions and races to President Thomas Whitmore to demonstrate that this is a countdown. They are only barely able to evacuate the White House as the alien ships open fire. The ships destroy world cities and cause mass devastation. The President takes refuge at Area 51, which houses an alien ship that crashed at Roswell. Levinson comes up with an idea to penetrate the forcefields that make the alien ships impervious to all attack using the Roswell ship. As the plan gets underway, Whitmore rallies the devastated Earth defence forces in a last ditch effort.

Independence Day was a massive success. It was the biggest box-office earning film of its year and went onto enter the Top 10 All-Time box-office list. Independence Day was made by German-born Roland Emmerich, a genre fan turned director. Emmerich first emerged onto cinema screens with The Noah’s Ark Principle (1984), a promising attempt at a hard science film about weather manipulation that floundered in a weak plot. Emmerich’s subsequent films Making Contact/Joey (1986), Ghost Chase (1987) and Moon 44 (1990) gave no indication he would ever amount to anything of note. However, Emmerich’s chance came with the noisy and violent Universal Soldier (1992). This allowed Emmerich, along with his American writing/producing partner Dean Devlin, who had previously appeared as an actor in Moon 44, entered the American mainstream. The surprise the two next made was Stargate (1994), which showed that with a big budget Roland Emmerich was capable of bringing a cliched hodgepodge of a script – a 1950s styled planetary romance shot through with an entertaining dash of Erich von Daniken – into a quite reasonable film that had the flair of old widescreen epics and the unfolding excitement of good hard science-fiction. The success of Independence Day launched Roland Emmerich as an A-list director.

However, Independence Day fails to match the promise that Roland Emmerich showed with Stargate. The drive toward awe and mind-stretching scale is arguably a fundamental component of science-fiction. This is something that is often created with a routine banality, especially in the era of the modern CGI film post-Jurassic Park (1993). Science-Fiction critic Peter Nicholls is scathing about it – he cynically includes a section in the second edition of The Encyclopedia of Science-Fiction (1992) called Big Dumb Objects. Big Dumb Objects are the very – arguably the sole – appeal of Independence Day. All that Emmerich and Dean Devlin have done is remount a 1950s styled alien invasion film with a 1970s disaster movie ensemble cast, but above all big, spectacular special effects.

Independence Day‘s entire selling point is its epic scale and its effects. It is a film that panders to this desire for awe and spectacle in wholly routine ways. The effects leave one dazed with the vastness of its scale – spaceships that dwarf entire cities, mass destruction on a heretofore unprecedented scale, flights inside ships with interiors that could swallow the Grand Canyon. The audiences of the film seem delirious with the size of it all – slack-jawed they sit dumbfounded and allow the stupendous scale of everything to wash over them irrespective of what. The audience I was with cheered on the scenes of mass destruction simply because they were awesome, seemingly unconcerned about the fact that what they were cheering on was the trouncing of the Earth.

But behind all the epic flash, Independence Day‘s Big Objects are really quite dumb. They just Are. They only exist as an inanimate force of protagonism for the rest of the film to be rallied against. Why the aliens are here we never know – their reasons are speculated about a couple of times – but all the scale never attains any motivation.

Roland Emmerich and Dean Devlin pull out every cliche in the alien invasion book. They copy scenes from The War of the Worlds (1953), the grandfather of alien invader films – the aliens proving hostile after enthusiastic onlookers greet them with open arms and peace flags; the atomic bomb is thrown against the aliens but proves useless and fails to even dent their forcefield. The cliches roll out. Not one but two sets of lovers are reunited in the ruins after being thought dead; there is only one chance to defeat the invaders – a million-to-one chance but humanity’s only chance …; humanity rallies together for the last rousing battle etc etc. Emmerich and Devlin serve up these cliches, seemingly without even the awareness that they are. More alarmingly, characters are written as outright stereotypes – the complaining Jew, the gay man who flounces about in nervous hysterics when panic breaks out and Brent Spiner playing an uber-geek who is a mad scientist in all but name.

Independence Day comes with readied speeches and its heroism posed and inflated. Its emotions are simple-minded and rabble rousing – ones where The President is a Gulf War veteran who personally leads the cavalry into battle, where everyone rises to the greatest of their abilities to fight against the menace and even the washed-up drunk manages to rise to a moment of noble sacrifice. The camera pans over American landmarks – the Statue of Liberty, the Lincoln Memorial, the Iwo Jima statue, while the opening shot is of the American flag planted on the Moon – such that one might not be wrong in thinking they are watching a travelogue. The film plays on the iconic value of such landmarks, as shortly after the camera reverentially pans over them, we see said landmarks being blown apart. Their trashing is meant to convey emotional impact – although such a shock is lost on international audiences. (Indeed, the biggest cheer that Independence Day received when I saw it theatrically in Wellington, New Zealand was amusingly enough the blowing up of the White House, which tends to suggest that there is a strain of anti-American imperialism that runs deeper that one might think in the country).

Independence Day is, when it comes down to it, nothing other than a good old-fashioned call to American patriotism. Even the title sources one of the central holidays on the American calendar – July 4th, the adoption of the Declaration of Independence. There is a nod towards an international effort to fight back against the aliens but there is not a single character with a speaking part in the film that is not an American. The heroism, the simple emotional connections the film makes and its desire to play on the patriotic sentimentalism of national iconography are the exact same appeals that party political broadcasts operate on.

Alien invasion films when they come down to it are like the Rorschach inkblots used by psychologists. In that nobody knows what an alien looks like, any conception of what an alien is is necessarily a projection and one that inevitably reveals more about the underlying prejudices of the filmmakers and the society they come from than they do about the filmmaker’s capacity for imaginative projection. Alien invasion films of the 1950s were not so much about the fear of invasion but about an underlying fear of Communism and social division; Star Trek (1966-9) was always a flag carrier for the Kennedy era and the Peace Corps; E.T.– The Extra-Terrestrial (1982) was not about alien contact but an underlying wish fulfilment for a return to family values.

Independence Day is less about alien invasion than it is about 1990s political anxiety – its underlying theme is one of America being trounced but rediscovering its national unity and coming back in fired-up fighting form. What is perhaps surprising about all this outright, overt flag-waving is that it should come from a German director. All of this became even more pronounced in Roland Emmerich’s later The Patriot (2000).

It is interesting to look at Independence Day again in the subsequent light of the World Trade Center and 9/11 attacks. Independence Day almost seems like a rehearsal for 9/11 in its playing out of the sense of outraged nationhood and of the call to red-blooded militaristic nationalism in response to a symbolic attack on American landmarks. Indeed, the Presidents in both scenarios – Bill Pullman here, George W. Bush in actuality – are former Air Force pilots (although Bush failed to measure up to his fictional counterpart by offering to personally lead the attack on Afghanistan or Iraq). The film is equally uncanny in its prediction of a bland unpopular president (Bush Jr) who is suddenly propelled to massive popularity and heroism by taking a red-blooded warlike stance on aggression against America. Like the aftermath of 9/11, Independence Day also taps into the dangerous sentiment that what it took to unite a divided America and allow it to find a common national unity once again was an outside aggressor.

What is also amusing about Independence Day is how diametrically opposed it is to the other view of alien infiltration out there at the time it came out, the one put forth by tv’s The X Files (1993-2002, 2016-8). Both seem to represent opposite wings of a political spectrum. The X Files comes from libertarian paranoia, almost at times seems to rest with the paranoiac distrust of federal government held by Montana militia groups; while Independence Day is set firmly on the Republican centre right. One is utterly paranoid about government, the other regards the establishment as heroes and is a hot-blooded call to nationalism. Most amusing is the point of intersection that the two have – both accept Roswell and Area 51 as gospel truth. The X Files sees these as prime exhibits in a truth that the government or a cabal within it has conspired to keep obscured from the populace; on the other hand, Independence Day accepts these as truth but amusingly enough allows Area 51 to become the central staging point for the strikeback against the alien forces.

Roland Emmerich and Dean Devlin subsequently went onto make the muchly pilloried English-language remake of Godzilla (1998), which is actually a better special effects vehicle than Independence Day, and the non-genre American War of Independence film The Patriot (2000). Emmerich, Devlin and their Centropolis production company have also acted as producers on a number of other films including the flop Crusaders in space comedy The High Crusade (1994), the short-lived alien on Earth tv series The Visitor (1997), the Virtual Reality film The Thirteenth Floor (1999), the giant spider film Eight Legged Freaks (2002) and the post-holocaust film Hell (2011). On his own, Roland Emmerich subsequently made the environmental disaster film The Day After Tomorrow (2004), the prehistoric 10,000 BC (2008), the end of the world film 2012 (2009), the historical non-genre Anonymous (2011) that proposes that Shakespeare’s plays were written by someone else, the action film White House Down (2013), Stonewall (2015) about the birth of the US gay rights movement and the war film Midway (2019).

After parting from Emmerich, Dean Devlin disappeared off the radar apart from producing the odd thing such as Eight Legged Freaks, Cellular (2004), the trio of tv movies The Librarian: Quest for the Spear (2004), The Librarian: Return to King Solomon’s Mines (2006) and The Librarian: The Curse of the Judas Chalice (2008) and subsequent tv series The Librarians (2014-8), the Bermuda Triangle tv mini-series The Triangle (2005) and the tv series Leverage (2008-12) and The Outpost (2018– ). He subsequently directed and wrote the disaster film Geostorm (2017) and the thriller Bad Samaritan (2018).

Roland Emmerich, Dean Devlin and many of the cast reunited for a sequel Independence Day: Resurgence (2016).