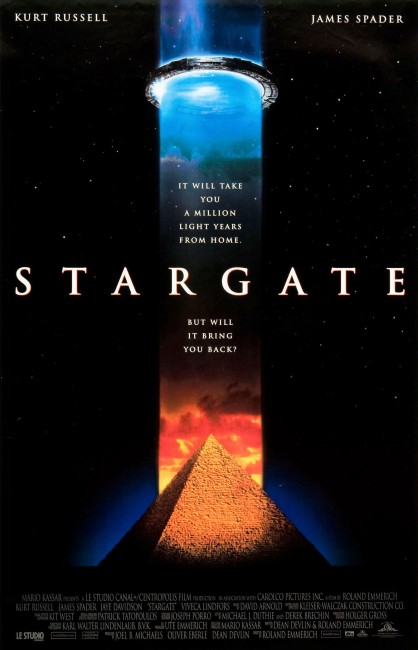 Egyptologist Daniel Jackson is regarded as an academic laughing stock for his views that the Pyramids were not built by The Egyptians. He is then hired by a military thinktank to translate the hieroglyphics on a stone torus. He is startled when the translation reveals that the torus is a stargate for travelling between worlds. He joins a military team headed by Colonel Jack O’Neill to travel through the stargate and investigate the desert world on the other side. There they encounter an alien slave people that Jackson discovers are descendants of Ancient Egyptians. They then meet Ra, an alien being of immense power that possess the body of a native boy and rules the planet with an iron fist.

The fault that becomes apparent with Roland Emmerich and co-writer Dean Devlin’s films is that they are all effects bombast with a heart of cardboard. They reach for simplistic patriotic or genre cliches to tell stories. One did not have any great hopes for Stargate, which seems to have been sold as Erich Von Daniken crossed with Lawrence of Arabia (1962) – the opportunity for scripting idiocy here is as wide as the canvas the film sets itself on.

So it is with some surprise that Stargate turns out to be three-quarters of a good film. The stargate concept, the discovery and exploration of the alien world would never hold up on the literary page but there is at least the sense in the film that these are cliches that are being presented as fresh and new for the first time. There is a fine expanding sense of wonder as the military slowly explore the alien world. Unlike the average Star Trek episode, at least a token effort is made to coming to terms with the linguistic difficulties of contacting new alien species.

Most of all, Roland Emmerich’s sense of scale overwhelms, aided immeasurably by Karl Walter Lindenlaub’s beautiful soft focus photography. Emmerich marshals action on an epic scale – an entire city of people gathered to greet the alien visitors, to watch the execution or rising up in rebellion. The special effects are stunning – the liquid pool of energy as people enter the stargate and the b/w digital look of travelling through it; the amazing sequence of the giant pyramid ship descending during a storm; the bantha-like pack animals; the anubis-headed guards with their morphing suits of armour; the Star Wars (1977)-like fighter ships; colossal nuclear explosions in the void – all fabulous stuff.

Unfortunately, after such a fine build-up, the last quarter of Stargate falls into cliche. Roland Emmerich and co-writer Dean Devlin do not appear to have much of an idea what to do with Ra having introduced him and the rest of the film becomes a torrent of cliches – Earthmen inspiring the alien slaves oppressed by their fake gods to rebellion, the addition of a love interest and a pint-sized sidekick, a last minute countdown, lots of Star Wars-styled shoot-em-ups, even a scene where the love interest is killed but revived at the last minute.

Stargate does demonstrate how sheer crap (namely Erich Von Daniken and his nonsensical claims in the book Chariots of the Gods (1968) and follow-ups of alien visitors being responsible for most of the mysteries of ancient history) can filter down into common acceptance. For more on von Daniken’s theories, see the documentary Chariots of the Gods (1970). One always believed that Erich Von Daniken would have been more interesting as a science-fiction writer than trying to pawn his nonsense off as anthropology. Stargate surely proves it.

The Stargate concept was later spun out, without Roland Emmerich or Dean Devlin’s involvement, as a popular tv series Stargate SG-1 (1997-2007) where Richard Dean Anderson played the Kurt Russell role of the military officer and Michael Shanks took the James Spader part. There the slimness of the concept was overbalanced into an absurd planet-hopping series of adventures with military travelling via the stargate to rescue various races from enslavement by god-like beings. The tv series proved popular and gained a considerable fan following. It also produced two further spinoffs Stargate Atlantis (2004-9) and SGU: Stargate Universe (2009-11), as well as the animated Stargate Infinity (2002). There have also been several Stargate tv movies, spun off from the various tv series. Emmerich has also announced a potential remake throughout the 2010s.

(Winner for Best Special Effects at this site’s Best of 1994 Awards).