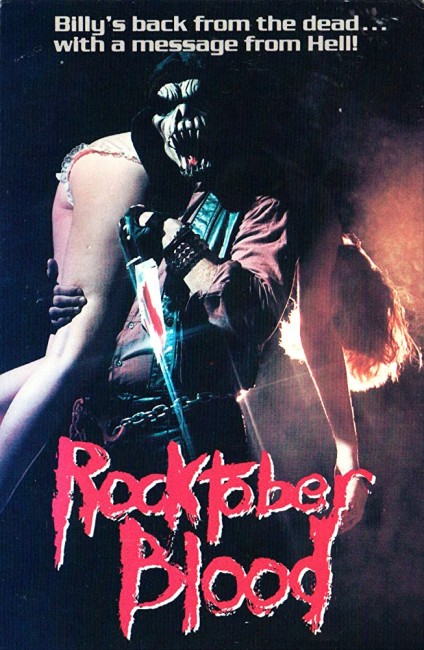 While recording a new album, Billy Eye Harper, lead singer of the band of Rocktober Blood, goes crazy and kills all the others in the studio. The only one to escape is backup singer Lynn Starling. Four years later, two years after Billy has been executed, Lynn returns on tour as Rocktober Blood’s new lead singer. However, Billy appears to be alive again and tormenting her. Even though everyone insists that Billy is dead, Lynn is certain that he has returned from the dead and is killing those around her.

Beverly Sebastian was one of the few woman directors during the great VHS era of genre filmmaking. Beverly had started out several years earlier making drive-in films such as The Hitchhikers (1972), Gator Bait (1973), Flash and the Firecat (1975), Delta Fox (1979) and carried on into the video era with the likes of Gator Bait II: Cajun Justice (1988), The American Angels: Baptism of Blood (1990) and Running Cool (1993). Rocktober Blood was her sole venture into genre material.

The mid 1980s saw a sudden cluster of horror films based around rock music with the likes of Trick or Treat (1986), Rock’n’Roll Nightmare (1987), Slaughterhouse Rock (1987), Black Roses (1988) and Slumber Party Massacre II (1987), as well as heavy metal having an occult influence in The Gate (1987). I am not quite sure why – and it is not as though we hadn’t had rock/horror films before – see The Phantom of the Paradise (1974). I suspect it may have had something to do with many heavy metal and hard rock groups of the era incorporating Satanic imagery and the resultant fundamentalist backlash against this – remember the whole backwards masking nonsense? – and this bleeding over onto film.

Rocktober Blood wants to pose as one of these rock horror films – and was quite possibly the first on the subject to do so. Its rock music is terrible – more someone’s posturing idea of what a badass 80s band should look like than anything that holds any conviction. The film also seems confused about what is going on. It starts out seeming as though it is about a rock star who went mad, killed people and was executed and is now returning from the dead to kill anew. However, in her directorial set-ups, Beverly Sebastian employs slasher movie set-ups – point-of-view tracking shots, gaslighting scenes, long gratuitous bathtub scenes. For something that is a seemingly ghost story, this makes Rocktober Blood a very physical horror film – more like a slasher film than a supernatural horror. The supposedly resurrected killer rather lamely appears in a t-shirt with makeup on his face, for instance.

[PLOT SPOILERS] The absurdly improbable big twist reveals that there is no resurrected rocker, that it was actually his twin who did the killings all along and allowed his brother to take the blame (as though in the midst of a no doubt sensational high profile trial people might be totally oblivious to the fact that the killer has an identical twin who was also lurking around the scenes of the crime).