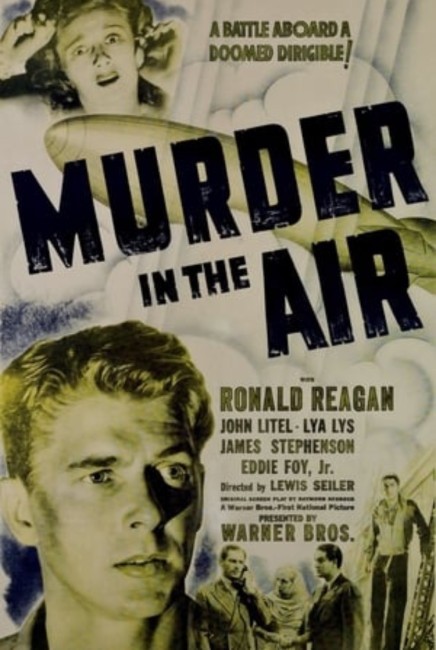 Brass Bancroft and Gabby Watters, two agents of the US Treasury Department’s Secret Service division, are asked to investigate Steve Swenko whose dead body has been found in a train carriage outside Albany. Swenko has $50,000 of forged banknotes on his person and a secret message written in invisible ink hidden inside his shoe heel. Brass is asked to impersonate Swenko to go on to a meeting in California with Joe Garvey, head of The Society for Loyal Naturalized Americans, which is thought to be a front for foreign agents. Brass succeeds in infiltrating the society. However, the Society then handpick Brass/Swenko to sneak aboard the Navy dirigible Mason as it goes on a test flight to try out the experimental Inertia Projector, a ray weapon that is able to neutralise electrical current. The spies plan for Brass/Swenko to sabotage The Mason so that they can steal the plans for the projector.

Murder in the Air was a B support programmer from the 1940s – it only runs to 55 minutes long. It was the fourth and final in a series of films that featured none other than the later-to-be 40th President of the United States, Ronald Reagan, playing US Treasury Agent Lieutenant Brass Bancroft. The other films were Secret Service of the Air (1939), Code of the Secret Service (1939) and Smashing the Money Ring (1940) but none of these contained any science-fictional elements as Murder in the Air does (featuring a ray device that can stop electrical motors).

These types of air adventure hero films were popular during the 1930s/40s, in particular in serials with the likes of Tailspin Tommy (1934), Ace Drummond (1936), Captain Midnight (1942) Spy Smasher (1942) and Blackhawk (1952). Most of these originated on the comic-book page where in addition to the aforementioned there were numerous aviator heroes such as Hop Harrigan, Brick Bradford, Steve Canyon, Johnny Hazard, Bruce Gentry and Smilin’ Jack, not to mention the popularity of the Biggles books in print.

The Brass Bancroft films weren’t serials, although could easily have been. One amusing thing that does occur is that Brass Bancroft acts as a US Treasury Agent. When you consider that the US Treasury is largely concerned with the country’s revenue gathering and spending, this makes Brass Bancroft possibly the first (and only) ever action hero to be an accountant. Of course, what the films were probably drawing on was the popularity during the 1930s of the real-life figure of Elliot Ness, the Treasury Agent who busted Al Capone for tax evasion. In practice, what we end up with is an odd mixture of air adventure story where the hero also happens be a treasury agent.

It became customary with Ronald Reagan’s ascendancy to the Presidency to regard every film he ever appeared in as bad movie material. One suspects that this may have had more to do with the freakshow appeal of looking back at Reagan’s entirely undistinguished acting career – somehow I can’t quite bring myself to wade through his body of films in order to reach any decision. Here an ungainly Reagan plods through the part with a dull lack of charisma. To be fair this is something that makes Reagan merely another lead in the B-support films and serials of the day whose heroes were all a singularly forgettable bunch. Going by the role here, Reagan lacked any kind of essential charisma or screen presence – almost certainly, were it not for his move into politics, his acting career would have been a forgotten footnote in history.

Seemingly in fitting with the presence of Ronald Reagan, Murder in the Air has an intriguing political dimension to it (a lot more so than other films of the era). It was made eight months after England and most of Europe had entered into World War II (although the US would not join in for another year-and-a-half). The plot concerns a fifth column of foreign (European) agents who have a rather unclear agenda. When pressed, the head agent (James Stephenson) insists that he is a loyal American and that the society’s aims are to “preserve American neutrality at all costs” (following America’s decision to remain out of the war that Europe was embroiled in, up until the Japanese bombing of Pearl Harbour in 1941). Later it is implied that the Society is allied with acts of “unlawful assembly” and labour riots, two of the major issues that were seen as seditious in America of the 1930s (along with counterfeiting and breaking Prohibition).

The action in Murder in the Air is routine. There is one good scene during the middle where dead man Steve Swenko’s wife Lya Lys turns up at the hotel room, finds that Ronald Reagan isn’t her husband and he is forced to pacify her by bluffing his way out of it, only for her to pass clues on to a man waiting in the hotel lobby by writing a message on her makeup mirror with her lipstick while pretending to fix her face at the same time as Reagan likewise manages to pass a message to Eddie Foy, Jr by asking for a match to light a cigarette and slipping a note inside the matchbook. It is a sequence that has a smooth dance to it and had it been handled by a much more talented director could really have been something – indeed, you could easily imagine it as taking place in an Alfred Hitchcock film of the era.

One of the great thrills about Murder in the Air is in seeing film footage of dirigibles in action (albeit stock footage), bringing back a lost era of air travel. (There is also some exciting stock footage of prop-driven planes in aerial combat that climaxes the film). The film attempts to mount a climactic action sequence aboard a dirigible but this falls down due to lack of a proper budget. This is particularly evident during the scenes where the dirigible crashes into the ocean. All that we see of the rescue is some stock footage of Coast Guard ships and the crew exiting a ramp to a rescue vessel but not the vessel itself. There is a model of the airship sinking but no closeups, just the same model used for wide angle shooting, while the film makes no effort to show Reagan or any of the crew struggling to escape as the airship starts going underwater. Almost any modern film would have pumped this up into a major dramatic sequence of some twenty minutes or more.

There is a lot of comic relief with Eddie Foy, Jr as Reagan’s offsider. Foy plays the role as a nervous bumbler and the film caters to this with a lot of comic scenes where he is perpetually calling his girlfriend (Helen Lynd) and apologising for postponing their pending nuptials or various shenanigans with collapsing beds and his constant complaints and nervousness about almost everything that happens. It is however hard to see how such a constantly maladroit character could ever be considered competent enough to become a law enforcement official.