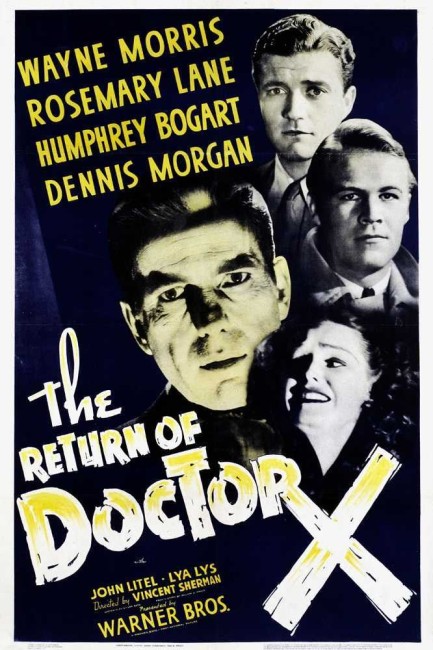 Journalist Walter Garrett goes to interview actress Angela Merrova. When he arrives at her hotel, he finds that she has been stabbed to death. He calls the police but when they arrive the body has vanished. He prints the story nevertheless. However, the next day he is fired when the very much alive Angela sues the newspaper. Seeking to clear his name, Garrett investigates. He becomes embroiled in the series of murders where all the victims have the same rare blood type. The trail leads to blood specialist Dr Francis Flegg who has found a means of reviving the dead using electricity. Garrett discovers Flegg has brought executed child-killer Dr Xavier back to life but that the process requires the regular replenishment of the rare blood type.

The single footnote that The Return of Dr X usually receives in film annals is to be noted as being the only horror film to have starred Humphrey Bogart. To get it over with, yes, Bogart does appear, but he is not top-billed and gives an entirely forgettable performance as a twitchy, neurotic lab assistant in white streaked blitz haircut. Bogart was not the big name he would become a couple of years later after the successes of High Sierra (1941), The Maltese Falcon (1941) and Casablanca (1942) and at the time was under contract to Warner Brothers.

Subsequently, Bogart spent some time reviling The Return of Dr X and made the claim (something that one regards somewhat dubiously) that he made the film under great duress from Jack Warner who forced him to accept the part. Most people since have echoed Bogart’s comments and looked down on the film, giving it a turkey reputation today, although it is not entirely that bad.

The film tried to bill itself as a sequel to the much superior Doctor X (1932) but this is a connection that is slim to the point of non-existence. For one, The Return of Dr X claims to have the child killer Dr Xavier being revived from the dead but in the original film Dr Xavier was actually the hero and not the killer, while the actual killer was never mentioned as having murdered any children.

The film offers up a standard and predictable run through the 1930s mad scientist formula, nevertheless is cleverly put together. There is an intriguing opening as journalist Wayne Morris goes to interview actress Lya Lys to instead find her dead body; where he calls the police, only to find that the body has vanished; where he then writes a scoop about it, only to be fired when she turns up alive and sues the paper.

There is an element of predictability to it – there are no surprises in guessing the identity of the villain and one can foresee exactly what is going to happen from the first mention of ‘blood’. However, for the time the film was made, it was a novel and interesting attempt to combine the mad scientist genre with the vampire theme, something that had never been done before.

It is well directed by Vincent Sherman with resort to German Expressionism. Almost every closeup and medium shot comes underlit, with huge bloated shadows thrown onto blank walls. All the gruesome scenes – Angela’s death, the hooking of her up to the blood transfusion – are shown entirely in shadow. The world presented in the film has a stylised unreality to it – the streets are without people and have a glossy studio-bound dream-like quality, while Lya Lys is photographed in a lustrous black-and-white to appear as a gorgeous vamp.

Humphrey Bogart’s neurotic performance is overdone, although he had an undeniably creepy presence. John Litel predictably proves to be the mad scientist from the moment we see his eccentricity – wearing a monocle and Mephistophelean goatee and pompously philosophising about the importance of blood – however the film doesn’t entirely make him the villain and shows surprising sympathy for him. Wayne Morris’s hero is one of the smart alec reporter types popular during the era and his ‘gee-golly’ performance wears on the nerves today.