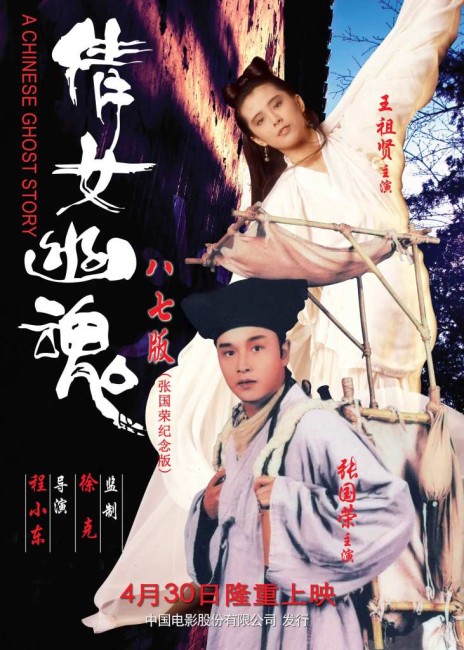 The ineffectual young tax collector Ning Tsai Tsen arrives in a town to collect taxes. Nobody will offer him a bed so he is forced to seek shelter at a reputedly haunted temple on the outskirts of town. There he meets the warrior monk Yen Chi Hsia and the beautiful Nieh Hsiao Tsing. He falls for her, unaware that she is a ghost – a soul captured by the evil Matron and sent forth to tempt men and steal their lifeforces. Telling Ning Tsai Tsen her story, Nieh Hsiao Tsing begs him to take her ashes to freedom so that she can have the chance of reincarnation and be saved from betrothal to Lord Dark. However, this is something that requires Ning Tsai Tsen and Yen Chia Hsia to journey down into Hell.

A Chinese Ghost Story is perhaps the finest example of Hong Kong fantasy cinema. This genre had grown out of various Shaw Brothers films of the 1970s and was crystallised with Tsui Hark’s Zu: Warriors from the Magic Mountain (1983), a lunatic film in its own right. (Tsui aso acts as producer here). However, it was A Chinese Ghost Story that became a landmark within the genre and an oft-imitated template for other films. Trying to pigeonhole A Chinese Ghost Story makes one’s head spin. Imagine a film part Star Wars (1977) and a whole lot Shaw Brothers. Or else maybe Kwaidan (1964), as directed by Sam Raimi in full-on The Evil Dead (1981) mode. It is all of these and more.

A Chinese Ghost Story is a grandiosely beautiful film. Ching Siu-Tung’s direction is an extraordinarily dexterous blend of lightning-paced action and startlingly beautiful imagery, all directed entirely tongue-in-cheek. The martial arts sequences are amazingly stylised, with opponents performing unbelievable gymnastic acts, twirling about in mid-air and travelling by bouncing off trees or by hanging onto thrown swords, where Ching Siu-Tung’s camera is poised with a lightning finesse to catch every sword-blow in mist-illuminated silhouette.

There are mind-boggling scenes fighting off a giant flaming slime-slavering tongue as it crashes through entire houses to try penetrate its victims’ throats; and an even more visionary descent down into a Hell filled with walls of grasping hands and devouring female faces, lorded over by a metal-masked Darth Vader look-alike. Joey Wong flies through the air as a ghostly train of silk, whipping people about enwrapped in her sleeves.

One amazing sequence has hero Leslie Cheung hiding under the water in Joey Wong’s bath trying to avoid detection by the androgynous, human-sniffing Matron while Joey passes air to him via kisses. Ching Siu-Tung also balances this out with an amusingly self-effacing sense of humour, with Leslie Cheung stumbling into situations completely oblivious to the danger about him. And then there is an indescribable scene where Wu Ma starts leaping about in mid-air and bursts into a rap song that goes on about the peaceful virtues of the Buddhist lifestyle. See A Chinese Ghost Story at all costs – it will change your life.