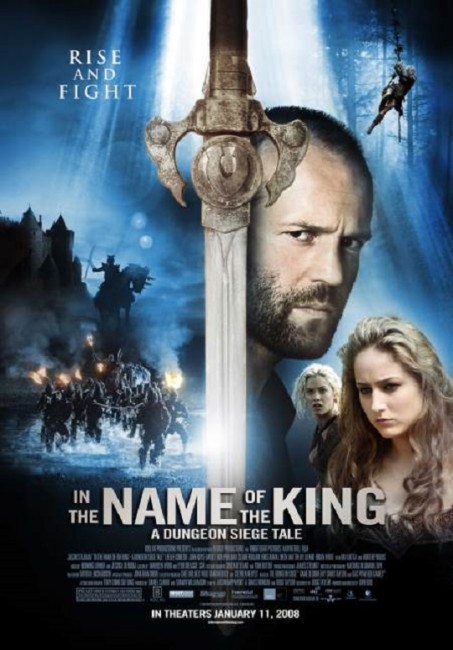 In the land of Ehb, the man known only as Farmer lives near the village of Stonebridge with his wife Solana and son Zeph. Suddenly the village is attacked by marauding Krug creatures. Farmer fights back but Solana is captured and he is unable to prevent Zeph from being killed. King Konreid comes, wanting to raise an army against the Krugs but Farmer turns away to go in search of Solana himself. Behind the Krug attacks is the sorcerer Gallian who desires all power for himself and has devised a means to control the Krugs. Gallian is collaborating with Konreid’s treacherous nephew Duke Fallow who desires to unseat his uncle and snatch the crown for himself. As Farmer searches across the land, he reluctantly becomes drawn into the fight against Gallian and the Krugs and comes to discover his true heritage as the king’s long lost son.

I am not convinced that Uwe Boll is the world’s worst director as a number of people (particularly in the blogosphere) seem fanatically determined to argue. Boll is at worst a B-budget hack who has strayed onto an A-budget. There are some bad parts about his films – notably some of his casting choices – but he does make films where the action moves well and with a sufficiently dramatic flourish. His scripts are often boneheaded and he does play fast with the canon of the videogames that he seems to prefer to adapt but then that is an accusation that could be made of fairly much every videogame-adapted film – see also Super Mario Bros. (1993), Street Fighter (1994), Wing Commander (1999), Lara Croft, Tomb Raider: The Cradle of Life (2003), Doom (2005). Those who decry Uwe Boll’s name surely have not seen enough B movies, one suspects. Uwe Boll’s films at least seem to be getting better – he makes 2-3 films a year and the sheer proliferation of product is starting to add up in terms of overall improvement. In the Name of the King: A Dungeon Siege Tale even approaches something it sounds heretical to say – an Uwe Boll film that is quite good. (There probably goes my credibility as a critic).

As with most of Uwe Boll’s films, In the Name of the King: A Dungeon Siege Tale is based on a video/computer game. In this case, the game is the sword-and-sorcery based Dungeon Siege (2002) from Microsoft Game Studio. Boll, perhaps taking frequent criticisms of himself for such to heart, does follow gameplay fairly closely in the story of a nameless farmer in the kingdom of Ehb setting out on a quest after the evil Krug decimates the town of Stonebridge, although his destiny in becoming the king of the land, along with his purpose to save his wife, has been invented for the film.

With In the Name of the King: A Dungeon Siege Tale, Uwe Boll shows that he is one of the better directors to jump aboard the epic fantasy/sword and sorcery fad created by Peter Jackson and his Lord of the Rings trilogy. We have had a number of other films and filmmakers trying to recapture what Jackson did – Earthsea (2004), The Chronicles of Narnia: The Lion, The Witch and the Wardrobe (2005), Eragon (2006), The Golden Compass (2007) – but most are stuck down at the level of being imitators. Uwe Boll is no different but at least he demonstrates the ability to wield the tropes of the genre with a visual flourish, something the directors of the abovementioned have not.

If nothing else, Boll makes In the Name of the King: A Dungeon Siege Tale look good. The fantasy landscape comes with a beautiful sweep, taking in digitally created castles and strongholds, forestals twirling out of the trees, Jason Statham tilling fields of crops and an entire village that the production design team appear to have built for the film, not to mention the requisite Jackson-esque helicopter shots sweeping across tiny figures as they cross mountains. The land is created with a density of detail that gives the impression it is a living, breathing world – when we move through Stonebridge, it has the feel of an inhabited town.

The action scenes are choreographed by Tony Ching Siu-Tung, the celebrated Hong Kong director of films like A Chinese Ghost Story (1987) and sequels, Swordsman II (1992) and The Heroic Trio (1993) and action choreographer on films like Hero (2002) and House of Flying Daggers (2004). Ching Siu-Tung gets it together for a marvellous battle scene in the forest with armies clashing where we do see the full scale of the conflict (and without it looks like too much in the way of digital trickery either). There is also a fine climactic showdown between Jason Statham and Ray Liotta involving swordfights conducted with mid-air flips, slow motion moves, rolls and backflips, Liotta magically levitating swords and creating whirlwinds of books to crush Statham. If anyone doubts that Uwe Boll is improving, contrast the forest battle scenes here with the absurd Bullet Time zombie attacks in House of the Dead (2003). There is the odd part that does fall down – like the laughable image of Jason Statham wielding a boomerang to dispatch a flock of annoying crows – is there any other weapon in a hero’s arsenal that could look more absurd on screen?

The one thing that you cannot deny is that for all his bad moviemaker reputation, Uwe Boll has managed to corral an amazing cast – names like Jason Statham, one of the top-action stars in the world at the moment, Burt Reynolds, Matthew Lillard, the lovely Claire Forlani, Leelee Sobieski, the always worthy Ron Perlman and John Rhys-Davies (in another Lord of the Rings connection). The problem with In the Name of the King is, as is often the case with many of Uwe Boll’s films, that his casting choices shoot the film’s credibility in the foot – who can forget Ben Kingsley cast as the vampire king in Bloodrayne (2005)?

In the Name of the King opens with great sweep across the fantasy landscape and arrival at the castle – but credibility sinks the moment we see that the king is none other than Burt Reynolds and with Shaggy himself Matthew Lillard sitting beside him chewing on a bone of meat. Both actors are unfortunately strongly identified with their screen personas – Burt Reynolds as a macho leading man in the 1970s, Matthew Lillard as a stoner in frat rat comedy roles – such that it is near impossible to dissociate one’s suspension of disbelief.

Most of those present give passable if not standout performances. The one guilty offender is Matthew Lillard who gives an awful and loud performance, seemingly either under the influence of some controlled substance and/or the conviction that he is the star of the show and can outperform everybody else present by acting like a madman. Ray Liotta is another of the film’s bad miscastings. Liotta simply cannot do the dark, imperious lord role that Christopher Lee perfected and comes out as a combination of both wooden and campy at the same time.

Uwe Boll made two sequels sequel with In the Name of the King: Two Worlds (2011), although this features none of the cast from this film and involves Dolph Lundgren as a present-day soldier thrown into the same fantasy world a few years on, and In the Name of the King 3 (2014) starring Dominic Purcell as another former soldier thrown into the kingdom. These are only sequels to the film but are unrelated to the computer game.

Uwe Boll’s other genre films are:- the serial killer film Sanctimony (2000); the backwoods horror Blackwoods (2002); the high school shooting rampage film Heart of America: Home Room (2002); the zombie film House of the Dead (2003); the monster movie/videogame adaptation Alone in the Dark (2005); the vampire hunting videogame adaptation BloodRayne (2005) and its sequels Bloodrayne: Deliverance (2007) and Bloodrayne: The Third Reich (2011); the videogame adaptation Postal (2007), a surreal bad taste satire about a shooting rampage; Seed (2007) about an executed killer returned from the grave; the videogame adaptation Far Cry (2008); Rampage (2009) about a man on a shooting spree and its sequels Rampage: Capital Punishment (2014) and Rampage: President Down (2016); Stoic (2009) about sadism and brutality in a prison; The Final Storm (2010) about an apocalyptic storm and the arrival of a mysterious stranger; the gonzo bad taste comedy Blubberella (2011) about an overweight vampire heroine; Assault on Wall Street/Bailout: The Age of Greed (2013) about a man on a shooting spree against bankers; and a segment of the horror anthology The Profane Exhibit (2013). Boll has also produced the ghost story They Wait (2007), Alone in the Dark II (2008), Zombie Massacre (2012), Legend of the Red Reaper (2013), Prisoners of the Sun (2013), Morning Star (2014), Viy (2014), Anger of the Dead (2015), Zombie Massacre 2: Reich of the Dead (2015) and Jack Goes Home (2016). Fuck You All: The Uwe Boll Story (2019) is a surprisingly insightful documentary about Boll and his career.