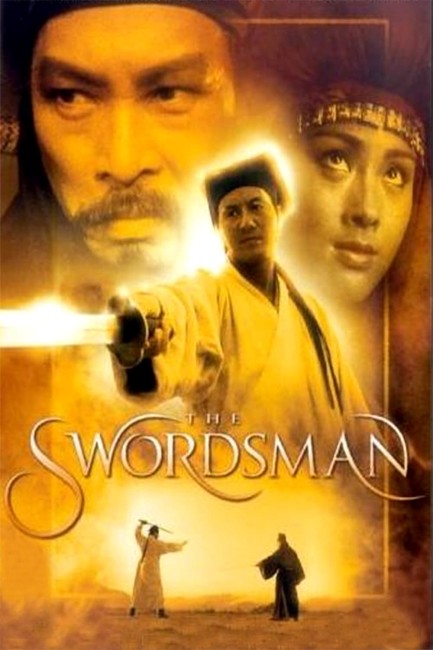 The Emperor discovers that someone has stolen the Sacred Scroll from the imperial library. The thief is eventually found to be former imperial employee Lam Chum Nam. Imperial troops surround Lam’s house just as Ling Wu Chung arrives from the Wah Mountain martial arts school, along with his assistant Kiddo (who is in fact a girl disguised as a man). Before he dies, Lam gives Ling the location of the family treasure to pass onto his son. Ling and Kiddo are now hunted by Zhor, an invincible assassin with the hands of steel sent by the emperor, as well as Ngok, the head of the Wah Mountain school who has perverted the school’s code and wants to obtain the scroll for his own gain.

Swordsman was the beginning of the modern Wu Xia and flying swordsman renaissance. Its moves were copied by films such as Butterfly & Sword (1993), A Warrior’s Tragedy (1993), The Legend of the Flying Swordsman (2000) and of course Crouching Tiger, Hidden Dragon (2000). The swordplay film was a well-established genre within Hong Kong martial arts cinema but Swordsman‘s particular ingenuity was in crossbreeding it with the wildly fantastical moves of films like Zu: Warriors from the Magic Mountain (1983) and A Chinese Ghost Story (1987). Director King Hu had made a host of early flying swordsman and Wu Xia films going way back to the 1960s, including the likes of Come Drink With Me (1966), Dragon Gate Inn (1966), A Touch of Zen (1969), The Fate of Lee Khan (1973), The Valiant Ones (1974), Legend of the Mountain (1979), The Invincible Ones (1982).

Swordsman was produced by Tsui Hark, who had directed Zu: Warriors from the Magic Mountain and produced A Chinese Ghost Story, and the action scenes co-directed by Chin Siu-Tung, who had directed A Chinese Ghost Story. All the moves that would become a familiar staple of the flying swordsman genre are set out here – mid-air combat, people bouncing off trees and flying off into the air, remote punches that can demolish entire buildings, swords whipped through the soil creating whirls of dirt.

It is flashy and entertaining, although seeing Swordsman after some of the subsequent entries, none of the moves particularly stand out. It was not the best – it was merely one of the first of these types of films. (Apparently, King Hu and Tsui Hark did not get on and Hu walked off set a few weeks in with the film being completed by others subsequently). In fact, the film that followed, Swordsman II (1992), is one of the finest of the genre. Nevertheless, it works likeably.

Swordsman is adapted from a novel and as a result has a more complex plot than these films usually do. However, trying to follow the various clans and factions and the fact that some of the characters are impostors and change sides throughout makes it hard to follow. The film also successfully imports the bubbliness of Hong Kong comedy – there is a good deal of engaging interplay between the hero and his crossdressing female sidekick. As the hero, Sam Hui has an irrepressible perkiness of expression that is delightful.